Founded in 1812, Lycoming College is located in Williamsport, Pennsylvania. One of the 50 oldest colleges in America,[2] Lycoming enrolls 1400 undergraduate students from over 28 states and 12 foreign countries. Eighty percent of the college's students live on campus. Lycoming College is affiliated with the United Methodist Church but operates as an independent institution.[3] 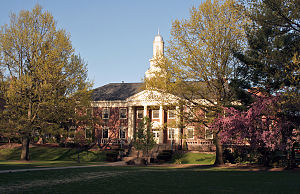 The Carnegie Foundation has classified the College as a "Baccalaureate College – Arts & Sciences". However, using more detailed categories of the newly revised Carnegie Classification system, Lycoming is found to be one of only 44 colleges in the nation to confer over 80% of its degrees in the arts and sciences, to focus exclusively on undergraduate education, to be small in size, to be "selective" or "more selective" in admissions, and to have a majority of full-time students residing on campus.[4]

Special academic programs include a scholars program, internships opportunities, a Washington Semester, pre-law and health profession advising, a cooperative program with Duke University's Environmental Science & Forestry program,[9] an accelerated MBA program with the College of Business at Rochester Institute of Technology,[10] the Clean Water Institute, the Institute for Management Studies and the Center for the Study of Community and the Economy.[11]

Twenty-two buildings sit on Lycoming's 42-acre campus. Most buildings have been constructed since 1950. A 12-acre athletic field and football stadium lie a few blocks north of the main campus.

Lycoming College has an outstanding music program. Students have the option of participating in the band, choir, chamber choir, tour choir, jazz band, music lessons, and various small ensembles. The choir performs around Williamsport at local churches throughout the year. The band has approximately 66 members and plays at events such as football games and graduation.[15] The music department also boasts the Lycoming College Tour Choir. For their 2010 season, the tour choir will perform on two weekend tours, a spring break trip through Virginia and North Carolina, and an overseas tour in May to Argentina.[16]

The origins of Lycoming College date back to 1812 and the founding of the "Williamsport Academy for the Education of Youth in the English and other Languages, in the Useful Arts, Science and Literature". This was the name under which the school was incorporated. At the time, Williamsport's population was approximately 350 persons. Attendance was by subscription, although a state grant ensured that a number of poor children would be taught free of charge. The institution also has educated both sexes from its inception.[citation needed]

By 1847, Williamsport had a public school system in place. Rev. Benjamin H. Crever, a circuit-riding Methodist preacher based 30 miles (48 km) away in Milton, heard that the Academy was for sale. Upon his recommendation, the Baltimore Conference purchased the school which opened in the fall of 1848 as the Williamsport Dickinson Seminary, a preparatory school for Dickinson College, another Methodist school. Rev. Crever is considered to be the founder of Lycoming College. After turning the Williamsport Academy into an institution of higher learning, Crever moved on to serve as a chaplain in the Civil War and to found a total of four schools. Only Lycoming College remains as his educational legacy.[citation needed]

By 1921, the Seminary had gained a reputation for excellence, when Dr. John W. Long took office as its ninth president. Under Long, the institution added junior college courses and, in 1929, became the first accredited junior college in Pennsylvania.[citation needed]

In 1947, the institution, again under Dr. Long, became a four-year college of the liberal arts and sciences. In 1948, it officially changed its name to Lycoming College, taking the name from that of the local county. The name "Lycoming" comes from the Native American word lacomic meaning "great stream". In 1949, the College conferred its first baccalaureate degrees.[citation needed]

Dr. James E. Douthat became the 14th president in 1989. Under his leadership, the College's enrollment has grown by 27 percent, and its endowment and other funds under management have increased from 17 million to over 185 million. Since his arrival, the campus has been involved in strategic planning processes, the establishment and implementation of a new faculty governance structure, a major capital campaign, building program, and the adoption of a revised curriculum for the College. In 2013, retiring President Douthat was cleaning out a closet in his office when he stumbled on a rather uncommon historical document that had been lost for years: a certificate signed by President Abraham Lincoln in 1863 that named the college’s founder a Civil War chaplain.[17]

In the 2004 motion picture "Enduring Love," actress Samantha Morton's character Claire wears a Lycoming College sweatshirt in two scenes that take place in her artist studio and at a foundry.

The following have attended Lycoming College or its predecessor institutions: