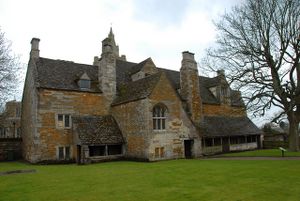 Lyddington Bede House is a historic house in Rutland, England, owned and opened to the public by English Heritage. The existing Grade I listed building[1] is a part of a former palace of the Bishops of Lincoln, situated next to the church in the village of Lyddington. The watch tower or gazebo is separately listed as Grade I[2] and the boundary walls are Grade II.[3] The site is a scheduled ancient monument.[4]

The medieval Diocese of Lincoln was the largest bishopric in England, extending from the River Thames to the Humber Estuary. Lyddington lay on a north-south road and the estate here was a convenient place for the bishop's entourage to stop when traversing the diocese.

After the Reformation, ownership passed to the Cecil family who made it their private house. By 1600 it had passed to Thomas Cecil, 1st Earl of Exeter, son of Lord Burghley, who converted it into an almshouse for twelve poor bedesmen and it continued in this use until 1930. A feature is the former bishops' Great Chamber with its beautifully carved ceiling cornice.

The remains of the fishponds of the bishop's palace are nearby.