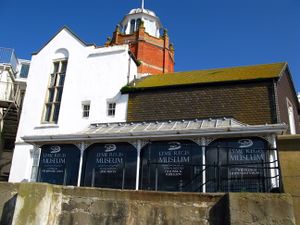 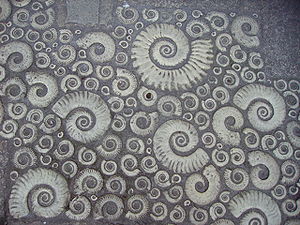 Coade stone fossil ammonites in the pavement outside the museum.

The Lyme Regis Museum (also previously known as The Philpot Museum[1]) is a local museum in the town of Lyme Regis on the Jurassic Coast in Dorset, England.

The museum building was commissioned in 1901 by Thomas Philpot, a relative of the fossil collector Elizabeth Philpot, hence the name.[2] The architect of the building was George Vialls, who also designed the nearby Guildhall (now the Town Hall).[3] It is built on the site of the birthplace and home of the fossil hunter Mary Anning. The family also ran a shop here.

The collections and subject areas exhibited include fossils from the surrounding area dating from the Jurassic period, geology, local maritime history, memorabilia, and writers associated with the town such as Jane Austen and John Fowles. The curator at the museum is Mary Godwin.[4]

An ornate example of Coade stone work, in the form of ammonites is set into the pavement outside the museum, reflecting both local history (specifically Eleanor Coade, the inventor of Coade stone) and the palaeontology for which Lyme Regis is well known.