From Infogalactic: the planetary knowledge core
Jump to: navigation, search
For other uses, see Lymington (disambiguation).

Lymington /ˈlɪmᵻŋtən/ is a port town on the west bank of the Lymington River on the Solent, in the New Forest district of Hampshire, England. It is to the east of the South East Dorset conurbation, and faces Yarmouth on the Isle of Wight, to which there is a car ferry service operated by Wightlink.

The town has a large tourist industry, based on its proximity to the New Forest and its harbour. It is a major yachting centre with three marinas. According to the 2011 census, the Lymington urban area had a population of 15,407. If the nearby parish of Boldre, including Walhampton, is added, the population in 2011 was 17,410. 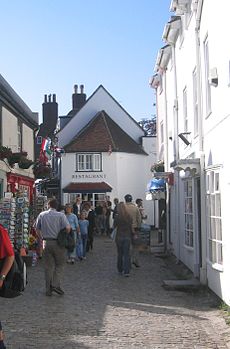 The earliest settlement in the Lymington area was around the Iron Age hill fort known today as Buckland Rings. The hill and ditches of the fort survive, and archaeological excavation of part of the walls was carried out in 1935. The fort has been dated to around the 6th century BC. There is another supposed Iron Age site at nearby Ampress Hole. However, evidence of later settlement (as opposed to occupation) there is sparse before Domesday book (1086).

Lymington itself began as an Anglo-Saxon village.[1] The Jutes arrived in the area from the Isle of Wight in the 6th century and founded a settlement called Limentun.[citation needed] The Old English word tun means a farm or hamlet whilst limen is derived from the Ancient British word *lemanos meaning elm tree.[2]

The town is recorded in Domesday as "Lentune". About 1200, the lord of the manor, William de Redvers created the borough of New Lymington around the present quay and High Street, while Old Lymington comprised the rest of the parish. He gave the town its first charter and the right to hold a market.[3] The town became a parliamentary borough in 1585 returning two MPs until 1832, when its electoral base was expanded. Its representation was reduced to one MP under the Second Reform Act of 1867. It was subsumed into the New Forest Division under the Redistribution of Seats Act 1885.

Lymington was famous for making salt from the Middle Ages up to the 19th century. There was an almost continuous belt of salt workings along the coast toward Hurst Spit.

In the 18th and early 19th centuries, Lymington possessed a military depot that included a number of foreign troops – mostly artillery but also several militia regiments. At the time of the Napoleonic Wars the King's German Legion-Artillery was based near Portchester Castle and sent sick soldiers to Lymington or Eling Hospital.[4] As well as Germans and Dutch, there were French émigrés and French regiments.[5] They were raised to take part in the ill-fated Quiberon Invasion of France, from which few returned (contrast the Battle of Quiberon Bay, or Bataille des Cardinaux, a 1759 victory).

From the early 19th century, Lymington had a thriving shipbuilding industry, particularly associated with Thomas Inman, builder of the schooner Alarm, which famously raced the American yacht America in 1851.[6] Much of the town centre is Victorian and Georgian, with narrow cobbled streets in the area of the quay, giving an air of quaintness.

Lymington particularly promotes stories about its smuggling; there are unproven (unlikely) stories that under the High Street are smugglers' tunnels that run from the old inns to the town quay.

Lymington was one of the boroughs reformed by the Municipal Corporations Act 1835. In 1932 the borough was extended to include Milton (previously an urban district), the parishes of Milford on Sea and Pennington, and parts of Lymington Rural District, so extending it along the coast to the edge of Christchurch.[7]

The borough of Lymington was abolished on 1 April 1974 under the terms of the Local Government Act 1972, becoming an unparished area in the district of New Forest, with Charter Trustees. The area was subsequently divided into the four parishes of New Milton, Lymington and Pennington, Milford-on-Sea and Hordle. 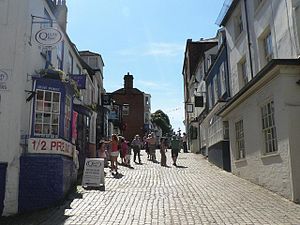 Due to changes in planning legislation, many older areas of the town have been redeveloped. Houses have been demolished and replaced with blocks of flats and retirement homes. In a Channel 5 programme, Lymington received the accolade of "best town on the coast" in the UK for living (ahead of Sandbanks), for scenery, transport links and low crime levels.[citation needed]

Lymington New Forest Hospital opened in 2007, replacing the earlier Lymington Hospital. This has a Minor Injuries Unit but no Accident and Emergency. The nearest emergency departments are at Southampton General Hospital which is 16 miles (25.7 km) away and Royal Bournemouth Hospital which is 14.5 miles (23.3 km) away.

The main Anglican parish church is the St Thomas in the high street.

The northern neighbourhoods of the town are Buckland and Lower Buckland, the latter adjoining the Lymington River. However, due to confusion with Buckland, Portsmouth, also in Hampshire, many people refer to themselves and their businesses here solely as Lymington. The poet Caroline Anne Bowles (1786–1854) was born at Buckland Manor and died at Buckland Cottage.[8]

Pennington is a village now contiguous with Lymington, forming its south-west part and partly separated by several schools with playing fields. Upper Pennington is a northern residential offshoot of Pennington, more rural in character, almost entirely surrounded by heath and farmland. 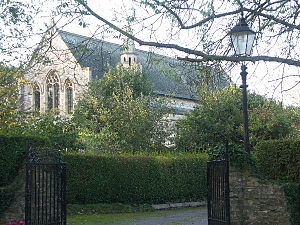 Woodside consists of a small southern triangle of residential roads, gardens and a cricket ground, which includes a manor house,[9] church community hall, and All Saints, Lymington. The church was built in 1909 by W. H. Romaine-Walker, architect of Danesfield House, Moreton Hall and the Tate Gallery extension, and a student of the High Victorian architect George Edmund Street.[10]

This is a coastal hamlet by a very small dock, salterns and estuary. It includes the buildings Normandy Garth, Little Normandy and Normandy Farm. The last backs onto De La Warr House, an early 19th-century listed building.[11] 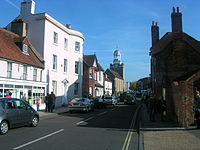 The high street has seen rapid change over the last few years, with an increasing presence of chain stores and coffee shop franchises. There is a local market, one of the New Forest producers markets, held at the Masonic hall once a month in the game season. There are several marine outfitters in the cobbled street leading down to the quay.

Lymington has a wide range of shops and a large street market in the High Street, as well as three supermarkets: Waitrose, Tesco, and M&S Simply Food. Local campaigns have resulted in the rejection of proposals for the opening of branches of the Argos retail and in 2010 the Wetherspoon's pub chain.[12] However, a second proposal by Wetherspoons in 2012 was successful and a pub named 'The Six Bells' was completed in 2013.

Lymington, like the rest of the South of England, has a maritime climate of warm summers and mild winters. The nearest official Met office weather station for which online records are available is Everton, about 2 miles to the west of the town centre. Thanks to coastal position, sunshine levels are high relative to the rest of Britain, and severe frost unusual. The coldest recorded temperature in 43 years of records was −11.1 °C (12.0 °F) in January 1963.[13] The highest locally recorded temperature was 33.5 °C (92.3 °F) in June 1976.[14]

The proximity of the New Forest makes Lymington a good base for walking, cycling and riding.

Lymington is famous for its sailing history, and in recent years has been home to the world-famous regattas such as the Royal Lymington Cup, Etchells Worlds, Macnamara's Bowl, and Source Regatta. The strong tides make it a challenging race track, and together with the shallow depth of the river has resulted in Lymington losing a lot of regattas to the Central Solent, principally run from Cowes. Nevertheless, Thursday Evening Racing takes place with up to 100 boats registered to race every Thursday night during the summer, hosted by the Royal Lymington Yacht Club. Started in the 1990s, this has become increasingly popular.

Lymington has a Non-League football club, Lymington Town F.C., which plays at the sports ground.

Lymington has a Rugby Union club, Lymington Mariners RFC, which plays at Woodside Park. The club has two teams. It meets every Thursday evening for practice and most Saturday afternoons for tournament games in the Hampshire region, and friendlies around the South of England. 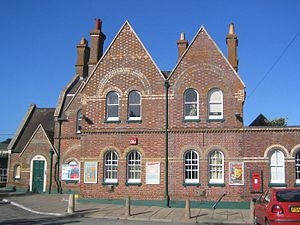 Lymington bus station is owned by Wilts & Dorset, who also owns a bus depot in the town. Numerous local services are operated, as well as routes to Bournemouth and Southampton. In the summer, the New Forest Tour serves the town with open-top buses.

Lymington has two railway stations: Lymington Pier (the terminus), on the east side of the river near the ferry terminal, and Lymington Town. These are connected to the national rail network by a branch line to Brockenhurst. Services are currently operated by South West Trains, which operated Lymington Branch Line as a heritage railway between 2005 and 2010.[17][18]

The A337 road links Lymington to Lyndhurst and the M27 motorway to the north, and to New Milton and the South East Dorset conurbation to the west.

Ferries have run from Lymington to Yarmouth since the 19th century. Since 1990 they have been operated by Wightlink, successor to the once nationalised company Sealink on this route.[19] The current fleet comprises three car ferries, which entered service in 2009: Wight Light, Wight Sky and Wight Sun. The service runs on average every hour, from a port south-east of the old town on the far side of the Lymington River.

Lymington features in The Children of the New Forest by Captain Marryat, in the historical novels of the local writer Warwick Collins (The Rationalist and The Marriage of Souls), and in The Forest by Edward Rutherfurd.

In Tom Clancy's Patriot Games, a Wightlink ferry heading from the Lymington ferry terminal is intercepted and a prisoner is extracted in heavy seas. Several men on board the ferry are murdered.[citation needed]

The 1980 Christmas special of the ITV children's show Worzel Gummidge was filmed in the town during the summer of that year. During filming a sudden wind blew the titanium dioxide that was being used as a replica of snow into homes, shops and businesses, causing damage and a large compensation bill for the producers, Southern Television.[citation needed]

The 656-page crime novel 'Power Without The Glory,' published in 2007, was set in Lymington and its theme was yachts and smuggling.