Lymphoma is any of a group of blood cell tumors that develop from lymphatic cells. The name often refers to just the cancerous ones rather than all such tumors.[1] Signs and symptoms may include enlarged lymph nodes, fever, drenching sweats, unintended weight loss, itching, and feeling tired.[2][3] The enlarged lymph nodes are usually painless.[2] The sweats are most common at night.[2][3]

Risk factors for Hodgkin lymphoma include infection with Epstein–Barr virus and a history of the disease in the family.[2] Risk factors for common types of non-Hodgkin lymphomas include autoimmune diseases, HIV/AIDS, infection with human T-lymphotropic virus, eating a large amount of meat and fat, immunosuppressant medications, and some pesticides.[3] Diagnosis, if enlarged lymph nodes are present, is usually by lymph node biopsy.[2][3] Blood, urine, and bone marrow testing may also be useful in the diagnosis.[3] Medical imaging may then be done to determine if and where the cancer has spread.[2][3] Lymphoma most often spreads to the lungs, liver, and/or brain.[2][3]

Treatment may involve one or more of the following: chemotherapy, radiation therapy, targeted therapy, and surgery.[2][3] In some non-Hodgkin lymphomas, an increased amount of protein produced by the lymphoma cells causes the blood to become so thick that plasmapheresis is performed to remove the protein.[3] Watchful waiting may be appropriate for certain types.[3] The outcome depends on the subtype with some being curable and treatment prolongs survival in most.[5] The five-year survival rate in the United States for all Hodgkin lymphoma subtypes is 85%,[9] while that for non-Hodgkin lymphomas is 69%.[10] Worldwide, lymphomas developed in 566,000 people in 2012 and caused 305,000 deaths.[6] They make up 3–4% of all cancers, making them as a group the seventh-most common form.[6][11] In children, they are the third-most common cancer.[12] They occur more often in the developed world than the developing world.[6] 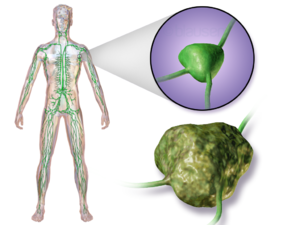 Lymphoma may present with certain nonspecific symptoms; if the symptoms are persistent, an evaluation to determine their cause, including possible lymphoma, should be undertaken.

Lymphoma is definitively diagnosed by a lymph node biopsy, meaning a partial or total excision of a lymph node examined under the microscope.[15] This examination reveals histopathological features that may indicate lymphoma. After lymphoma is diagnosed, a variety of tests may be carried out to look for specific features characteristic of different types of lymphoma. These include: 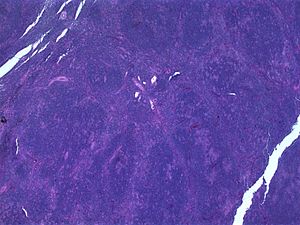 Lymphomas sensu stricto are any neoplasms of the lymphatic tissues (lympho- + -oma) .[16] The main classes are malignant neoplasms (that is, cancers) of the lymphocytes, a type of white blood cell that belongs to both the lymph and the blood and pervades both. Thus, lymphomas and leukemias are both tumors of the hematopoietic and lymphoid tissues, and as lymphoproliferative disorders, lymphomas and lymphoid leukemias are closely related, to the point that some of them are unitary disease entities that can be called by either name (for example, adult T-cell leukemia/lymphoma).

The WHO classification, published in 2001 and updated in 2008,[19][20] is based upon the foundations laid within the "revised European-American lymphoma classification" (REAL). This system groups lymphomas by cell type (i.e. the normal cell type that most resembles the tumor) and defining phenotypic, molecular, or cytogenetic characteristics. The five groups are shown in the table. Hodgkin lymphoma is considered separately within the WHO and preceding classifications, although it is recognized as being a tumor of, albeit markedly abnormal, lymphocytes of mature B cell lineage.

Of the many forms of lymphoma, some are categorized as indolent (e.g. small lymphocytic lymphoma), compatible with a long life even without treatment, whereas other forms are aggressive (e.g. Burkitt's lymphoma), causing rapid deterioration and death. However, most of the aggressive lymphomas respond well to treatment and are curable. The prognosis, therefore, depends on the correct diagnosis and classification of the disease, which is established after examination of a biopsy by a pathologist (usually a hematopathologist).[21] 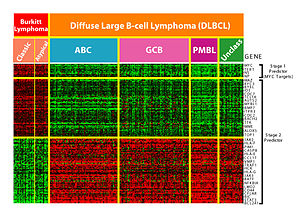 About 40 to 50% of lymphomas in adults
Variable, most resemble B cells of large germinal centers, diffuse growth pattern
Variable expression of CD10 and surface Ig
5-year survival 60%[25]
Occurs in all ages, but most commonly in older adults, may occur outside lymph nodes, aggressive

15% of childhood acute lymphoblastic leukemia and 90% of lymphoblastic lymphoma.[19]:635
Lymphoblasts with irregular nuclear contours, condensed chromatin, small nucleoli and scant cytoplasm without granules
TdT, CD2, CD7
It often presents as a mediastinal mass because of involvement of the thymus. It is highly associated with NOTCH1 mutations, and is most common in adolescent males.

Second-most common form of Hodgkin lymphoma
Many classic Reed-Sternberg cells and inflammation
CD15, CD30
Most common in men, more likely to be diagnosed at advanced stages than the nodular sclerosis form Epstein-Barr virus involved in 70% of cases

The Working formulation of 1982 was a classification of non-Hodgkin lymphoma. It excluded the Hodgkin lymphomas and divided the remaining lymphomas into four grades (low, intermediate, high, and miscellaneous) related to prognosis, with some further subdivisions based on the size and shape of affected cells. This purely histological classification included no information about cell surface markers, or genetics, and it made no distinction between T-cell lymphomas and B-cell lymphomas. It was widely accepted at the time of its publication, but is now obsolete.[28] It is still used by some cancer agencies for compilation of lymphoma statistics and historical rate comparisons.[citation needed]

In 1994, the Revised European-American Lymphoma (REAL) classification applied immunophenotypic and genetic features in identifying distinct clinicopathologic entities among all the lymphomas except Hodgkin lymphoma.[29] For coding purposes, the ICD-O (codes 9590–9999)[30] and ICD-10 (codes C81-C96)[31] are available. 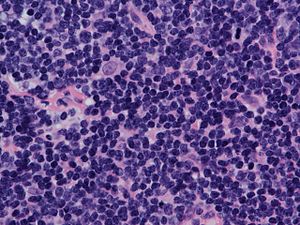 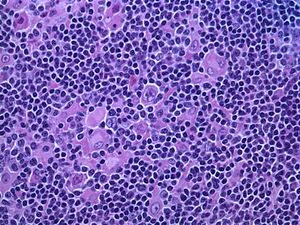 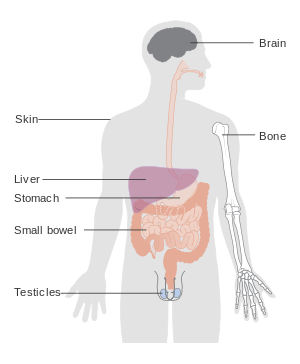 After a diagnosis and before treatment, a cancer is staged. This refers to determining if the cancer has spread, and if so, whether locally or to distant sites. Staging is reported as a grade between I (confined) and IV (spread). Staging is carried out because the stage of a cancer impacts its prognosis and treatment.[citation needed]

Prognoses and treatments are different for HL and between all the different forms of NHL,[33] and also depend on the grade of tumour, referring to how quickly a cancer replicates. Paradoxically, high-grade lymphomas are more readily treated and have better prognoses:[citation needed] Burkitt lymphoma, for example, is a high-grade tumour known to double within days, and is highly responsive to treatment. Lymphomas may be curable if detected in early stages with modern treatment.

Many low-grade lymphomas remain indolent for many years. Treatment of the nonsymptomatic patient is often avoided. In these forms of lymphoma, such as follicular lymphoma, watchful waiting is often the initial course of action. This is carried out because the harms and risks of treatment outweigh the benefits.[34] If a low-grade lymphoma is becoming symptomatic, radiotherapy or chemotherapy are the treatments of choice; although they do not cure the lymphoma, they can alleviate the symptoms, particularly painful lymphadenopathy. Patients with these types of lymphoma can live near-normal lifespans, but the disease is incurable. Some centers advocate the use of single agent rituximab in the treatment of follicular lymphoma rather than the wait and watch approach. Watchful waiting is not a good strategy for all patients, as it leads to significant distress and anxiety in some patients. It has been equated with watch and worry.[35]

Treatment of some other, more aggressive, forms of lymphoma[which?] can result in a cure in the majority of cases, but the prognosis for patients with a poor response to therapy is worse.[36] Treatment for these types of lymphoma typically consists of aggressive chemotherapy, including the CHOP or R-CHOP regimen. A number of people are cured with first-line chemotherapy. Most patients relapse within the first two years, and the relapse risk drops significantly thereafter.[37] For people who relapse, high-dose chemotherapy followed by autologous stem cell transplantation is a proven approach.[38]

Hodgkin lymphoma typically is treated with radiotherapy alone, as long as it is localized.[39]

Advanced Hodgkin disease requires systemic chemotherapy, sometimes combined with radiotherapy.[40] Chemotherapy used includes the ABVD regimen, which is commonly used in the United States. Other regimens used in the management of Hodgkin lymphoma include BEACOPP and Stanford V. Considerable controversy exists regarding the use of ABVD or BEACOPP. Briefly, both regimens are effective, but BEACOPP is associated with more toxicity. Encouragingly, a significant number of people who relapse after ABVD can still be salvaged by stem cell transplant.[41]

Palliative care, a specialized medical care focused on the symptoms, pain, and stress of a serious illness, is recommended by multiple national cancer treatment guidelines as an accompaniment to curative treatments for people suffering from lymphoma.[42][43] It is used to address both the direct symptoms of lymphoma and many unwanted side effects that arise from treatments.[44][45] Palliative care can be especially helpful for children who develop lymphoma, helping both children and their families deal with the physical and emotional symptoms of the disease.[44][46][47][48] For these reasons, palliative care is especially important for patients requiring bone marrow transplants.[49][50] 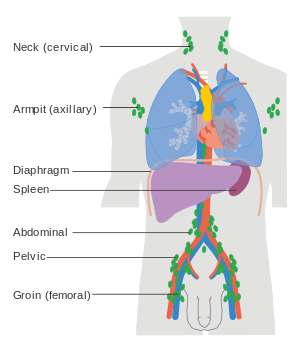 The lymph nodes where lymphoma most commonly develops

Lymphoma is the most common form of hematological malignancy, or "blood cancer", in the developed world.

Taken together, lymphomas represent 5.3% of all cancers (excluding simple basal cell and squamous cell skin cancers) in the United States and 55.6% of all blood cancers.[53]

According to the U.S. National Institutes of Health, lymphomas account for about 5%, and Hodgkin lymphoma in particular accounts for less than 1% of all cases of cancer in the United States.

Because the whole system is part of the body's immune system, patients with a weakened immune system such as from HIV infection or from certain drugs or medication also have a higher incidence of lymphoma.[54]

Thomas Hodgkin published the first description of lymphoma in 1832, specifically of the form named after him.[55] Since then, many other forms of lymphoma have been described.

The two types of lymphoma research are clinical or translational research and basic research. Clinical/translational research focuses on studying the disease in a defined and generally immediately patient-applicable way, such as testing a new drug in patients. Studies may focus on effective means of treatment, better ways of treating the disease, improving the quality of life for patients, or appropriate care in remission or after cures. Hundreds of clinical trials are being planned or conducted at any given time.[56]

Basic science research studies the disease process at a distance, such as seeing whether a suspected carcinogen can cause healthy cells to turn into lymphoma cells in the laboratory or how the DNA changes inside lymphoma cells as the disease progresses. The results from basic research studies are generally less immediately useful to patients with the disease,[57] but can improve scientists' understanding of lymphoma and form the foundation for future, more effective treatments.

An example of basic science research in lymphomas is the study of short non-coding RNAs named microRNAs (miRNAs). They have important functions in lymphoma biology. In malignant B cells, miRNAs participate in pathways fundamental to B cell development, such as B cell receptor (BCR) signalling, B cell migration/adhesion, cell-cell interactions in immune niches, and the production and class-switching of immunoglobulins.[58] MiRNAs influence B cell maturation, generation of pre-, marginal zone, follicular, B1, plasma and memory B cells.[58]