Lyndhurst /lɪndhərst/ is a large village and civil parish situated in the New Forest National Park in Hampshire, England. Serving as the administrative capital of the New Forest, it is a popular tourist attraction, despite local traffic congestion, with many independent shops, art galleries, cafés, museums, pubs and hotels. The nearest city is Southampton, about nine miles (14 km) to the north-east. As of 2001 Lyndhurst had a population of 2,973.[1] The name derives from an Old English name, comprising the words lind (lime tree) and hyrst (wooded hill).

Known as the "Capital of the New Forest",[2] Lyndhurst houses the New Forest District Council. The first mention of Lyndhurst was in the Domesday Book of 1086 under the name 'Linhest'. The Court of Verderers sits in the Queens House in Lyndhurst. The church of St. Michael and All Angels was built in the 1860s, and contains a fresco by Lord Leighton and stained-glass windows by Charles Kempe, William Morris, Edward Burne-Jones and others. It remains a major landmark in the area. Alice Liddell, the inspiration for Alice in Lewis Carroll's Alice's Adventures in Wonderland, is buried here. 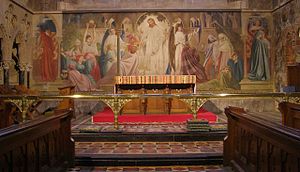 The Leighton Fresco, St Michael and All Angels church

The name "Lyndhurst" is an Old English name, meaning 'Wooded hill growing with lime-trees'. The name comprises the words lind ('lime-tree') and hyrst ('wooded hill').[3][4] The first mention of Lyndhurst was in the Domesday Book of 1086 under the name 'Linhest'.[5] It was part of the royal lands of the New Forest, with the exception of 1 virgate which was held by Herbert the Forester.[5] Herbert may have been the ancestor of the Lyndhurst family, beginning with Herbert Lyndhurst, who held the bailiwick and manor of Lyndhurst in the 12th and 13th centuries.[6]

The manor passed to Henry III in 1270, and together with the wardenship of the New Forest, which invariably accompanied the manor, it formed part of the dowry of four consecutive queens: Eleanor of Castile, Margaret of France, Isabella of France, and Philippa of Hainault.[6] The manor was back in the hands of the king before 1362, and it was granted to various noble families over the course of the following century. Between 1467 and 1581 it was in the hands of the Earls of Arundel, after which it once again reverted to the Crown.[6]

The estate was once again passed to various noble families until 1667, when Charles II granted it to Charles Paulet, 1st Duke of Bolton.[6] He was followed successively by his son and grandson, but by the mid 18th century it was back in royal hands, being held successively by Prince William Henry (up to 1805) and Prince Frederick (until 1827).[6] Subsequently, the manor was deemed "not important to be kept", and the copyholds of the manor, which included estates in Minstead, Burley, Bartley and Poulner, either became enfranchised or passed to the Crown.[6]

A royal park was attached to the manor of Lyndhurst from a very early date.[6] It was unusual for being a King's Park within a King's Forest.[7] In 1299 it covered an area of 500 acres (202 ha), the profits from the honey gathered there amounting to 2 shillings per annum.[6] It was actively worked during the 14th and 15th centuries when payments were made for the fencing and repairing of the palings.[6] The "old Park" of Lyndhurst is where the Parkhill Hotel now stands, the new park being on the A337 Brockenhurst road.[8] 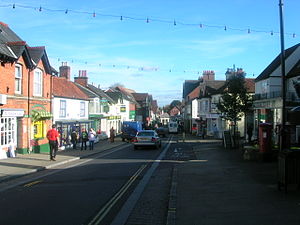 The village is the administrative capital of the New Forest, with the district council based in the village. The Court of Verderers sits in the Queen's House in Lyndhurst. The local headquarters of the Forestry Commission, the body that handles the maintenance of the softwood plantations, forest roads and paths, and controlling the spread of invasive plants, such as rhododendrons and gorse is also based in the Queen's House.

The church of St. Michael and All Angels is a major landmark, built of many different colours of brick, on one of the highest points in the village. Other major landmarks include Bolton's Bench, a picturesque hill to the east of the village;[9] and a row of much photographed thatched cottages on the road to the neighbouring hamlet of Emery Down. Lyndhurst is also home to the New Forest Centre, which includes the New Forest Museum and New Forest Gallery.[10]

Also situated towards the outskirts of the village is Foxlease, one of the training and activity centres of Girlguiding UK, which has been the scene of several internationally important Girl Guiding and Girl Scouting events. It was established in February 1922 following the marriage of president Mary, Princess Royal and Countess of Harewood.[11] The headquarters of the privately owned British chemicals company INEOS is located in the village.[12]

The civil parish includes the hamlets of Bank and Emery Down. Lyndhurst is surrounded by varied "forest", from the heathland of Parkhill to the bog of Matley, and the open forest with its ancient oak and beech to the enclosures of softwoods.[8] 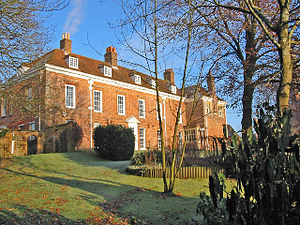 The most important building in Lyndhurst is the Queen's House, which has also in the past been called the King's House, for the name changes according to the gender of the monarch.[13] It is the principal building owned by the Crown in the New Forest, and contains the Verderers' Hall, home of the ancient Verderers' Court.[13] The Queen's House is also the local headquarters of the Forestry Commission.[13]

A manor house probably existed in Lyndhurst by the 13th century.[6] In the reign of Edward I an order was given for "twenty oaks to make laths for the use of the queen's manor-house at Lyndhurst."[6] This house was probably superseded by the hunting lodge built at Lyndhurst in the 14th century, which received frequent royal visits, and for which there are many records relating to the repair and enlargement.[6] In 1388 a hall was built within the lodge, known later as the Verderers' Hall.[6]

Rebuilding took place in the reign of Henry VIII, and especially in the 17th century, during the reigns of Charles I and Charles II,[13] and the current structure largely dates from this time.[14] The last monarch to stay here was George III who visited the New Forest in June 1789.[15] Frances Burney, who was Second Keeper of the Robes to Queen Charlotte, described the house as "a straggling, inconvenient, old house, but delightfully situated, in a village—looking indeed at present like a populous town, from the amazing concourse of people that have crowded into it."[15]

The building today is a rambling two-storey structure in brick.[14] The prisoners' dock, tables and chairs of considerable age are preserved in the hall.[6] Also to be found within is the so-called "Stirrup of Rufus", which was used to measure dogs.[6] 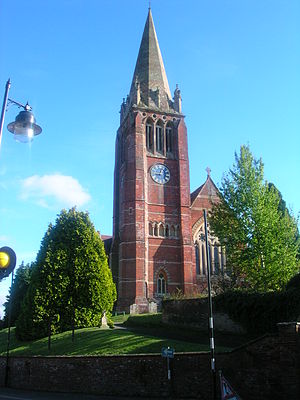 St Michael and all Angels Church

The village's Anglican church, St Michael and All Angels, is on a mound overlooking the village. It was built between 1858–70,[16] and is the third such building on the site.[17] The church was designed by William White.[17] It is constructed with red brick with yellow trim.[16] It has a tall brick-banded spire at the north-west end. The interior has yellow, white and red exposed brickwork, and a nave roof decorated with life-size supporting angels.[16] The church contains a fresco by Frederick Leighton showing the Parable of the Wise and Foolish Virgins, with biblical characters said to be modelled on local people. The church also contains stained glass windows designed by William Morris, Edward Burne-Jones, and Charles Kempe.[17]

Alice Liddell, also known as Alice Hargreaves, the inspiration for Alice in Lewis Carroll's Alice's Adventures in Wonderland, lived in and around Lyndhurst after her marriage to Reginald Hargreaves, and is buried in the graveyard.[17]

There is also a very fine, small Catholic Church of the Assumption and St Edward the Confessor, built by Sir Arthur Blomfield between 1894 and 1896 as a memorial to Marie-Louise Souberbielle.

It has long been mooted that the solution to Lyndhurst's traffic problem is to build a bypass through the surrounding National Park forest land. In 1947 the Government's Baker Report accepted that a bypass might be necessary, and provision was made in the New Forest Act 1949 to construct roads through the forest with the consent of the Verderers.[18] Public inquiries were held in 1975 and 1983. On both occasions the various routes proposed by the county council were opposed by the Verderers as being detrimental to the environment.[18] The Verderers stated that they would not oppose a less harmful route.[18]

Although Lyndhurst itself does not have a railway station, it has for many years been served by the former Lyndhurst Road station, three miles (5 km) away, which has been renamed Ashurst New Forest. It is also only four miles (6 km) from Brockenhurst and under 4 miles from Beaulieu Road station - all these stations are on the South Western Main Line to London and Weymouth, serving Bournemouth and Southampton. Bus services operated by Bluestar run frequently to Southampton and Lymington.[22] There are also two daily National Express coach departures to London Victoria. The New Forest Tour, an open-top bus tour run in the summer, starts and finishes in Lyndhurst.[23]

Lyndhurst is twinned with: