From Infogalactic: the planetary knowledge core
Jump to: navigation, search
Not to be confused with French Lyre or harp-guitar. 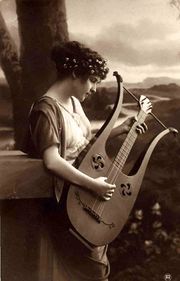 A postcard showing a girl playing a lyre-guitar. The classical theme is typical of the period. 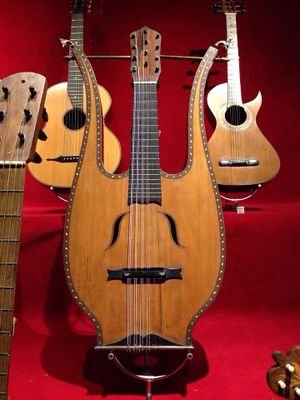 A musical instrument of the chordophone family, the lyre-guitar was a type of guitar shaped like a lyre. Invented in 1780 by Pierre Charles Mareschal,[1] a prominent French luthier, it had six single courses and was tuned like the modern classical guitar, with a fretboard located between two curved arms recalling the shape of the ancient Greek lyre.

The lyre-guitar nearly always had a built-in pedestal allowing it to stand upright when not in use.

A lyre-guitar depicted here in a painting by Francisco de Goya. Its popularity at the time was encouraged by the revival of classicism.

The lyre-guitar enjoyed great popularity as a salon instrument especially in Paris between 1780 and 1820. It became very much in vogue and pervaded the highest levels of society; Marie Antoinette played one[2] and the great guitarists of the day such as Ferdinando Carulli, Fernando Sor, Matteo Carcassi, Mauro Giuliani and Pierre Jean Porro wrote music and methods for it.

Its decline coincided with the waning of the popularity of the guitar as a salon instrument, increasingly supplanted by the piano which benefitted from ongoing improvements to its keyboard action. The lyre-guitar nevertheless persisted, not so much as a musical instrument, but more commonly as a symbol of classicist ideals appearing in numerous allegorical paintings (e.g. Mähler's portrait of Beethoven), and later on, photographs as a prop for evoking ancient Greek and Roman themes.

"The idea was to create an instrument which looked pretty and provided a visual accessory to help ladies of fashion to assume the gracious pose of Greek “kithara” players. This visual likeness became a potent ingredient of the culture of the upper classes.",[3]

Although the lyre-guitar is rarely heard or recorded it is not extinct. A body of nearly forgotten repertoire exists often by highly notable guitarists of the golden age of the guitar. Today lyre-guitars can be made to order by luthiers and authentic examples exist in museums and private collections. 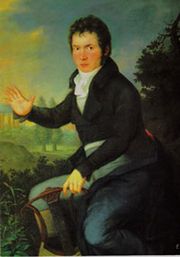 Beethoven is depicted here with a lyre-guitar (Joseph Willibrord Mähler 1804). The lyre-guitar became a popular prop for paintings with a musical or classical theme. The instrument's symbolism in this painting is discussed at Beethoven (Mähler, 1804–05)