Mâcon (French pronunciation: ​[ma.kɔ̃]), historically anglicized as Mascon, is a small city in east-central France. It is the prefecture of the department of Saône-et-Loire, located in Burgundy. Mâcon is home to over 35,000 residents, who are referred to in French as Mâconnais.

The city lies on the western bank of the Saône river, between Bresse in the east and the Beaujolais hills in the south. Mâcon is the southernmost city in the region of Burgundy. It is located 65 kilometres (40 miles) north of Lyon and 400 kilometres (249 miles) from Paris.

The Saône river runs through the town. The climate is temperate with a slight continental tendency.

Mâcon features an oceanic climate (Koppen: Cfb), with hot and humid summers, slightly too cool to be called subtropical (Cfa). Winters are relatively cold to French standards, but milder and more rainy than north of Mâcon. Most precipitation is in spring and autumn.

The agglomeration of Mâcon originates from the establishment of an oppidum and of a river port by the Celts from the Aedui, probably at the beginning of the first century BC. Known then under the name of Matisco, the town developed significantly during the age of the Roman Empire. This is demonstrated by the large Roman hoard, the Mâcon Treasure, that was discovered in the town in 1764, the remains of which is in the British Museum.[4] During the 4th century, the town was fortified.

During the Middle Ages, Mâcon was the administrative center of a county belonging to the Duchy of Burgundy, situated at the extremity of the bridge over the Saône leading to the Bresse territory belonging to the Duchy of Savoy. The town was controlling access to present-day Lamartinien Valley (Val Lamartinien), where the southern end of the Côte de Bourgogne joins the first foothills of the Beaujolais hills, opening the way to the rich plains of the Loire.

On 3 June 1564, Charles IX from Chalon, stopped in the town during his Royal Tour of France (1564–1566), accompanied by the Court and the nobles of his kingdom, including his brother the Duke of Anjou, Henry of Navarre, the cardinals of Bourbon and Lorraine.[5] The town is strategically built: it was a possible entrance into the kingdom for the Swiss or German mercenaries during the French Wars of Religion. He was welcomed by the Queen Jeanne III of Navarre, nicknamed the “Queen of Protestants”, and 1,500 Huguenots.

On 21 October 1790, the matriarch of a prominent local family gave birth to a son who remains highly visible in his hometown, the Romantic poet and historian Alphonse de Lamartine.[6]

In 1790, the Revolutionary government designated Mâcon as the capital (chef-lieu) of Saône-et-Loire, a newly created département within the radical restructuring of national administration.

In 1814, the town was invaded by Austrian troops and then liberated twice by French troops before being permanently occupied until the fall of the Empire. After Napoléon’s return and the subsequent Hundred Days, Mâcon and the Mâconnais were again captured by the Austrians.

During World War II, Mâcon was the first town in the unoccupied zone libre between Paris and Lyon. The town was liberated on 4 September by the troops who had landed in Provence.[7]

Photograph of the city of Mâcon taken from Saint-Laurent-sur-Saône (Ain), on the other side of the Saône river 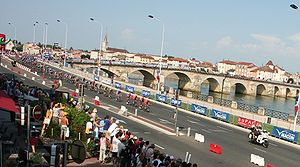 In 2007, the city was awarded the Grand Prix prize and “4 flowers” in the Entente Florale competition.[8]

Mâcon is connected to neighbouring major cities through various routes:

On the evening of 30 June 2009, the Mâcon Bus services ceased operation. This was due to the public service delegation contract between the SITUM and the Mâcon Bus company (a subsidiary of Transdev), operating the network since 1987, not being renewed at the last call for bids. So since 1 July 2009, the company CarPostal Mâcon (CarPostal France's subsidiary) has been providing city transport services on the network renamed Tréma.

The network Tréma, restructured on 31 August 2009, made the following bid:

Mâcon is run by the network Buscephale of Saône-et-Loire’s local council.

Mâcon is a member of CAMVAL (agglomeration community of the Mâconnais – Val de Saône districts). It is also where the CAMVAL headquarters is located.

Mâcon has five collèges and four lycées. These establishments are located in the same area in the west of the city, with the exception of the collèges Schuman (north) and Saint-Exupery (south).

Mâcon is one of the department’s major employment areas which is by far the most dynamic (13.5% increase between 1999 and 2006) compared to cities such as Chalon-sur-Saône or Montceau-les-Mines which are losing jobs. This dynamism is particularly helped by the many transportation links available and its proximity to Lyon. 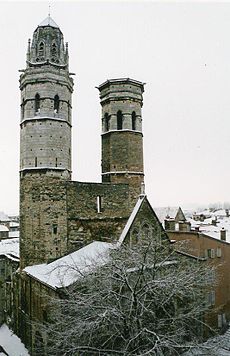 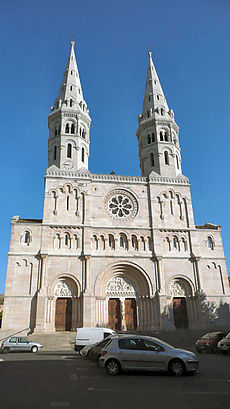 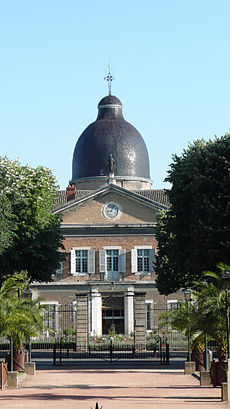 The Hôtel-Dieu built in the 18th century by Melchior Munet, a student of Soufflot.

Mâcon’s town center of extends from Place Gardon, in the north, to the Roundabout of Europe in the south, from Place de la Barre, in the west, to the banks along the Saône in the east of the city. The center is the town’s shopping area. Most shops are located near the Town Hall (rue Carnot, rue Dufour, rue Sigorgne, rue Philibert-Laguiche, rue Dombert, rue Franche, the quay Lamartine, the esplanade Lamartine and rue de la Barre). It is also the historical center of the town. Most monuments are located in that area (Cathedral of Saint-Vincent, Church Saint Pierre...), as are the town’s two museums. The town centre consists of several districts which are all rather different from each other. With its Place aux Herbes, the Saint-Antoine district is the historic heart of Mâcon, despite its relative distance from the Town Hall. This district covers the northern part of the town centre; it is crossed by the rue de Strasbourg and consists of narrow lanes. There is the prefecture of Saône-et-Loire and the old Saint-Vincent Cathedral commonly called the Old Saint-Vincent. Further west lies the Square de la Paix, bordered by the Hôtel-Dieu, the Palais de Justice, Saint-Vincent Cathedral, plus the Vallon des Rigollettes and the Héritan district.

From the late 1990s to the early 2000s, the esplanade Lamartine underwent extensive redevelopment and upgrades. The winding car park and damaged cobblestones were replaced by an underground car park on three levels, a larger and brighter esplanade, bars, and a stage on the water (of the Saône river) which now accommodates all kinds of events, concerts and shows. The Statue Lamartine, which sits proudly on the esplanade, was completely renovated. Small gardens now brighten up the immense space that Mâcon’s Esplanade Lamartine occupies. All along, one can find an extract from the famous poem by Lamartine, “Le Lac”: "Time, halt in your flight... " engraved in the ground in silver letters.

The north of Mâcon is split, with the Neusdadt roundabout marking the boundary between the two sections. Flacé-lès-Mâcon, a village built in the city, constitutes the north-west of Mâcon. . In addition to the adjoining Town Hall, church and small downtown area, Flacé consists entirely of residential areas.
The north-east of Mâcon is composed of various residential areas and the town’s sport centres (Physical Activity Training Course (P.A.P.A), public swimming pool, Centre for Sports Education, rowing, sailing and water skiing clubs, several football fields and clubs, and the Sports Palace). ). The residential areas consist mainly of low-rent council estates (HLM) with districts such as the priority development areas (ZUP) of Mâcon or the boulevard des États-Unis (road belonging administratively to the Saugeraies district).

The south of Mâcon is composed of three major areas.

The west of Mâcon is the least populated part of the town. This is where Mâcon’s lycées (René Cassin, Lamartine, Alexandre Dumaine and Ozanam) and most of the colleges are located, along with some residential areas merged with those of Charnay-lès-Mâcon, the Hospital of Mâcon and the historic working class area of Mâcon,Bioux.

Formerly an independent commune, Flacé-lès-Mâcon was re-attached to Mâcon in 1965. It is now a residential area with a very prominent village atmosphere.

Loché is an associated commune of Mâcon. The fusion-association dates from 1972. Mâcon Loché-TGV station is located in this wine- producing village.

Saint-Jean-le-Priche is an associated commune of Mâcon. The merging association dates from 1972.

Sennecé-lès-Mâcon is an associated commune of Mâcon. The merging association dates from 1972.

On Sunday 28 June 2009, three buildings in the Marbé district were destroyed by implosion.[10]

The area west and north of Mâcon produces well-known wines from the Chardonnay grape. The best known appellation of the Mâconnais is Pouilly-Fuissé.

In South Burgundy, you can see :

Every year in July, the Crescent Jazz Club holds a jazz festival during three days (as part of the "Eté frappé" Festival) featuring international jazz musicians.

Mâcon has 73 clubs with 55 organisations, 40 different sports to play, and 14,506 members of a sports association (42% of the population). It was elected the most sportive town in France in 2001.

Mâcon is twinned with: