From Infogalactic: the planetary knowledge core
Jump to: navigation, search
For other uses, see Merida.

Mérida (Spanish pronunciation: [ˈmeɾiða]) is the capital of the autonomous community of Extremadura, western central Spain. The population was 58,164 in 2012. The Archaeological Ensemble of Mérida has been a UNESCO World Heritage site since 1993. 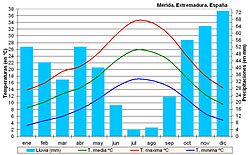 Mérida has a Mediterranean climate with Atlantic influences, due to the proximity of the Portuguese coast. The winters are mild, with minimum temperature rarely below 0 °C (32 °F), and summers are hot with maximum temperatures occasionally exceeding 40 °C (104 °F).

Precipitation is normally between 450 to 500 mm (17.7 to 19.7 in) annually. The months with most rainfall are November and December. Summers are dry, and in Mérida, as in the rest of southern Spain, cycles of drought are common, ranging in duration from 2 to 5 years.

In autumn the climate is more changeable than in the rest of the year. Storms occur with some frequency, but the weather is often dry.

Both humidity and winds are low. However, there is frequent fog, especially in the central months of autumn and winter.

Mérida has been populated since prehistoric times as demonstrated by a prestigious hoard of gold jewellery that was excavated from a girl's grave in 1870. Consisting of two penannular bracelets, an armlet and a chain of six spiral wire rings, it is now preserved at the British Museum.[1] The town was founded in 25 BC, with the name of Emerita Augusta (meaning the veterans – discharged soldiers – of the army of Augustus, who founded the city; the name Mérida is an evolution of this) by order of Emperor Augustus, to protect a pass and a bridge over the Guadiana river. The city became the capital of Lusitania province, and one of the most important cities in the Roman empire. Mérida preserves more important ancient Roman monuments than any other city in Spain, including a triumphal arch of the age of Trajan.

After the fall of the Western Roman Empire, during the Visigothic period, the city maintained much of its splendor, especially under the 6th-century domination of the bishops, when it was the capital of Hispania. In 713 it was conquered by the Muslim army under Musa bin Nusair, and became the capital of the cora of Mérida; the Arabs re-used most of the old Roman buildings and expanded some, such as the Alcazaba. During the fitna of al-Andalus, Merida fell in the newly established Taifa of Badajoz.

The city was brought under Christian rule in 1230, when it was conquered by Alfonso IX of León, and subsequently became the seat of the priory of San Marcos de León of the Order of Santiago. A period of recovery started for Mérida after the unification of the crowns of Aragon and Castile (15th century), thanks to the support of Alonso de Cárdenas, Grand Master of the Order. In 1720 the city became the capital of the Intendencia of Mérida.

In the 19th century, in the course of the Napoleonic invasion, numerous monuments of Mérida and of Extremadura were destroyed or damaged. Later the city became a railway hub and underwent massive industrialization.

Among the remaining Roman monuments are: 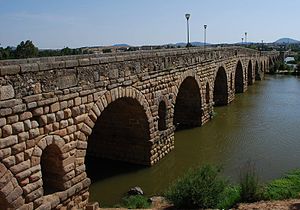 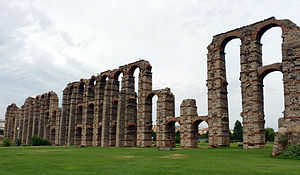 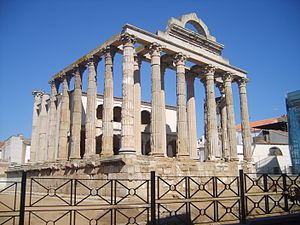 Mérida AD is the principal football team of the city, founded in 2013 as a successor to Mérida UD, which itself was a successor to CP Mérida. The first of these teams played two seasons in Spain's top division, La Liga, in the late 1990s.

All three clubs played at the city's 14,600-capacity Estadio Romano. On 9 September 2009, it hosted the Spanish national team as they defeated Estonia 3-0 to qualify for the 2010 FIFA World Cup, which they went on to win. Mayor of Mérida Ángel Calle said “We want to use the Estonia match to promote Mérida and Extremadura, we will welcome the players as if they were 21st-century gladiators.”[3]

Mérida is twinned with: