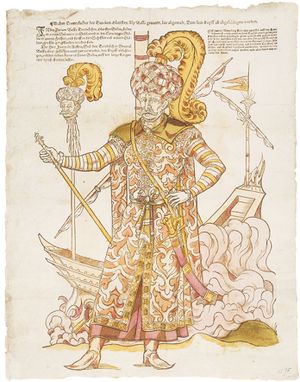 A print from a 1571 anonymous German broadsheet after the Battle of Lepanto of the same year, where Ali Pasha was wounded and killed in action by being shot in the head and beheaded. The print shows his "true likeness" in the foreground, while his head is displayed on a pike on an Ottoman battleship in the background.

Müezzinzade Ali Pasha (Turkish: Müezzinzade Ali Paşa; also known as Sofu Ali Pasha or Sufi Ali Pasha or Meyzinoğlu Ali Pasha; died 7 October 1571) was an Ottoman statesman and naval officer. He was Kapudan Pasha (Grand Admiral) in command of the Turkish fleet at the naval Battle of Lepanto, where he was killed in action. He also served as the governor of Egypt from 1563 to 1566.

He was the son of a muezzin, hence his epithet Müezzinzade ("son of a muezzin"). He was a favorite of Sultan Selim II and of the women of the seraglio who admired his voice as a muezzin, and he married one of Selim II's daughters.[citation needed]

From 1563 to 1566, Ali Pasha served as the Ottoman governor of Egypt.[1] He was reportedly a very ascetic Sufi man, wearing only "coarse woolen clothes" and paying many visits to the tombs of saints in the City of the Dead necropolis in Cairo.[2][3]

Ali Pasha, with a fleet eventually numbering 188 galleys, fustas, transports and other ships, carried the main land force, commanded by Lala Mustafa Pasha, for the Ottoman invasion and conquest of Cyprus from Constantinople on 16 May 1570 to Cyprus, where they landed on 3 July. While Lala Mustafa commanded the eventual capture of the island from Venice, Ali Pasha took the bulk of his fleet to Crete and then to Morea, thereby effectively preventing any Christian relief fleet from coming to the aid of the besieged defenders of Cyprus.

Battle of Lepanto and death

Ali Pasha was commander-in-chief of the Ottoman naval forces at the Battle of Lepanto on 7 October 1571. Selim had entrusted him with one of the most precious possessions of the Ottoman Sultans, the great "Banner of the Caliphs", a huge green banner heavily embroidered with texts from the Qur'an and with the name of Allah emblazoned upon it 28,900 times in golden letters. It was intended to provide an incentive for him and his men to do their best in battle.

Still quite young, like his counterpart Don Juan, he was more of a land soldier than a naval tactician, and his failure to keep his lines together and keep his individual squadrons from charging like cavalry units in a land battle allowed the Christian forces to penetrate his battle line in various places and to surround and defeat the isolated ships. He was also somewhat of a firebrand and almost immediately sought the direct confrontation with his opposite number. His flagship, the galley Sultana, battled head-to-head with Don Juan's flagship La Real, was boarded and, after about one hour of bloody fighting, with reinforcements being provided to both sides by other galleys in their respective fleets, was captured. In the ensuing battle, Ali Pasha was slain and his head was then displayed upon a pike. This, and the capture of the Banner of the Caliphs by La Real, led to a collapse in Turkish morale, greatly contributing to their rout in the battle.