From Infogalactic: the planetary knowledge core
Jump to: navigation, search
This article is about the motorway in Great Britain. For the motorway in Russia, see M27 highway (Russia). 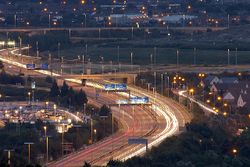 Looking down onto the M27 from Portsdown Hill 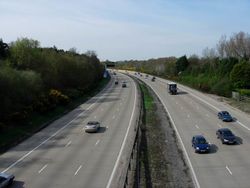 The M27 is a motorway in Hampshire, England. It is 25 miles (40 km) long and runs west-east from Cadnam to Portsmouth. It was opened in stages between 1975 and 1983. It is unfinished, as an extension to the east was planned.[1] A number of smaller motorways were proposed, connecting the city centres of Southampton and Portsmouth to the motorway;[2] of these only the M271 and M275 were built. Two sections of the M27 have since been widened to four lanes each way, the first between Junctions 7 and 8, and the second between Junctions 3 and 4.

Running approximately parallel both to the coast of the Solent and to the A27, the M27 starts as an eastwards continuation of the A31 from Bournemouth and Poole, meets the A36 from Salisbury, crosses the Wessex Main Line railway, and then meets the M271 to central Southampton. After the M271, the road becomes a dual four lane motorway and passes Rownhams services, it then meets the M3, (two lanes going off, two lanes continuing to the other side of the junction) reverting to a dual three lane motorway as it passes to the north of Southampton, passes Southampton Airport, meeting Junction 7 and becoming dual four lanes again, then becoming dual three lanes after Junction 8, it then runs alongside the West Coastway Line as it heads south-east towards Fareham. It then runs alongside the northern outskirts of Fareham, briefly with a fourth climbing lane in either direction, before its junction with the M275 to Portsmouth. Very shortly after this point the motorway ends, becoming the A27, a four lane dual carriageway almost to motorway standards until the junction with the A3 (M) Motorway. The official reason for this section of road not being a continuation of the motorway is the hard shoulders being too narrow. Although the M275 which the M27 junctions with, has no official hard shoulders throughout its entire length.

It has been said that the M27 was intended as a motorway connecting south coast towns from Penzance to Ramsgate.[5] However the only proposal of a route similar to that was by the Institution of Highway Engineers in 1936.[1][6][7] Road developments in the New Forest are also restricted due to its National Park status.

The M27 was meant to be extended to Chichester; a sign of this is the width of the A27 road between Junction 12 and the junction with the A3(M), which has 3/4 lanes, a hard shoulder and grade-separated junctions. It is not part of the M27 as its hard shoulders are not quite wide enough to comply with motorway regulations.[1][8]

The M272 was meant to go from Junction 5 through Portswood to the centre of Southampton. The M272 was instead built (in much reduced form) as the A335 Thomas Lewis Way.

Junction 6 was never built – there were plans for a motorway spur (probably to be numbered M273) connecting the M27 to the centre of the Townhill Park area of Southampton.[2]

Data from driver location signs are used to provide distance and carriageway identifier information.[10] Where a junction spans several hundred metres and start and end points are available, both are cited.