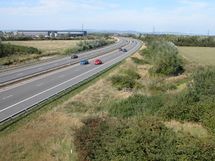 Looking north at Dyer's Common with the Second Severn Crossing in the background.

The M49 motorway is a 5-mile (8 km) motorway west of Bristol, England, that forms a link between the M5 motorway at Junction 18, and the Second Severn Crossing, on the M4 motorway at Junction 22. It was constructed in 1996,[1] at the same time as the bridge and is unique as it is only accessible from other motorways. Original plans provided for an intermediate junction with the A403, to serve an expanded industrial area and Severn Beach, but neither have come to fruition.[2] The M49 is anomalously numbered, as it is entirely to the south of the M4 and should therefore begin with a 3.[3]

It begins at junction 18A of the M5 and then heads roughly north and north west before it reaches its terminal junction with the M4 at junction 22, just before the Second Severn Crossing. It cuts journey times for traffic to and from Avonmouth docks, Central and southern Bristol and South West England. Having a two-way grade separated roundabout junction with the M4, it also fulfils the dual role of providing a bypass for the busy stretch of the M5 between the Avonmouth Bridge and the M4 in case of that route being shut.

Information above gathered from Advanced Direction Signs May 2011