The M4 corridor is an area in the United Kingdom adjacent to the M4 motorway, which runs from London to South Wales.[1] It is a major high-technology hub.[2][3] Important cities and towns linked by the M4 include (from east to west) London, Slough, Bracknell, Maidenhead, Reading, Newbury, Swindon, Bath, Bristol, Newport, Cardiff, and Swansea. The area is also served by the Great Western Main Line, including the South Wales Main Line, and London Heathrow Airport.[4] Technology companies with major operations located in the area include: Amazon, Citrix Systems, Datto, Dell, Brightpearl, Alcatel-Lucent, Huawei, Lexmark, LG, Microsoft, Novell, Nvidia, O2, Panasonic, SAP, Symantec.

The eastern end of the English M4 corridor is home to a large number of technology companies, particularly in Berkshire, Swindon and the Thames Valley.[5] For this reason this part of the M4 Corridor is sometimes described as England's "Silicon Valley".[1] Slough, Windsor, Maidenhead, Reading, Bracknell and Newbury are the main towns in the Berkshire stretch of the M4.

Investment has gradually spread westwards since the 1980s.[16] In the west the interchange of the M4 motorway and M5 motorway at the Almondsbury Interchange near Bristol had seen considerable growth of industries by the mid 1990s,[17] in adjoining areas. 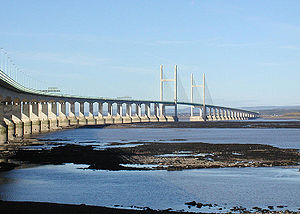 The major Welsh towns and cities along the M4 corridor are Bridgend, Cardiff, Llanelli, Neath, Newport, Port Talbot and Swansea. South Wales is an industrial heartland of the UK.[18] The 1980s and 1990s saw the development of the Swansea Enterprise Park.[19] The Celtic Manor Resort located adjacent to the M4 in Newport has undergone significant investment[20] and successfully hosted the 2010 Ryder Cup.[21] Newport has seen significant growth in the electronics industry since the late 1980s[22] and is home to factories for electronics firms such as Alcatel.[23] The 1990s also saw significant investment in Cardiff such as in Cardiff Gate and the Cardiff Bay area.[24] One site of note on the M4 Corridor is Port Talbot Steelworks - the largest steel producer in the UK and one of the biggest steel producers in Europe.[25]

The opening of the Second Severn Crossing in 1996 resulted in the previous M4 and bridge, serving Chepstow, being renumbered the M48, although the area is still generally considered as falling within the M4 corridor.[26][27]

Since the start of the 21st Century there has been evidence of more investment west of Cardiff, such as: