From Infogalactic: the planetary knowledge core
Jump to: navigation, search
This article is about the M5 motorway in England. For other uses, see M5 motorway (disambiguation).

The M5 is a motorway in England. It runs from Junction 8 of the M6 at West Bromwich near Birmingham to Exeter in Devon. Heading south-west, the M5 runs east of West Bromwich and west of Birmingham through Sandwell Valley. It continues past Bromsgrove (and from Birmingham and Bromsgrove is part of the Birmingham Outer Ring Road), Droitwich Spa, Worcester, Tewkesbury, Cheltenham, Gloucester, Bristol, Weston-super-Mare, Bridgwater and Taunton on its way to Exeter, ending at Junction 31. It is the primary gateway to South West England. Congestion is common during the summer holidays, on Friday afternoons, and school and bank holidays on the section south of the M4. 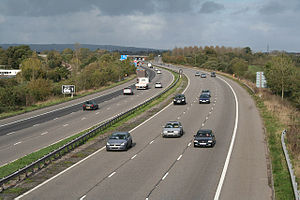 The M5 near Junction 28, Devon

The M5 follows the route of the A38 road quite closely. The two deviate slightly around Bristol and the area south of Bristol from Junctions 16 to the Sedgemoor services north of Junction 22. The A38 goes straight through the centre of Bristol and passes by Bristol Airport, while the M5 skirts both, with access to the airport from Junctions 18, 19 or 22. The A38 continues south into Devon from the motorway's terminus at Junction 31, near Exminster. Between Junction 21, Weston-super-Mare and Junction 22, Burnham-on-Sea, the M5 passes by an isolated landmark hill called Brent Knoll. The Willow Man sculpture is visible from both carriageways, and acts as a landmark just to the south of Junction 23.

Junction 15 of the M5 is a large four level stack interchange, called the Almondsbury Interchange, where the M5 meets the busy M4. The Avonmouth Bridge, between Junctions 18 and 19, is often a bottleneck during heavy traffic periods, due mainly to lane drops at either ends of the bridge for the respective junctions, and the sharp angle in the centre of the bridge, which causes larger vehicles to slow considerably.[1] There are split-level carriageways where the M5 ascends the hill sides above the Gordano Valley, between Portishead, Junction 19 and Clevedon, Junction 20. Junction 1 surrounds a surviving gatehouse from the former Sandwell Hall.

The first 26 miles (42 km) of the M5 motorway to be built were constructed as a dual two-lane motorway (two lanes in each direction), with Worcestershire County Council acting as engineer.[2] This section, from Junction 4 (Lydiate Ash) in the north to a trumpet junction with the M50 in the south, opened in July 1962.[2][3] The southern end was called a trumpet junction because of its shape: a 270 degree curved bend. There were no other exits from this trumpet junction though room was left for an extension to the south.

Worcestershire County Council, the Police and particularly the County Surveyor of Worcestershire made repeated representations that a dual 3-lane standard motorway was appropriate, however the Ministry of Transport insisted that a dual 2-lane motorway would be built at a cost or around $8 million. When the decision became necessary to widen the Worcestershire section of M5 it cost of £123 million.[4]

The 2 miles (3.2 km) dual two-lane section between Junctions 16 and 17 built at Filton, near Bristol, was also opened in 1962, and was intended to replace the pre-war Filton bypass.[2][3][5] Gloucestershire County Council acted as engineer for this section, which was widened to a dual three-lane motorway in 1969.[3]

North of Junction 4 the M5 was constructed in sections, from 1967 to 1970, together with the Frankley services. Much of the northern section beyond Junction 3, from about Quinton to the junction with the M6 motorway, was constructed as an elevated dual 3-lane motorway using concrete pillars.[3]

The M5 was also extended southwards, in sections, from 1967 to 1977, through Somerset, to Exeter in Devon as a dual three-lane motorway,[3] together with the Strensham services.

The short section between Junctions 27 and 29 was built between 1967 and 1969, by Devon County Council, as the A38 Cullompton Bypass, with the intention that it should become part of the M5.[2] The termini for this section have since been removed, although part of the southern terminal roundabout is now used as an emergency access.[6] The section was developed to motorway standards, and incorporated into the M5 in 1975.[2]

The section from Junctions 16 and 18 was illuminated in about 1973 as part or a wider policy announced by UK Minister for Transport Industries in 1972 to illuminate the 86 miles (138 km) of UK motorway particularly prone to fog.[7]

In the late 1980s Junction 4a was built as part of the M42 motorway construction project. The route of the M42 was decided as early as 1972 but, owing to planning delays, the short section of the M42 north of Bromsgrove did not open until 1989.[8]

The first-built section of the M5, from Junctions 4 to 8, was widened to provide six lanes (three lanes in each direction) in the early 1990s. During this work the northbound Strensham services was rebuilt further away from the new junction. Junctions 7 and 8 were also remodelled into a roundabout junction.[9]

The Avonmouth Bridge was converted to eight lanes (four lanes in each direction) in the early 2000s. Later, in 2005–2006, parts of the M5 between Junctions 17 and 20 were widened to 7 lanes (four lanes climbing the hills and three lanes descending the hills); variable message signs were added and parts of the central reservation was converted to a concrete step barrier. During this stage of construction the M5 became Britain's longest contraflow system,[10][11] spanning 9 miles (14 km) between Junctions 19 and 20. The M5 contraflow was said to be the most complicated ever built in the UK as the motorway is on a split level around the steep hills of the Gordano Valley; meaning four lanes plus an additional emergency vehicle lane were squeezed into that section.[12] 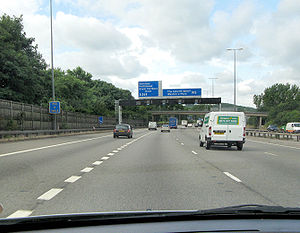 The M5 motorway south of the Avonmouth Bridge, near Bristol.

In 2002 extended exits for Junction 12 were constructed. The Highways Agency did not anticipate the traffic flows through the junction and the resultant queues can now extend back onto the motorway.[13] This is because of an increase in traffic from Stroud intending to use the M5 northbound. The distance from Junctions 12 and 13 is similar and traffic congestion is heavy on the A419 towards Junction 13 whereas it is usually lighter on the B4008 towards Junction 12. As traffic leaving the M5 northbound towards Gloucester needs to give way to this traffic coming from the B4008, the queue on the motorway can extend beyond the first sign for the junction. More improvements are scheduled, as at 2010.

At Junction 28 the Cullompton services are signed on the motorway in the northbound direction only. This was implemented to reduce congestion at the low capacity junction, although there is still access available to the services southbound through the junction. Also, the northbound exit slip to the junction was reduced to one lane instead of two to reduce traffic on the small roundabout at the west side of the junction.

In 2009 it was announced that the lighting between junctions 30 and 31 had been turned off between midnight and 5.00am to save energy.[14]

Proposals were announced in September 2009 for a new Gloucester Services between junctions 11a and 12.[15] A planning application was submitted in December 2009. Stroud District councillors approved the services in August 2010.[16] The Services opened in May 2014[17]

There have existed movements to petition the Government for an extension of the M5 south, to the city of Plymouth, which currently relies on the A38 road. The argument for such an extension has intensified in light of the closure of Plymouth City Airport in 2011, and the 2014 breaching of the South Devon Railway sea wall following storms that in turn, cut off Plymouth and Cornwall's rail access.

On the evening of Friday 4 November 2011, seven people were killed and a further 51 injured in a major crash involving over 50 vehicles which included cars, vans and large goods vehicles near Junction 25 in West Monkton, near Taunton.[18] Several vehicles were burnt out in the fire which developed at the scene as the result of a series of explosions, and the road surface was seriously damaged, not just by the fire and explosions, but also by fuel spillage.[19] The cause of the crash, which took place in wet foggy conditions close to a firework display, was investigated. One person was charged for breach under health and safety laws and found not guilty.[20]

In October 2009, workmen clearing the bottom of the M5 at Junction 14 discovered a human skeleton in a black bin bag dumped in the bushes at the side of the motorway. The police were called soon after, and it was soon established that the bones were those of a young female. A few days later, DNA found on the remains confirmed that the body was that of Melanie Hall, who disappeared in June 1996 after a night out in Bath, Somerset, and who had never been found. Dental records confirmed that the body was hers, and the police began a formal investigation into her murder.[21]

Data from driver location signs are used to provide distance and carriageway identifier information.[22][23][24] Where both the start and end point of the junction are known, both have been included.