MARPAT (short for Marine pattern) is a digital camouflage pattern in use with the United States Marine Corps, introduced with the Marine Corps Combat Utility Uniform (MCCUU), which replaced the Camouflage Utility Uniform. Its design and concept are based on the Canadian CADPAT pattern. The pattern is formed of small rectangular pixels of color. In theory, it is a far more effective camouflage than standard uniform patterns because it mimics the dappled textures and rough boundaries found in natural settings. It is also known as the "digital pattern" or "digi-cammies" because of its micropattern (pixels) rather than the old macropattern (big blobs).

The United States government has patented MARPAT, including specifics of its manufacture.[1] By regulation, the pattern and items incorporating it, such as the MCCUU and ILBE backpack, are to be supplied by authorized manufacturers only and are not for general commercial sale, although imitations are available such as "Digital Woodland Camo" or "Digital Desert Camo".

MARPAT was also chosen because it distinctively identifies its wearers as Marines to their adversaries, while simultaneously helping its wearers remain concealed. This was demonstrated by a Marine spokesman at the launch of MARPAT, who stated: "We want to be instantly recognized as a force to be reckoned with. We want them to see us coming a mile away in our new uniforms."[2] As such, the US Marine Corps restricts use of the camouflage, preventing its use in most other divisions of the United States military. 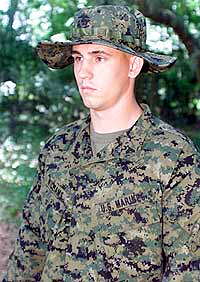 A U.S. Marine showcasing the MCCUU in woodland MARPAT in 2001. 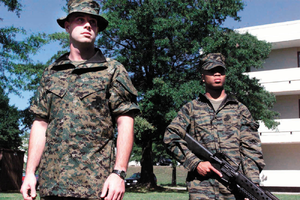 Two U.S. Marines test out early predecessors to the MCCUU in 2001. The two prototypes feature removable sleeves, a feature that was later abandoned on the finished production version. The uniform on the left features an early version of woodland MARPAT. 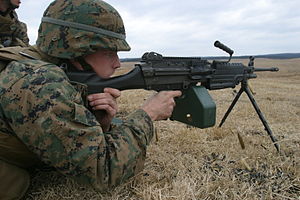 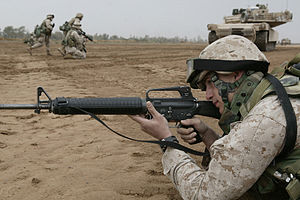 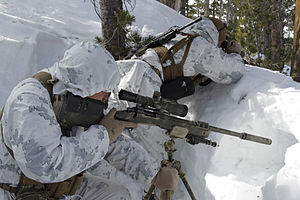 The concept of using miniature swatches of color as opposed to large splotches is not new. In World War II, German troops used various patterns similar to the current German Flecktarn, which involved similar small dabs of color on a uniform to provide camouflage.

The Canadian Forces originally developed the pattern, called CADPAT, and provided samples to the United States.[citation needed] The USMC design team in charge of this process went through over 150 different camo patterns before selecting three samples that met their initial objectives. These were two versions of tigerstripe and an older design of Rhodesian Brushstroke. The influence of tigerstripe can still be seen in the final MARPAT. These three samples were then reconstructed using new shapes and unique color blends that would allow a more effective uniform in a great range of environments.

The new patterns were then field tested in different environments, day and night, with night vision and various optics. MARPAT did exceptionally well in their wet uniform test when viewed with night vision while illuminated with IR, where normally patterns appear as a solid. The MARPAT patent lists U.S. Army research into fractal pattern camouflage as the basis for MARPAT.

The MARPAT pattern was chosen in a run-off against seven other patterns at the USMC Scout Sniper Instructor School.[3]

Different ratios and variations of colors were tested before final candidate patterns were actually printed to textile for field trials. A modified version of Vietnam tiger stripe also made it to final trials but was eliminated due to MARPAT being superior in all environments. The purpose of the digitized pattern is to create visual "noise" and prevent the eye from identifying any visual templates. Thus, the pattern is intended to not register as any particular shape or pattern that could be distinguished. When compared to a white background the MARPAT does look surprising and would seem to catch attention, but when used in an operative environment, its textured appearance and lack of hard edges make it more effective than traditional patterns.

There were initially three MARPAT patterns tested: Woodland, Desert, and Urban. Only the Woodland and Desert patterns were adopted by the Marine Corps, replacing the U.S. Woodland pattern and the U.S. Three Color Desert pattern. Webbing and equipment worn with MARPAT Woodland and MARPAT Desert is produced in Coyote Brown, a mid-tone color common to both the woodland and desert patterns. Although a digital snow pattern has also been adopted on cold weather training over-garments, this uses a different pattern from the Canadian company Hyperstealth.[11]

Authentic MARPAT material is distinguishable by an Eagle, Globe, and Anchor emblem incorporated into the pattern, in both the Woodland and Desert patterns.[12] 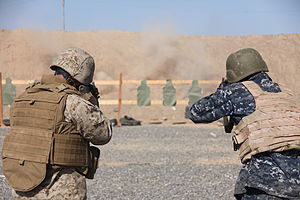 MARPAT is similar to Canadian Forces CADPAT, which was first developed in the 1990s.[13]

The United States Army has used the same shapes into its digital Universal Camouflage Pattern Army Combat Uniform. ACU's pattern differs in that it uses a much paler three-color scheme of sage green, grey and sand.

The United States Air Force has designed its own Airman Battle Uniform (ABU) using a standard tiger stripe pattern and slight variation on the color scheme of ACU.

The United States Navy announced approval for a digital "BDU-style" work uniform in late 2008. The Navy Working Uniform (NWU) was chosen by surveyed sailors for consistency and longer life, while the blue-grey-black Type I pattern was designed for aesthetic purposes rather than camouflage to disguise them at sea. In January 2010, the Navy began considering new Navy Working Uniform patterns modified from MARPAT, named Type II and Type III, desert and woodland respectively. The Woodland pattern was actually an earlier coloration of the MARPAT scheme, not adopted following USMC trials.[14] These patterns are overall darker than their respective MARPAT progenitors, modified with different color shades,[15] and addressed the fact that the blue and grey Type I pattern was not meant for a tactical environment (the Battle Dress Uniform in M81 woodland and Desert Camouflage Uniform are still used for this purpose).[16] Backlash from Marines, including an objection from former Commandant Conway, led to restrictions when NAVADMIN 374/09 was released:[17] Type II pattern to Naval Special Warfare personnel, while Type III is restricted to Navy ground units.[18]