The MD Helicopters MD Explorer is a light twin utility helicopter. Designed in the early 1990s by McDonnell Douglas Helicopter Systems, it is currently produced by MD Helicopters, Inc. There have been two models, the original MD 900, and its successor, the MD 902.

In January 1989, McDonnell Douglas Helicopters officially launched the development of the Explorer, initially referred to as MDX. The Explorer was the first McDonnell Douglas helicopter to incorporate the NOTAR system from its initial design.[1] McDonnell Douglas partnered with Hawker de Havilland of Australia to manufacture the airframes. 10 prototypes were built with seven being used for ground tests. McDonnell Douglas Helicopters became a launch customer for Pratt & Whitney Canada's PW200 series of engines, with an exclusive agreement to power the first 128 Explorers with two PW206As.[2] Meanwhile, plans to offer the Turbomeca Arrius as an option were dropped.[1] The first flight of the Explorer took place on 18 December 1992, with ship #2 (N900MD). FAA certification for the Explorer was granted on 2 December 1994, with JAA certification following shortly after.

In September 2000, the Explorer has been delivered with the further improved PW207E turboshaft, with improved hot and high and one engine inoperative performance.[1]

The MD Explorer features the NOTAR anti-torque system, with benefits including increased safety, far lower noise levels and performance and controllability enhancements.[1] Instead of an anti-torque tail rotor, a fan exhaust is directed out of slots in the tail boom, using the Coandă effect for yaw control. Boeing retains the design rights to the NOTAR technology despite selling the former McDonnell Douglas civil helicopter line to MD Helicopters in early 1999. The Explorer also features an advanced bearingless five blade main rotor with composite blades, plus carbonfibre construction tail and fuselage.[1] 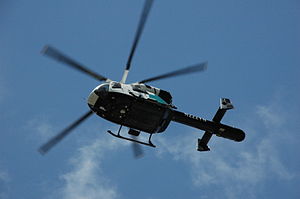 An MD Explorer operated as an air ambulance by Calstar