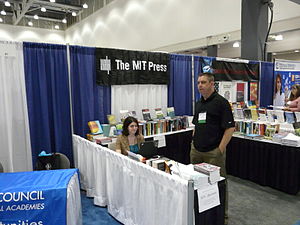 The MIT Press is a university press affiliated with the Massachusetts Institute of Technology (MIT) in Cambridge, Massachusetts (United States).

The MIT Press traces its origins back to 1926 when MIT published under its own name a lecture series entitled Problems of Atomic Dynamics given by the visiting German physicist and later Nobel Prize winner, Max Born. Six years later, MIT's publishing operations were first formally instituted by the creation of an imprint called Technology Press in 1932. This imprint was founded by James R. Killian, Jr., at the time editor of MIT's alumni magazine and later to become MIT president. Technology Press published eight titles independently, then in 1937 entered into an arrangement with John Wiley & Sons in which Wiley took over marketing and editorial responsibilities. In 1962 the association with Wiley came to an end after a further 125 titles had been published. The press acquired its modern name after this separation, and has since functioned as an independent publishing house.[1]

A European marketing office was opened in 1969, and a Journals division was added in 1972. In the late 1970s, responding to changing economic conditions, the publisher narrowed the focus of their catalog to a few key areas, initially architecture, computer science and artificial intelligence, economics, and cognitive science. Other areas, such as technology and design, have been added since. The latest addition is environmental science.[1]

In January 2010 the MIT Press published its 9000th title,[1] and published about 200 books and 30 journals. In 2012 the Press celebrated its 50th anniversary, including publishing a commemorative booklet on paper and online.[2]

The MIT Press is a distributor for such publishers as Zone Books and Semiotext(e). In 2000, the MIT Press created CogNet, an online resource for the study of the brain and the cognitive sciences.[4]

The MIT Press also operates the MIT Press Bookstore[5] showcasing both its front and backlist titles, along with a large selection of complementary works from other academic and trade publishers. The retail storefront is located next to the inbound Kendall Square Station of the MBTA Red Line subway in Cambridge, Massachusetts. The Bookstore offers customized selections from the MIT Press at many conferences and symposia in the Boston area, and sponsors occasional lectures and book signings at MIT.[citation needed]

In 1981 the MIT Press published its first book under the Bradford Books imprint, Brainstorms: Philosophical Essays on Mind and Psychology by Daniel C. Dennett.

The Press uses a logo designed by its longtime art director, Muriel Cooper, in 1962.[6] The design is based on the lower-case letters "mitp," hence the tall "t" at the fifth stripe and the drop "p" at the sixth-and-seventh stripe. The logo is somewhat reminiscent of the trigrams of the I Ching.[7] The logo later served as a touchtone for the MIT Media Lab logo, which was redesigned in 2015 by Pentagram.[6]