MLB Network is an American television sports channel dedicated to baseball. It is primarily owned by Major League Baseball,[2] with television providers Comcast (through its NBC Sports Group), DirecTV, Time Warner Cable and Cox Communications having minority ownership.[3] The channel's headquarters and studios are located in the Secaucus, New Jersey[4] facility which formerly housed MSNBC's studios. MLB Network's studios also house NHL Network with some studio sharing, which came under the management of MLB Advanced Media in mid-2015 and transferred most operations from the network's former Toronto home base. Tony Petitti, former executive producer of CBS Sports, was named the network's first president. Petitti served as MLB Network's president until December 2014 when he was appointed as Chief Operating Officer of Major League Baseball. Rob McGlarry who worked as Senior and later Executive Vice-president of Business Affairs at MLB Network since 2009 was named the network's second President.[5]

Major League Baseball became the fourth major North American professional sports league to launch its own 24-hour cable network. NBA TV dates back to 1999, the NHL Network to 2001 (though not in the United States until 2007), and the NFL Network to 2003. However, MLB Network is carried in the most households of these four networks, as it is available on all of the top ten video operators in the United States.

MLB Network soft-launched on December 16, 2008 with a rolling automated loop of archival programming and promotions for the network for cable systems that carried the network's transmissions leading up to the January 1 launch. The channel fully launched at 6 PM EST with the premiere of Hot Stove.

In April 2012, MLB Network's standard definition feed shifted to a 16:9 letterbox format. Both of the network's SD and HD feeds now show the same format.

The network has signed contracts with numerous cable and satellite carriers, including DirecTV, Dish Network, Verizon Fios, Cablevision, Comcast, Cox Communications, Time Warner Cable, Bright House Networks, and AT&T Uverse. In a deal that was pioneered by other sports league owned channels, MLB tied carriage of the MLB Network to the ability to carry the popular out of market MLB Extra Innings package. In return, cable and satellite providers were offered a minority share of the new network.

On March 26, 2010, it was announced that satellite radio station MLB Home Plate will be rebranded to MLB Network Radio which will simulcast some MLB Network programs such as MLB Tonight and Hot Stove. The switchover began on April 4, the first day of the 2010 MLB season.[7]

At launch, no announcement was made about MLB Network availability in Canada, home of the Toronto Blue Jays. Network officials had been in contact with Blue Jays owner Rogers Communications (owner of Rogers Cable, the largest cable provider in Canada) about making MLB Network available in Canada, but emphasized prior to the channel's launch that a deal was not imminent.[8]

In August 2008, Rogers secured Canadian Radio-television and Telecommunications Commission (CRTC) approval for a Canadian digital channel tentatively called "Baseball TV".[9] This license could have been used to launch a localized version of MLB Network with domestic advertising and additional Canadian content, along the lines of NBA TV Canada, which is owned by the parent company of the Toronto Raptors but uses much of the content of the league's U.S. channel NBA TV. It was reported initially that Rogers intended to pursue this approach to bring MLB Network to Canada.[10] However, the licence was issued on the condition the channel launch by August 2011, which did not occur.[9]

Rogers ultimately agreed to sponsor MLB Network's request to be added to the CRTC's list of approved foreign television services, which would permit Canadian cable and satellite providers to import the American feed, as has occurred previously with similar niche-sports services such as Big Ten Network, NFL Network and Golf Channel.[11] The application was published for public comment on June 13, 2012[12] and was approved on November 21, 2012.[13] In the interim, the Rogers-owned Sportsnet One aired selected programs from MLB Network, including Quick Pitch and Intentional Talk.[11]

The 720p high definition simulcast of MLB Network launched simultaneously to the regular channel. After much discussion, MLB Network decided to use the 720p format instead of 1080-line-interlace because it believes 720p shows the motion of baseball more accurately and will degrade less when recompressed by cable operators to save bandwidth. As Mark Haden (VP of engineering and IT of MLB Network) says: "That's our best shot of maintaining quality to viewers."[18] All studio programs and original shows are shot in HD, as well as all self produced games such as those of the 2009 World Baseball Classic and Thursday Night Baseball, as well as simulcasted locally produced games. The network also remastered 30 World Series films in high definition.[19]

On April 14, 2016, it was announced that 25 MLB Network Showcase games will be broadcast in 4K ultra-high definition exclusively on DirecTV in the 2016 season, beginning April 15.[20]

MLB Network airs several live games a week. These games are blacked out in the participating markets of the two teams (unless listed otherwise). Blacked out markets receive an alternate game or pre-taped programming.

In 2012, MLB Network aired its first ever postseason telecasts. The first telecast took place on October 7 and featured the Detroit Tigers hosting the Oakland Athletics at Comerica Park in Detroit for game two of the 2012 ALDS. Matt Vasgersian called the game alongside analyst Jim Kaat. The second telecast took place on October 10 and featured the Washington Nationals hosting the St. Louis Cardinals at Nationals Park in Washington, D.C. for game three of the 2012 NLDS; this was the Nationals first home postseason game since moving to Washington, D.C. at the start of the 2005 season. Bob Costas provided the play-by-play commentary alongside analyst Jim Kaat.[23]

International live game coverage self-produced by MLB Network includes the World Baseball Classic and the Caribbean Series.[2] The 2014 Sydney Cricket Ground opening series from Syndey between the Dodgers and Diamondbacks was a co-production between MLB Network and ESPN Australia, along with the Nine Network/GEM, which held the home rights for the broadcasts. Starting 2015 season, MLB Network produces MLB International coverage of the MLB All-Star Game and the World Series.

The channel also carries live development league games, and occasionally live college games. In August 2009, they aired youth baseball championships, including the RBI World Series and the Cal Ripken World Series. It also airs some games of the Arizona Fall League including the championship.

In 2012, MLB Network took over the pre-game production responsibilities for the MLB on Fox package, producing Fox Saturday Baseball and postseason pre-game shows from Secaucus and on-location. The show featured Matt Vasgersian or Greg Amsinger and two analysts from a rotating roster of MLB Network's personalities (Eric Byrnes, Kevin Millar, Dan Plesac, Harold Reynolds, Bill Ripken, or Mitch Williams).[24] The show used Fox's graphics and theme songs. Fox took back control of the pregame show in 2014 when the "Game of the Week" package was eliminated. 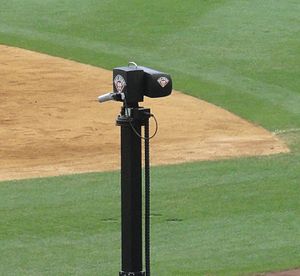 MLB Strike Zone is a channel that launched on April 10, 2012 that allows viewers to see every game across MLB, with up-to-the-minute highlights, and live look-ins and updates, without commercials, in a similar format to NFL RedZone. The channel currently airs on Tuesday and Friday nights during the regular season. Dish Network, DirecTV, Verizon FiOS, Time Warner Cable, Bright House Networks, Cox Communications, and AT&T U-verse are currently the only providers that offer the channel.[35]

The Secaucus-based studios have two main sets, both named after famous players. "Studio 3", named in honor of Babe Ruth, serves as the home for all studio programs, while "Studio 42", honoring Jackie Robinson, is a half-scale baseball field where demonstrations by the network's analysts take place, 'Intentional Talk', and 'MLB Now' is presented, along with interview programs where an audience is needed for atmosphere. Studio 42 is also the home of the early rounds of the Major League Baseball Draft. The studio includes seating for over 125 people, along with elements such as a functioning manual scoreboard and a standings wall for each league and division.

With the launch of Intentional Talk in 2011, the hosts Chris Rose and Kevin Millar are not always available in the MLB Network studios. When this occurs, the show is usually shown as a split screen in which Chris Rose is at his house in Los Angeles, CA and Kevin hosts from his house in Austin, TX also known as "Studio 1-5" for Millar's uniform number.

On November 12, 2012, MLB Network introduced a third set, "Studio K", for the new daily morning offseason show, Hot Stove and guests analysts/insiders on 'High Heat'. During the premiere episode, hosts Matt Vasgersian and Harold Reynolds said that the studio was constructed from the building's mail room, explaining its small size.[36]

The network had planned to launch permanent studios from a new tower in Manhattan's Harlem neighborhood by 2011.[39] However, because of the 2008 financial crisis, the building project was scaled back and later canceled in late November 2008.

With the August 2015 announcement that MLB Advanced Media would take over the digital properties of the National Hockey League, it was announced that NHL Network would re-locate its studios and operations to the facilities of MLB Network.[40][41] The channel temporarily originated its studio programming from Studio K and Studio 21, until the completion of a dedicated studio in April 2016.[42] In honor of the NHL Stadium Series playing at the Colorado Rockies' Coors Field, a scale hockey rink was built on Studio 42 in February 2016 for cross-promotional appearances on NHL Network and MLB Network.[43]