From Infogalactic: the planetary knowledge core
Jump to: navigation, search
Not to be confused with MLC Tower or Mutual Life & Citizens Assurance Company Building.

The MLC Centre is a skyscraper in Sydney, Australia. This office building is 228 metres (748 ft) high[1] and has 67 storeys.[2] It was designed by Sydney architect Harry Seidler, and remains one of his most definitive works. The building was awarded the Sir John Sulman medal by the Royal Australian Institute of Architects.[1]

Occupants include the Sydney Consulate of the United States of America. The podium of the building includes a shopping centre with several exclusive fashion labels and a 1,186 seat theatre, the Theatre Royal. The street address is 19-29 Martin Place Sydney.

The building is undergoing a $100m repair project which will install hybrid corrosion protection to the facade. The project is expected to retain the original appearance of the structure but remedy damage to exposed aggregate precast concrete facade panels caused by expansive corrosion of steel reinforcement. 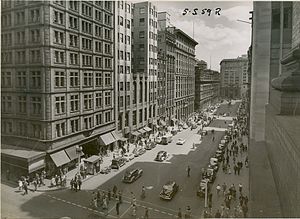 Martin Place in the early 1950s. The building on the corner to the left is the Commercial Travellers Club Building and the 'modern' (c1930) twin-wings of the Australia Hotel next to it were demolished in 1971-2 to make way for the MLC Centre.

The building's construction was controversial, since it brought about the demolition in 1971-2 of the famous 19th century Australia Hotel, the Theatre Royal, and the splendid Commercial Travellers Club building on the corner of Martin Place, all of which formerly stood on the site, as well as much of the historic Rowe Street precinct.