MOLLE (pronounced /ˈmʊl.liː/, as in the female name) is an acronym for Modular Lightweight Load-carrying Equipment. It is used to define the current generation of load-bearing equipment and backpacks utilized by a number of NATO armed forces, especially the British Army and the United States Army. The system's modularity is derived from the use of PALS webbing as rows of heavy-duty nylon stitched onto the vest to allow for the attachment of various MOLLE-compatible pouches and accessories. This method of attachment has become a de facto standard for modular tactical gear, replacing the ALICE system used in the earliest modular vest systems (which is still in use with many police forces). It is produced for the United States government under contract by several contractors, such as Ehmke Manufacturing/High Ground Gear, as well as Eagle Industries.[1][2][3] 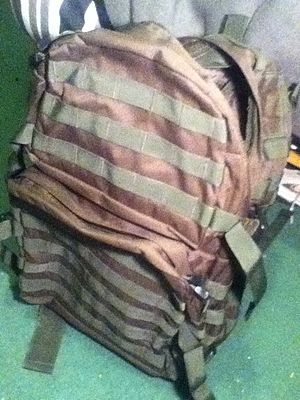 The Tactical Assault Panel replaces the fighting load carrier. It is a bib-like chest rig that can be used alone or mounted on the Improved Outer Tactical Vest or Soldier Plate Carrier System.[4] The T.A.P. is covered with PALS webbing and storage for up to eight rifle magazines(6 - 5.56 magazines + 2 - 7.62 NATO magazines or 8 - 5.56 magazines).[5][6]

The MOLLE 2 Rucksack and Rucksack Frame has PALS webbing stitched at places to allow for additional pouches.[7] The Current Assault pack is being phased out in favor of a larger medium-sized rucksack.

Pouches of various utility that can be attached wherever PALS webbing exists. One type is a "sustainment pouch", which holds three MREs.[1] Molle pouches currently are commonly used to carry ammunition, gas masks, batons, flares, grenades, handcuffs and pepper spray, and custom pouches include Molle compatible pistol holders, hydration pouches and utility pouches. These pouches are normally secured through the use of straps, alice clips or speedclips.

The term MOLLE is used not only to describe the specific system manufactured by Speciality Defense Systems, but also interchangeably to describe generically all load bearing systems and subsystems that utilize the woven PALS (Pouch Attachment Ladder System) webbing for modular pouch attachment (though MOLLE is proprietary to Natick Labs, most use MOLLE and PALS interchangeably). Derivatives based on the MOLLE attachment method (such as the Tactical Tailor MALICE clip system) have also been developed. Any system that utilizes modular attachment methods and is usable with U.S. general issue MOLLE components is often considered "MOLLE-compatible" or is called a "MOLLE" system. Increasingly, non-military manufacturers are incorporating MOLLE technology into outdoor equipment.

There are three general modes of attachment in the MOLLE arena; the "Natick Snap", which uses a polyethlyene reinforced webbing strap with the 'pushthedot' snap for security; the polymer "Malice" clip, developed by Tactical Tailor as an alternative to the Natick Snap concept, which interweaves like the Natick Snap but terminates in a semi-permanent closure that requires a screwdriver or other flat-tipped object to disengage; and a variety of attachments that fall into the "Weave & Tuck" category, in which the end of an interwoven strap is tucked into an item's backing after attachment to a vest or pack (Paraclete's SofStrap and Spec Ops Brand's hybrid attachment).

The MOLLE system was introduced in 1997. However, it did not see widespread issue until after the September 11, 2001, attacks and was used by U.S. troops serving in Afghanistan and, later, Iraq. Early criticisms of the MOLLE system emerged, particularly from the Army. Many of these criticisms have centered on the sustainment-load pack and frame, due to the external plastic frame being too fragile and subject to breaking in the field (since mitigated), that the zippers have a tendency to burst when stuffed full, and that the pack's straps lack sufficient length to be used with bulky body armor.[3] Further, the first generation of this system utilized a "ball & socket" interface between the frame and rucksack belt (which in itself formed the waistbelt of the MOLLE vest). This interface method led to numerous lower back injuries due to the ball (mounted on the frame) missing the socket interface on the waistbelt and impacting the user's body. Subsequent redesign of the SDS MOLLE led to the deletion of this "feature", and thus the vest (FLC) and ruck/frame were separate non-integral items.

The United States Marine Corps wanted a larger load-bearing capability, a smaller overall volume, the ability to carry 60 mm and 81 mm mortar rounds external to the pack, and a simpler overall layout and organization of the system's parts. In 2004, the Marine Corps adopted a new off-the-shelf pack design by Arc'teryx and introduced it into the Fleet as the ILBE, or "Improved Load Bearing Equipment". The ILBE is now being replaced with the USMC Pack.[8][9]

A further adaptation by a private company has developed MOLLEminus[10] systems. MOLLEminus systems are made from a proprietary fabric, claiming to be a superior alternative to current-issue Cordura nylon. Rather than conventionally sewing on the MOLLE webbing, MOLLEminus has the MOLLE cut into the material itself, forming a grid of slots. This theoretically eliminates any stress points that could weaken the integrity of the material.[promotional language]