MPH Group Malaysia Sdn Bhd[1] is a Malaysian group of companies best known for its book retailing and online retailing services as well as being involved in the printing, publishing and distribution of books and library services in Malaysia and Singapore. Its bookstore chain, MPH Bookstores Sdn Bhd, headquartered in Petaling Jaya, Selangor, is among the largest in Malaysia after Popular.[2][3]

File:Triglot Vocabulary.pdf Captain W.G. Shellabear is recognized as the founder of MPH. In 1890, he established the Amelia Bishop Press in Singapore, publishing Christian literature. The company eventually began publishing secular works as well, changing its name to the American Mission Press in 1893. In the 1900s, Rev. William T. Cherry expanded the organization's activities to printing, publishing, bookselling, and book distribution. He changed the company's name to Methodist Publishing House in 1906, giving rise to the acronym 'MPH', as the company is known today.[2]

MPH underwent further name changes between the 1920s and 1960s but the acronym remained. The company also changed ownership multiple times, being acquired by an Indonesian consortium in 1966, then a Hong Kong group in 1972 and finally by Singaporean entrepreneur Simon Cheong in 1999. In 2002, Malaysian businessman Syed Mokhtar Al-Bukhary, through Jalinan Inspirasi Sdn Bhd, acquired the company. This was the first time MPH became a wholly Malaysian-owned company.[2] 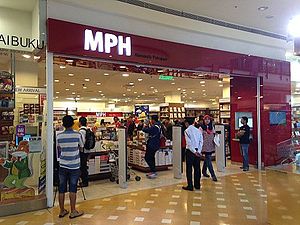 MPH Bookstores currently has 32 outlets in Malaysia and four in Singapore.[1][2] It has a heavy presence in the Klang Valley, operating in major shopping outlets including Nu Sentral, Subang Parade, Giant Stadium Shah Alam, KLIA2, 1 Utama and The Curve. In Singapore, MPH bookstores are located in Raffles City, PARCO Millenia and along Robinson Road.[1]

MPH has also branched out into the online book retailing in 2000, with the highly popular MPHOnline portal providing a platform for customers to have a safe and easy way of purchasing products from MPH.