MS Marco Polo is a cruise ship owned by Global Maritime, under charter to UK-based Cruise & Maritime Voyages,[6] having been previously operated by Transocean Tours, Germany.[5] She was built in 1965 by Mathias-Thesen Werft, East Germany as Aleksandr Pushkin for the Soviet Union's Baltic Shipping Company. After major alterations and additions, the ship sailed as Marco Polo for Orient Lines from 1993 to 2008.[1]

The Aleksandr Pushkin was constructed at VEB Mathias-Thesen Werft in Wismar, East Germany. She was the second ship of the Ivan Franko class (also referred to as "poet" or "writer" class), named after the Russian poet Alexander Pushkin.[12] The construction of this class featured some notable differences from contemporary ships built in the west. Amongst other things they offered cabins for six people and had three taps in the bathrooms - for hot, cold and sea water - Both of these features had long since been abandoned in western liners.[9] The ships also featured certain forward-looking features, such as all outside accommodation for both passengers and the crew, and an indoor/outdoor swimming pool with a sliding glass roof.[13] To enable the ships to navigate through broken ice, they were constructed with greater hull strength and stability than usual in passenger ships of this size.[14] The Ivan Franko-class ships were also built with the use as a troopship in mind. Due to this they had unusually large provision and storage areas, enabling a cruising range of over 10,000 nautical miles (19,000 km).[14] As a more visible sign of potential military use, the ships were equipped with unusually powerful deck lifting gear, apparently to be able to transport armoured vehicles on board.[9] As built, the ship carried between 650-766 passengers in two classes, with different sources providing different figures.[1][9][12][15] Additionally there were provisions for 500 cabinless passengers.[16]

From 1972 onwards the Ivan Franko-class ships were rebuilt. In the first stage the cargo facilities were eliminated and the forward superstructure extended, allowing for additional public spaces. Stabilizers were also installed in this stage. In the second stage the cabins were re-configured to include berths for all passengers.[16] In a refit during the 1970s a discothèque was added on board the Aleksandr Pushkin, making her the first Soviet ship to have one.[17] 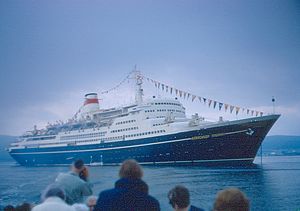 MS Aleksandr Pushkin in the summer of 1970.

The Aleksandr Pushkin entered service in 1965 with the Baltic Shipping Company, one of the three principal Soviet passenger shipping companies (the other two being the Black Sea Shipping Company and the Far Eastern Shipping Company).[1][12] Reports about her service in the Soviet fleet are fragmentary and conflicting. Most sources state she was used to inaugurate the Baltic Shipping Company's regular trans-Atlantic service between Montreal, Canada and Leningrad, and later on used for cruising.[4][9][14][17] Other sources give a more detailed, but somewhat conflicting, accounts. Philip Dawson's book The Liner - Retrospective & Renaissance gives the full route as Leningrad—Helsinki—Copenhagen—London (Tilbury)—Quebec City—Montreal, in addition to which the ship was used for cruising from Montreal to Saint Pierre and Miquelon, The Bahamas and Cuba during the summer months. According to the book, the ship carried just 36 passengers on her first transatlantic crossing.[13] According to Cruisepage.com, she spent only the summer months on Leningrad—Montreal service, while the rest of the year she was used either on crossing from Leningrad to Havana, Cuba or cruising under charter to western companies.[12] Fakta om Fartyg offers a somewhat different account, stating that the ship originally entered service as a cruise ship in 1965, only moving to the Leningrad—Montreal route in April 1966, then spending summers from 1967 until 1979 in Leningrad—Bremerhaven—Montreal route and the rest of the year cruising, and from 1979 exclusively on cruise traffic.[1] It does seem likely the ship called in Helsinki and London on her transatlantic crossings, as according to an article in Helsingin Sanomat the Alexandr Pushkin was popular amongst Finnish passengers sailing to London and Canada; she was the only ship offering crossings from Finland to Canada and the only liner in Helsinki—London service at the time.[17]

According to Philip Dawson, Aleksandr Pushkin ended transatlantic service in 1980, bearing the legend "Official XXII Olympics Carrier" on her side for her final season. At this point she was one of just three passenger liners in transatlantic service, alongside Cunard Line's RMS Queen Elizabeth 2 and Polish Ocean Lines' Stefan Batory.[13] However, according to Ian Boyle's website Simplon Postcards she was chartered to the West Germany-based Transocean Tours between 1979 and 1985.[4] In addition to the liner and cruise service, two sources mention that the Alexandr Pushkin was used in service of the Soviet Navy, particularly in interventions into African countries.[9][15] The British travel writer Gavin Young travelled from Papeete to Callao on the ship, as described in his book Slow Boats Home (1985).[citation needed]

Although not mentioned in any source, photographic evidence suggests that the Aleksandr Pushkin's superstructure was enlarged at some point during her career, with the forward superstructure expanded and rear promenade decks built in.[4]

According to most sources, Aleksandr Pushkin was transferred from the Baltic Shipping Company into the fleet of the Far Eastern Shipping Company in 1985,[1][12][14] while other sources however claim she stayed under Baltic Shipping Company's ownership throughout her career with the Soviet Union.[15] She was apparently chartered to CTC Cruises in 1985, for cruising from Europe and Australia.[1][12] In 1990 she was laid up[15] at Singapore.[1] In 1991 the ship was sold to Orient Lines - the brainchild of cruise lines and hotels entrepreneur Gerry Herrod - and renamed Marco Polo.[1][9][12][14][15] 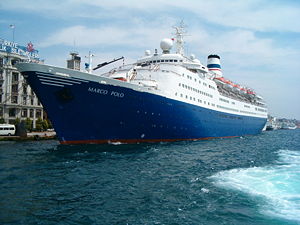 Following the purchase by Orient Lines, the Marco Polo sailed to Neorion Shipyard, Greece,[1][14] where her engines were reconditioned by Sulzer Diesels.[14] Following this she was moved to Perama Shipyard, Greece, where a near-total reconstruction of the ship commenced. Externally this resulted in notable extension of the rear superstructure and heightening of the funnel to maintain the proportions of the ship.[14] Internally the ship was almost entirely rebuilt under the guidance of naval architect Knud Hansen and interior designers Michael and Agni Katzourakis.[12][14] In addition to the more visual changes, the ship was fitted with Denny Brown stabilizers, additional diesel engines and brought up to the latest IMO and SOLAS standards. In total the refit took 2½ years and cost - depending on the source - 20[12] to 60 million dollars.[14]

In 1993, following completions of the conversion, the Marco Polo began a varying itinerary of cruises all over the world, including more unusual destinations such as South-East Asia, Africa, and Antarctica.[12][14] In 2002 Orient Lines was sold to Norwegian Cruise Lines.[11][18] The Marco Polo's cruises continued as before, but as a result of the NCL deal MS Crown Odyssey joined her in the Orient Lines fleet in 2000, turning the company into a two-ship brand.[19] However the Crown Odyssey left the Orient fleet in 2003,[19] and Marco Polo became again the sole ship of the brand. Since 2005 she has also been the sole surviving Ivan Franko-class vessel, the other sisters having either sunk or been scrapped.[4] 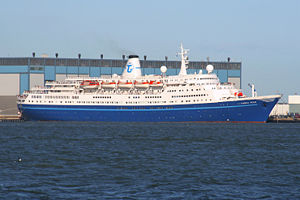 Marco Polo departing Helsinki in 2008 during her service with Transocean Tours.

On 6 July 2009 Marco Polo called at Invergordon, Easter Ross, Scotland on a cruise outbound from Tilbury in Essex. During a health inspection by the local port health officials up to 150 passengers were discovered to have been infected with what was presumed to be norovirus.[24] The number of infected passengers and crew subsequently rose to 400.[25] Also on 6 July a 74-year-old passenger died of a heart attack on board the ship. According to reports from the local health officials he had serious underlying health problems and it was not known if a norovirus infection contributed to his death.[24] On 7 July Transocean Tours decided to cancel the remainder of Marco Polo's ten-day cruise after consulting NHS Highland. Reportedly the company gave the passengers an option to either stay with the ship until she returned to Tilbury on 11 July or to return to their homes earlier by a specially arranged charter train. As of 8 July, three infected people remained in Raigmore Hospital in Inverness.[25]

Some reports indicate that passengers on board Marco Polo's previous cruise, which terminated in Tilbury on 4 July, might also have been infected with norovirus. However, according to Transocean Tours the ship was inspected upon return to Tilbury and no infections were found, although some passengers during the cruise did suffer from gastroenteritis.[26] The London Port Health Authority stated that they were not informed of illness on board the ship when it docked at Tilbury, and as such Transocean Tours could face legal action.[25]

Despite Transocean Tours' intention of keeping the ship in its fleet until 2012,[23] reports emerged in August 2009 that Marco Polo would be chartered to the newly founded, UK-based Cruise & Maritime Voyages for five years from 2 January 2010 onwards.[27][28] Her planned itineraries included cruises from the UK to South America during the northern hemisphere winter months, and from the UK to Northern Europe and the Mediterranean during the summer months.[27]

On 13 March 2013, Cruise & Maritime voyages announced that Marco Polo would be terminating one of her northern lights cruises and go into dry dock for inspection and minor repairs after she had struck an uncharted object under command of the local pilot minutes after sailing from Sortland on 9 March 2013. Her cruise terminated in Antwerp with passengers being transferred to Tilbury and London via the Channel Tunnel or ferry by coach scheduled to arrive mid to late afternoon on Thursday 14 March 2013.[29]

On 15 March 2013, Cruise & Maritime announced that the Marco Polo had entered Antwerp Ship repair yard and, after a survey, repairs could not be completed in time for the next scheduled cruise on 17 March so refunds and compensation were made. She was back in service a few days later.

On 14 February 2014, a passenger died and sixteen people were injured after a freak wave struck the ship in the English Channel during a storm. One seriously injured passenger was taken off by helicopter. The ship was heading to Tilbury with 735 passengers and 349 crew on board.[30][7]

The MS Marco Polo has been the subject of a television programme in the series Mighty Cruise Ships (a spin-off of Mighty Ships) which documented the 2013 voyage to St Petersberg, Russia, and the Baltic States. The ship ran into a force 10 gale in The Baltic.

On 1 November 2014, while docking at the port of Leknes in Lofoten, Norway, a strong breeze sent the cruise ship off course, resulting in the ship running aground at coordinates Lua error in Module:Coordinates at line 668: callParserFunction: function "#coordinates" was not found..[31][32]