On 5–6 May 2010 Somali Pirates hijacked the MV Moscow University, a Liberian-flagged Russian tanker, in the Gulf of Aden. Her crew was freed by the Russian Navy destroyer Marshal Shaposhnikov the following day.

The Russian tanker MV Moscow University (Russian: Московский университет – Moskovskiy Universitet) was attacked on 5 May 2010 by Somali pirates 500 nautical miles (930 km) off the coast of Somalia. The ship fired water cannons and flare pistols at the pirates, and attempted to outmaneuver them, but its constant maneuvers forced it to a speed of nine knots after one hour, after which the pirates attached an assault ladder and began boarding.[1] The captain then ordered that all food and water be hidden in the steering compartment, and activated the ship's distress beacon, after which he and the crew barricaded themselves in the engine room, where they repulsed two attempts by the pirates to force their way in. The pirates would hold the ship for 20 hours.[2] 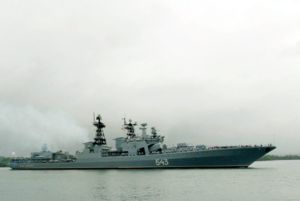 A Royal Australian Air Force AP-3C Orion responded to the MV Moscow University distress signal on the 5 May, and was able to locate the tanker, dead in the water, with three small skiffs alongside - indicating a Somali pirate hijacking. Communications were established between the ship's captain and the Australian Orion aircraft which then relayed communications to the Russian Udaloy-class destroyer Marshal Shaposhnikov.

After the pirates had been disarmed and had their ladders and boats seized, they were set adrift in an inflatable boat after being provided with food and water but with no navigation equipment, some 300 nautical miles (560 km) off Somalia. According to the Russian Ministry of Defence, they did not reach the coast and likely died at sea.[3]

On Summer 2012, a Russian Action film was produced under the name 22 Minutes. The movie is scheduled to be released on May 2, 2013 and is based on real events.[citation needed]