From Infogalactic: the planetary knowledge core
Jump to: navigation, search
For other uses, see Maastrichtian (disambiguation).

The Maastrichtian /mɑːˈstrɪxtiən/ is, in the ICS geologic timescale, the latest age or upper stage of the Late Cretaceous epoch or Upper Cretaceous series, the Cretaceous period or system, and of the Mesozoic era or erathem. It spanned the interval from 72.1 to 66 million years ago. The Maastrichtian was preceded by the Campanian and succeeded by the Danian (part of the Paleogene and Paleocene).[1] 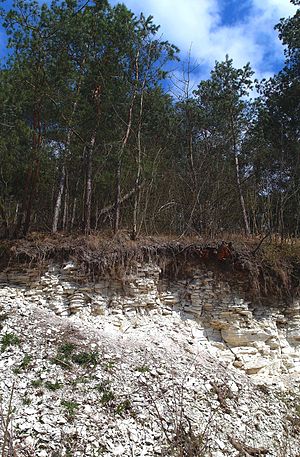 The Maastrichtian was introduced into scientific literature by Belgian geologist André Hubert Dumont in 1849, after studying rock strata of the Chalk Group close to the Dutch city of Maastricht. These strata are now classified as the Maastricht Formation - both formation and stage derive their names from the city. The Maastricht Formation is known for its fossils from this age, most notably those of the giant sea reptile Mosasaurus, which in turn also derives its name from the Dutch city (mosa being Latin for the river Maas).

The base of the Maastrichtian stage is at the first appearance of ammonite species Pachydiscus neubergicus. At the original type locality near Maastricht, the stratigraphic record was later found to be incomplete. A reference profile for the base was then appointed in a section along the Ardour river called Grande Carrière, close to the village of Tercis-les-Bains in southwestern France.[3] The top of the Maastrichtian stage is defined to be at the iridium anomaly at the Cretaceous–Paleogene boundary (K–Pg boundary), which is also characterised by the extinction of many groups of life, such as certain foraminifers and calcareous nannoplankton, all ammonites and belemnites, etc.

The Maastrichtian is commonly subdivided into two substages (Upper and Lower) and three ammonite biozones. The biozones are (from young to old):

The Maastrichtian is roughly coeval with the Lancian North American Land Mammal Age.

The following are summaries of the characteristics of specific Maastrichtian aged formations.

The Bearpaw Formation, also called the Bearpaw Shale, is a sedimentary rock formation found in northwestern North America. It is exposed in the U.S. state of Montana, as well as the Canadian provinces of Alberta and Saskatchewan, east of the Rocky Mountains. It overlies the older Two Medicine, Judith River and Dinosaur Park Formations, and is in turn overlain by the Horseshoe Canyon Formation in Canada and the Fox Hills Sandstone in Montana. To the east and south it blends into the Pierre Shale.

A marine formation composed mostly of shale, it represents the last major expansion of the Western Interior Seaway before it completely receded from northwestern North America by the end of the Cretaceous Period. It includes well-preserved ammonite fossils. Other fossils found in this formation include many types of shellfish, bony fish, sharks, rays, birds, and marine reptiles like mosasaurs, plesiosaurs and sea turtles. The occasional dinosaur remains have also been discovered, presumably from carcasses washed out to sea. 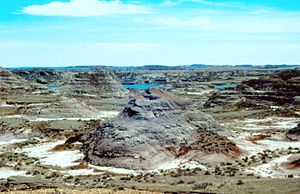 Hell Creek Formation is well exposed in the badlands in the vicinity of Ft. Peck Reservoir.

It is a series of fresh and brackish-water clays, mudstones, and sandstones deposited during the Maastrichtian, the last part of the Cretaceous period, by fluvial activity in fluctuating river channels and deltas and very occasional peaty swamp deposits along the low-lying eastern continental margin fronting the late Cretaceous Western Interior Seaway. The climate was mild.[4] The iridium-enriched Cretaceous–Paleogene boundary, which separates the Cretaceous from the Cenozoic, occurs as a discontinuous but distinct thin marker bedding within the Formation, near its uppermost strata.

The Horseshoe Canyon Formation is part of the Edmonton Group and is up to 230 m in depth. It is Late Campanian to Early Maastrichtian in age (Edmontonian Land Mammal Age) and is composed of mudstone, sandstone, and carbonaceous shales. There are a variety of environments, which have yielded a diversity of fossil material. The Horseshoe Canyon Formation outcrops extensively in the area of Drumheller, Alberta, as well as further north along the Red Deer River near Trochu, and also in the city of Edmonton.

The Sarir field was discovered in southern Cyrenaica during 1961 and is considered to be the largest oil field in Libya, with estimated oil reserves of 12 Gbbl (1.9 km3).[5] Sarir is operated by the Arabian Gulf Oil Company (AGOCO), a subsidiary of the state-owned National Oil Corporation (NOC).

The Sarir stratigraphic column generally resembles succession patterns throughout the Sirte Basin, with some variations. In the early regressive phase, basal sandstones were deposited on a Precambrian basement of igneous and metamorphic rocks. Sandstones are dated on angiosperm pollen as younger than Albian, probably from the Late Cretaceous. After a lengthy hiatus, represented by unconformity and sandstone erosion, a transgressive sequence of red, green, and purple Anhydrite shales was laid. Variegated bed remnants occur in crestal sections of many northern structures, such as in wells B-1-65 and C-1-80.

Above the transgressive sequence are Late Cretaceous shales with tight, micritic carbonate, marking the top of the Mesozoic. These shales thicken into troughs, providing the field's sole source rock. The youngest fauna are Maastrichtian, with an apparent disconformity between the Late Cretaceous and Paleocene, marked by high levels of gamma radiation on logs.

The Berivotra Formation is an Upper Cretaceous (Maastrichtian) sedimentary rock marine formation found in Madagascar, that is contemporary to the terrestrial Maevarano Formation.

The Maevarano Formation is an Upper Cretaceous sedimentary rock formation found in the Mahajanga Province of northwestern Madagascar. It is most likely Maastrichtian in age, and records a seasonal, semiarid environment with rivers that had greatly varying discharges. Notable animal fossils recovered include the theropod dinosaur Majungasaurus and the early birds Rahonavis and Vorona, and the titanosaurian sauropod Rapetosaurus.

The Lameta Formation is a sedimentary rock formation found in Madhya Pradesh, Gujarat, and Maharashtra, India. It is of Maastrichtian age (Upper Cretaceous), and is notable for its dinosaur fossils. Many dubious names have been created for isolated bones, but several genera of dinosaurs from these rocks are well-supported, including the titanosaur sauropod Isisaurus, the abelisaurs Indosaurus, Indosuchus, Laevisuchus, and Rajasaurus and possible stegosaurs.[6][7]

The Barun Goyot Formation, dating from the Late Cretaceous Period, is located within and is widely represented in the Gobi Desert basin, in the Ömnögovi Province of Mongolia.

It was previously known as the "Lower Nemegt Beds", occurring beneath the Nemegt Formation and above the Djadokhta Formation. It is approximately 4 inches (100 mm) in thickness and was laid down roughly 80-71 mya, making it uncertain whether it should be classed as Campanian or Maastrichtian, although the latter is less likely. The Barun Goyot Formation preserves an environment of sand dunes, created from wind-eroded rocks (aeolian dunes).

The Nemegt Formation is a Late Cretaceous sedimentary formation in the Gobi Desert of Mongolia. It overlies, and in some places interdigitates with, the Barun Goyot Formation. It consists of river channel sediments and contains fossils of fish, turtles, crocodilians, birds and a diverse fauna of dinosaurs. The climate was wetter than when the preceding formations were deposited; there seems to have existed at least some degree of forest cover. 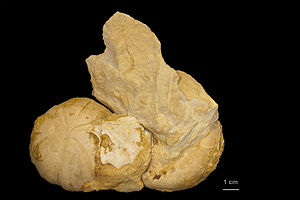 Several lineages of modern birds existed, though many were of lineages that differed profoundly from their relatives of today and thus are not their ancestors, but became extinct in the Cenozoic. For example, Vegavis iaai indicates that at least four lineages of Anseriformes were distinct: Anhimidae, Anatidae, Anseranatidae and Presbyornithidae (and possibly Dromornithidae), and that there was at least one Galliformes lineage too, and apparently the Gastornithiformes were also distinct. It is also highly likely that there was at least one, and probably several, lineages of Charadriiformes, that penguins were about to split from their closest relatives or had already done so, and that if the Metaves are a valid group they would presumably have been distinct too. Also, paleognaths were of course long distinct from neognaths.

Traditionally, pterosaur faunas of the Maastrichtian were assumed to be dominated by azhdarchids, with other pterosaur groups having become extinct earlier on. However, more recent findings suggest a fairly composite pterosaur diversity: at least two nyctosaur remains date to this period, as do a few pteranodontids, and Navajodactylus, tentatively assigned to Azhdarchidae, lacks any synapomorphies of the group.[8][9] This seems to underscore a higher diversity of terminal Cretaceous pterosaurs than previously thought.[10][11] 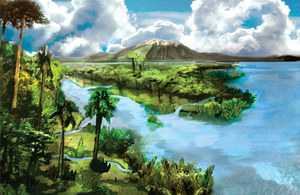