From Infogalactic: the planetary knowledge core
Jump to: navigation, search
File:Lisboa.jpg
The entry into the Lisboa corner, Guia Circuit

The Macau Grand Prix is a motor-racing event held annually in Macau, one of China's Special Administrative Regions. It is known for being the only street circuit racing event in which both car and motorcycle races are held. Every year in November hundreds of racing drivers and riders compete in different categories of motor-racing, including single-seaters, touring cars and motorbikes.

One of the highlights of the race weekend is the Macau Formula Three Grand Prix, featuring many national Formula Three champions and drivers from around the world, with the winner being awarded the FIA Formula 3 Intercontinental Cup. Due to the challenging nature of the circuit, which consists of fast straights (a Formula Three car can reach a top speed of 275 km/h (171 mph) at the end of this stretch[1]), tight corners and uncompromising crash barriers, the Macau Grand Prix is famously known as one of the most demanding circuits in the world. Many current or former Formula One drivers have participated in the event early in their careers and some of them have won the prestigious prize. Famous winners include Riccardo Patrese, Ayrton Senna, Michael Schumacher, David Coulthard, Ralf Schumacher and Takuma Sato.

From 2005 until 2014, the double-header Guia Race of Macau, which traditionally features touring cars from world-renowned car manufacturers, had officially become the final two races of the FIA World Touring Car Championship (WTCC).

Since 2015, it holds the final two races of TCR International Series.

The Macau Grand Prix was originally conceived in 1954 as a treasure hunt around the streets of the city,[2] but shortly after, it was suggested that the hunt's track could host a professional racing event for local motor enthusiasts. The race continued as an amateur race until 1966, when Belgian driver Mauro Bianchi entered the race in an Alpine A220 (chassis #1722).[3] Alpine Renault had also sent engineer, Jean-Paul Castilleux, to assist Bianchi with technical aspect of the car.[4] Bianchi's victory and exposure led to more professional racing teams entering the Grand Prix in the following years.

The motorcycle race was introduced in 1967, and in that year the first fatal tragedy struck the race: double champion Dodjie Laurel was killed when he lost control of his car and crashed. This raised the alarm for more safety improvements for the race.

The first Guia race for touring cars was held in 1972. Macau's Guia Race for touring cars is a particular race for this category, as very few races with these cars are held on street circuits. Since 2005 the race has officially become the final two rounds of FIA World Touring Car Championship.

In 1983, it was decided by the organisers that since Formula Pacific was becoming obsolete, the race would be held as a Formula Three event. Initially, they wanted to run a F2 race, but as they were unwilling to make any large circuit modifications, which included cutting down trees, the organisers decided to adopt Formula 3 cars for the feature race and it was sanctioned by FIA as the F3 World Cup title race. At the same time, Yokohama Tire was officially designated as the sole supplier of control tires for the competitors.[5]

This turned out to be a right decision, given the fact that since then it has raised the reputation of the event in the motorsport world by attracting the best young drivers from Europe and Japan to compete in the event. The first F3 race was won by a young Ayrton Senna. The race in 1990 was a memorable one, as Michael Schumacher and Mika Häkkinen were involved in an incident when they were in positions 1 and 2 going into the final lap. At the main straight just after the Mandarin Oriental Bend, Häkkinen hit the back of Schumacher's car and crashed out when he attempted to overtake him. Schumacher's car was able to continue with its rear wing damaged and eventually won the race with the best aggregate time. Other notable winners include Formula One drivers David Coulthard, Ralf Schumacher and Takuma Sato. Since the introduction of F3 races, the Macau GP has gradually become a stepping stone for many F3 drivers to higher class motor-racing competitions such as the GP2 series and Formula One.

Macau is a special event for motorcycle riders too. The Motorcycle Grand Prix has featured many famous riders such as Kevin Schwantz, Carl Fogarty, Ron Haslam and Michael Rutter. 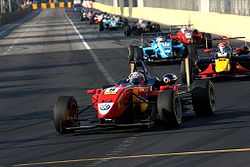 The 2008 Macau Grand Prix in progress.

The Macau Grand Prix race weekend normally starts on the Thursday and ends on the Sunday on the second or third week of November. The first two days (Thursday and Friday) are generally scheduled for practicing and qualifying. All races are held on Saturday and Sunday, with the final rounds of the heavyweights Macau Formula 3 Grand Prix and the Guia Race (scheduled to be the final 2 rounds of the FIA World Touring Car Championship since 2005) held on the last day. Both the Macau Formula 3 Grand Prix and the Guia Race are sanctioned by the FIA and the winner of the Macau Formula 3 Grand Prix is awarded the FIA Intercontinental Cup. Apart from the two major races held at the race weekend, the Macau Motorcycle Grand Prix is also one of the highlights of the weekend since it features former or current racers of the Superbike World Championship. Other races include the Formula BMW Pacific race, and for locals and Hong Kong drivers who want a slice of the action, Interport Race for novices, CTM Cup race the experienced.

Races that have been held in the past but have since been discontinued includes the ATCS race, Supercar Cup for road going exotic sports cars, the Formula Renault race, the Porsche Carrera Cup Asia race, the scooter race for locals and in the past but on a less than frequent basis, a Jackie Chan endorsed race for celebrity women drivers (partnered with pro racers) involving Mitsubishis, with whom Chan hold a sponsorship deal.

Characteristics: A street circuit with a combination of fast straights and tight corners. It is recognised[6] as one of the most challenging circuits in the world.

The FIA GT World Cup is a race for GT3-spec cars, organized by the Stéphane Ratel Organisation (SRO) and the Automobile General Association Macau-China (AAMC). The event was confirmed by the FIA at the World Motor Sport Council in Geneva on 20 March 2015.[17] The winning driver of the event is the winning driver of the Main Race, but the award for the FIA GT World Cup for Manufacturers is presented to the manufacturer supplying the cars with a manufacturer entry with the highest number of points after addition of the points of its two best cars awarded according to the result of the Main Race.