The Maccabean Revolt (Hebrew: מרד החשמונאים‎; Greek: Επανάσταση των Μακκαβαίων) was a Jewish rebellion, lasting from 167 to 160 BC, led by the Maccabees against the Seleucid Empire and the Hellenistic influence on Jewish life. 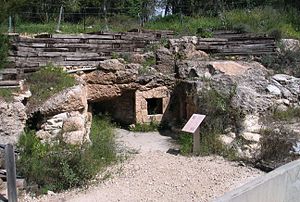 Tomb of the Maccabees near present-day Mevo Modi'im

In the narrative of I Maccabees, after Antiochus issued his decrees forbidding Jewish religious practice, a rural Jewish priest from Modiin, Mattathias the Hasmonean, sparked the revolt against the Seleucid Empire by refusing to worship the Greek gods. Mattathias killed a Hellenistic Jew who stepped forward to offer a sacrifice to an idol in Mattathias' place. He and his five sons fled to the wilderness of Judah. After Mattathias' death about one year later in 166 BC, his son Judah Maccabee led an army of Jewish dissidents to victory over the Seleucid dynasty in guerrilla warfare, which at first was directed against Hellenized Jews, of whom there were many. The Maccabees destroyed pagan altars in the villages, circumcised boys and forced Jews into outlawry.[1] The term Maccabees as used to describe the Jewish army is taken from the Hebrew word for "hammer".[2]

The revolt itself involved many battles, in which the Maccabean forces gained notoriety among the Seleucid army for their use of guerrilla tactics. After the victory, the Maccabees entered Jerusalem in triumph and ritually cleansed the Temple, reestablishing traditional Jewish worship there and installing Jonathan Maccabee as high priest. A large Seleucid army was sent to quash the revolt, but returned to Syria on the death of Antiochus IV. Its commander Lysias, preoccupied with internal Seleucid affairs, agreed to a political compromise that restored religious freedom.

Professor John Ma of Oxford University argues that it is possible to read the main sources for the events as suggesting that the loss of religious and civil rights by the Jews in 168 BC was not a result of religious persecution, but rather an administrative punishment by the Seleucid Empire in the aftermath of local unrest, and that the Temple was restored upon petition by the High Priest Menelaus, rather than liberated and rededicated by the Maccabees.[3]

The Jewish festival of Hanukkah celebrates the re-dedication of the Temple following Judah Maccabee's victory over the Seleucids. According to Rabbinic tradition, the victorious Maccabees could only find a small jug of oil that had remained uncontaminated by virtue of a seal, and although it only contained enough oil to sustain the Menorah for one day, it miraculously lasted for eight days, by which time further oil could be procured.[4] The miracle of the oil is widely regarded as a legend and its authenticity has been questioned since the Middle Ages.[5]