The Roman province of Macedonia (Latin: Provincia Macedoniae, Greek: Ἐπαρχία Μακεδονίας) was officially established in 146 BC, after the Roman general Quintus Caecilius Metellus defeated Andriscus of Macedon, the last self-styled King of the ancient kingdom of Macedonia in 148 BC, and after the four client republics (the "tetrarchy") established by Rome in the region were dissolved. The province incorporated ancient Macedonia, with the addition of Epirus, Thessaly, and parts of Illyria, Paeonia and Thrace. This created a much larger administrative area, to which the name of 'Macedonia' was still applied. The Dardanians, to the north of the Paeonians, were not included, because they had supported the Romans in their conquest of Macedonia.

After the reforms of Diocletian in the late 3rd century, Epirus Vetus was split off, and sometime in the 4th century, the province of Macedonia itself was divided into Macedonia Prima in the south and Macedonia Secunda or Salutaris in the north. These provinces were all subordinate to the Diocese of Macedonia, one of three dioceses comprising the praetorian prefecture of Illyricum. When the Prefecture was divided between the Western and Eastern Empires in 379, the Macedonian provinces were included in Eastern Illyricum. With the permanent division of the Empire in 395, Macedonia passed to the East, which would evolve into the Byzantine Empire. 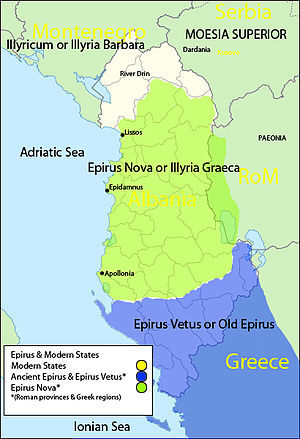 The Roman provinces of Epirus Vetus and Epirus nova in relation to modern borders.

Epirus Vetus ("Old Epirus") was a province in the Roman Empire that corresponded to the region of Epirus. Between 146 BC and 395, it was incorporated into the Roman province of Macedonia. The capital[2] of Epirus vetus was Nicopolis, a city founded by Octavian in memory of his victory over Antony and Cleopatra at Actium.

Epirus Nova (New Epirus) or Illyria Graeca[3][4][5] or Illyris proper was a province of the Roman Empire established by Diocletian during his restructuring of provincial boundaries. Until then, the province belonged to the province of Macedonia;[6][7] it later became a theme[8] of the Byzantine Empire. Dyrrachium (or Epidamnus) was established as the capital of Epirus Nova.[9]

The region of Epirus Nova corresponded[10] to a portion of Illyria that was then "partly Hellenic and partly Hellenized".[11] The area was the line of division[12] between the provinces of Illyricum and Macedonia and suffered from terrible earthquakes.

The Ostrogoths, led by Theodoric, were stopped in Epirus Nova by Sabinianus Magnus.[13] They entered in 479 and remained until 482.[14] 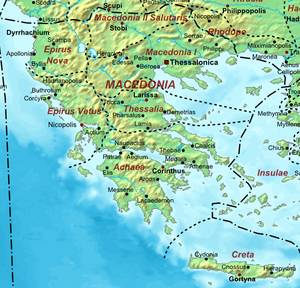 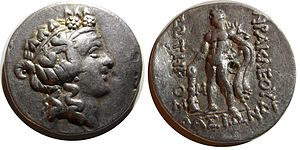 A tetradrachm from Roman controlled Macedonia. It was minted between 148 and 80 BC. Obverse shows Dionysos and reverse shows Herakles.

The reign of Augustus began a long period of peace, prosperity and wealth for Macedonia, although its importance in the economic standing of the Roman world diminished when compared to its neighbor, Asia Minor.

The economy was greatly stimulated by the construction of the Via Egnatia, the installation of Roman merchants in the cities, and the founding of Roman colonies. The Imperial government brought, along with its roads and administrative system, an economic boom, which benefited both the Roman ruling class and the lower classes. With vast arable and rich pastures, the great ruling families amassed huge fortunes in the society based on slave labor.

The Roman empire under Hadrian (ruled 117-38), showing the senatorial province of Macedonia' in southeastern Europe

The improvement of the living conditions of the productive classes brought about an increase in the number artisans and craftspeople to the region. Stonemasons, miners, blacksmiths, etc. were employed in every kind of commercial activity and craft. Greek people were also widely employed as tutors, educators and doctors throughout the Roman world.

The export economy was based essentially on agriculture and livestock, while iron, copper, and gold along with such products as timber, resin, pitch, hemp, flax and fish were also exported. Another source of wealth was the kingdom's ports, such as Dion, Pella, Thessalonica, Cassandreia.[15]

Ancient episcopal sees of the Roman province of Epirus Nova listed in the Annuario Pontificio as titular sees:[16]

Ancient episcopal sees of the Roman province of Epirus Vetus listed in the Annuario Pontificio as titular sees:[16]

Ancient episcopal sees of the Roman province of Macedonia Prima (I) listed in the Annuario Pontificio as titular sees:[16]

Ancient episcopal sees of the Roman province of Macedonia Secunda (II) listed in the Annuario Pontificio as titular sees:[16]

Ancient episcopal sees of the Roman province of Thessalia Prima (I) listed in the Annuario Pontificio as titular sees:[16]

Ancient episcopal sees of the Roman province of Thessalia Secunda (II) listed in the Annuario Pontificio as titular sees:[16]