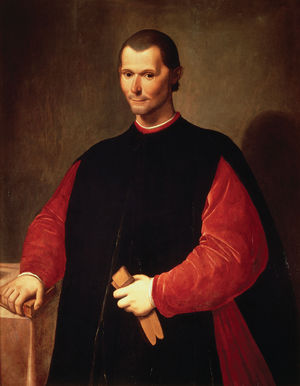 Machiavellianism is "the employment of cunning and duplicity in statecraft or in general conduct".[1] The word comes from the Italian Renaissance diplomat and writer Niccolò Machiavelli, who wrote Il Principe (The Prince), among other works.

In modern psychology, Machiavellianism is one of the dark triad personalities, characterized by a duplicitous interpersonal style, a cynical disregard for morality and a focus on self-interest and personal gain.[2]

In the 16th century, immediately following the publication of The Prince, Machiavellianism was seen as a foreign plague infecting northern European politics, originating in Italy, and having first infected France. It was in this context that the St. Bartholomew's Day massacre of 1572 in Paris came to be seen as a product of Machiavellianism, a view greatly influenced by the Huguenot Innocent Gentillet, who published his Discours contre Machievel in 1576, which was printed in ten editions in three languages over the next four years.[3] Gentillet held, quite wrongly according to Sydney Anglo, that Machiavelli's "books [were] held most dear and precious by our Italian and Italionized [sic] courtiers" in France (in the words of his first English translation), and so (in Anglo's paraphrase) "at the root of France's present degradation, which has culminated not only in the St Bartholemew massacre but the glee of its perverted admirers".[4] In fact there is little trace of Machiavelli in French writings before the massacre, not that politicians telegraph their intentions in writing, until Gentillet's own book, but this concept was seized upon by many contemporaries, and played a crucial part in setting the long-lasting popular concept of Machiavellianism.[5]

I can add colours to the chameleon,
Change shapes with Proteus for advantages,
And set the murderous Machiavel to school.

In The Jew of Malta (1589–90) "Machievel" in person speaks the Prologue, claiming not to be dead, but to have possessed the soul of (the Duke of) Guise, "And, now the Guise is dead, is come from France/ To view this land, and frolic with his friends" (Prologue, lines 3–4)[6] Marlowe's last play, The Massacre at Paris (1593) takes the massacre, and the following years, as its subject, with the Duke of Guise and Catherine de' Medici both depicted as Machiavellian plotters, bent on evil from the start.

The Anti-Machiavel is an 18th-century essay by Frederick the Great, King of Prussia and patron of Voltaire, rebutting The Prince, and Machiavellianism. It was first published in September 1740, a few months after Frederick became king, and is one of many such works.

Denis Diderot, the French philosopher, viewed Machiavellianism as "an abhorrent type of politics" and the "art of tyranny."[7]

Machiavellianism is also a term that some social and personality psychologists use to describe a person's tendency to be unemotional, and therefore able to detach him or herself from conventional morality and hence to deceive and manipulate others. In the 1960s, Richard Christie and Florence L. Geis developed a test for measuring a person's level of Machiavellianism (sometimes referred to as the Machiavelli test).[8] Their Mach - IV test, a twenty-statement personality survey, became the standard self-assessment tool of Machiavellianism. People scoring high on the scale (high Machs) tend to endorse statements such as, "Never tell anyone the real reason you did something unless it is useful to do so," (No. 1) but not ones like, "Most people are basically good and kind" (No. 4), "There is no excuse for lying to someone else," (No. 7) or "Most people who get ahead in the world lead clean, moral lives" (No. 11). Using their scale, Christie and Geis conducted multiple experimental tests that showed that the interpersonal strategies and behavior of "High Machs" and "Low Machs" differ.[9] Their basic results have been widely replicated.[10] Measured on the Mach - IV scale, males are, on average, slightly more Machiavellian than females.[9][11]

A 1992 review described Machiavellian motivation as related to cold selfishness and pure instrumentality, and those high on the trait were assumed to pursue their motives (e.g. sex, achievement, sociality) in duplicitous ways. More recent research on the motivations of high Machs compared to low Machs found that they gave high priority to money, power, and competition and relatively low priority to community building, self-love, and family concerns. High Machs admitted to focusing on unmitigated achievement and winning at any cost.[2]

Due to their skill at interpersonal manipulation, there has often been an assumption that high Machs possess superior intelligence, or ability to understand other people in social situations. However, research has firmly established that Machiavellianism is unrelated to IQ. Furthermore, studies on emotional intelligence have found that high Machiavellianism actually tends to be associated with low emotional intelligence as assessed by both performance and questionnaire measures. Both empathy and emotion recognition have been shown to have negative correlations with Machiavellianism. Additionally, research has shown that Machiavellianism is unrelated to a more advanced theory of mind, that is, the ability to anticipate what others are thinking in social situations. If high Machs actually are skilled at manipulating others this appears to be unrelated to any special cognitive abilities as such.[2]

Relations with other personality traits

In 2002, the Machiavellianism scale of Christie and Geis was applied by behavioral game theorists Anna Gunnthorsdottir, Kevin McCabe and Vernon L. Smith[11] in their search for explanations for the spread of observed behavior in experimental games, in particular individual choices which do not correspond to assumptions of material self-interest captured by the standard Nash equilibrium prediction. It was found that in a trust game, those with high MACH-IV scores tended to follow homo economicus' equilibrium strategies while those with low MACH-IV scores tended to deviate from the equilibrium, and instead made choices that reflected widely accepted moral standards and social preferences.

Main article: Machiavellianism in the workplace

Machiavellianism in the workplace is the employment of cunning and duplicity in a business setting. It is an increasingly studied phenomenon. The root of the concept of Machiavellianism is the book The Prince by Machiavelli which lays out advice to rulers how to govern their subjects. Machiavellianism has been studied extensively over the past 40 years as a personality characteristic that shares features with manipulative leadership tactics. It has in recent times been adapted and applied to the context of the workplace and organizations by many writers and academics. The Machiavellian typically only manipulates on occasions where it is necessary to achieve the required objectives.[14]

Oliver James identifies Machiavellianism as one of the dark triadic personality traits in the workplace, the others being narcissism and psychopathy.[15]

A new model of Machiavellianism based in organizational settings consists of three factors:[14]

The presence of Machiavellianism in an organisation has been positively correlated with counterproductive workplace behaviour and workplace deviance.[14]