A machine head (also referred to as a tuning machine, tuner, or gear head) is a geared apparatus for tuning stringed musical instruments by adjusting string tension. Machine heads are used on mandolins, guitars, double basses etc., and are usually located on the instrument's headstock. Non-geared tuning devices that are used on violins, violas, cellos, lutes, older Flamenco guitars, ukuleles etc., are known as friction pegs. Friction pegs hold the string in tune by way of friction caused by their tapered shape and by the string pull created by the tight string. Some other commonly used slang names for guitar tuners are pegs, gears, machines, cranks, knobs, tensioners and tighteners. 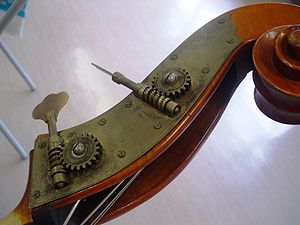 Machine heads on a double bass

Traditionally, a single machine head consists of a cylinder or capstan, mounted at the center of a pinion gear, a knob or "button" and a worm gear that links them. The capstan has a hole through the far end from the gear, and the string is made to go through that hole, and is wrapped around the capstan. To complete the string installation, the string is tightened by turning the capstan using the tuning knob. The worm gear ensures that the capstan cannot turn without a movement on the knob; it also allows precise tuning.

Banjos usually employ a different mechanism using planetary gears - in this case the knob and the capstan both rotate on the same axis. A few guitars (e.g. the original Gibson Firebird, early Gibson basses and Mario Maccaferri's plastic instruments) have used this design.

The guitarist adjusts the tension of the various strings using the knobs so that they are correctly tuned: a higher tension yields a sharper pitch, a lower tension a flatter pitch. Typical tensions for steel-string acoustic guitars with "light" tension strings are 10.5 kgf (23.3 lbf, 103 N) to 13.8 kgf (30.2 lbf, 135 N). 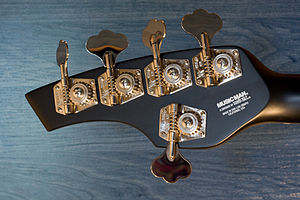 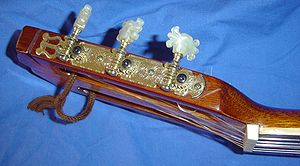 The machine heads on a classical guitar. Note the exposed gears and the decorations. 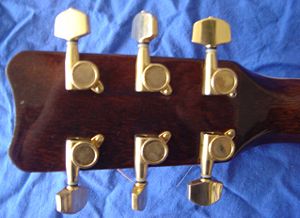 The reverse of the machine heads on a "folk" steel-string acoustic guitar. Note the enclosed gears.

Since the 1950s, guitar performance techniques evolved, and aggressive usage of a vibrato bar ("tremolo") became widespread. However, the original machine heads couldn't withstand the rigors of constant string tension changing, and strings could go out of tune after using a vibrato mechanism several times. Several manufacturers, including Grover and Floyd Rose, introduced a new design, commonly named locking machine heads nowadays: a machine head with additional mechanism to lock it in place and stabilize tuning while playing and using a vibrato bar. However, such machine heads reached limited success, mostly because of their price: as of 2006[update], locking ones are about 50% more expensive than original. Many break strings when tension is increased while the mechanism is locked and later unlocked, which frequently happens in music stores.

Note that on some guitars, such as those with Floyd Rose bridge, string tuning may be also conducted using microtuning tuners located at guitar bridge. In this case, main machine heads at headstock may be missing entirely, as well as the headstock itself.

Likewise, 'headless' guitars and basses, notably those designed by Steinberger and their licensed imitations, such as the Hohner Jack Bass, and unlicensed imitations such as the Washburn Bantam, have the machine heads at the body end. Steinbergers and Hohners require specialist double-ball end strings, whereas the Washburn Bantam can take regular strings. 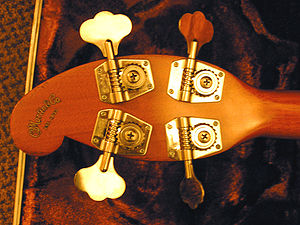 Several manufacturers established well-known designs of knobs and whole machine heads. These designs are subject to copy and reference:

There are several US patents on machine heads, mostly covering various aspects of locking: