From Infogalactic: the planetary knowledge core
(Redirected from Machtergreifung)
Jump to: navigation, search
This article is about the culmination of the rise of Nazism. For the antecedent years, see Rise of Nazism.

The Nazi seizure of power (German: Machtergreifung) refers to the acquisition by Adolf Hitler and the National Socialist German Workers' Party (Nazi Party) of the chancellorship of Germany, and of several other high-ranking cabinet posts, on 30 January 1933, following the appointment of Hitler as chancellor by the aged President Paul von Hindenburg, then 84. It also refers to the period of consolidation of Nazi power through intimidation and violence, culminating in the establishment of the Nazi Party as the only legal political party in Germany in July 1933. 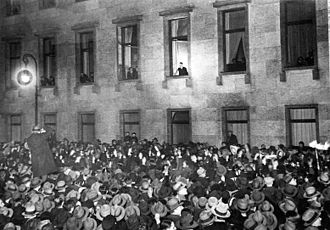 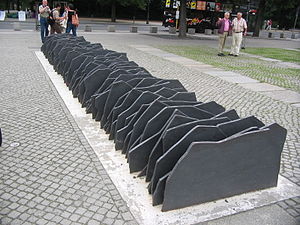 Memorial to the Murdered Members of the Reichstag at the Reichstag building. Each slate plate corresponds to one of 96 Reichstag members murdered by the Nazis

The Nazis had learned from the failed Beer Hall Putsch of 9 November 1923, whereafter Hitler's lawyer and adviser Hans Frank developed a Legalitätsstrategie ("legality strategy") for the "National Revolution" to formally and avowedly observe the law on the way to government takeover. After the huge success of the Nazi Party in the 1930 elections, the government of Chancellor Heinrich Brüning (Centre Party) tried to keep the state and constitution alive through a minority government supported by the Social Democrats, ruling by Article 48 emergency decrees. He pushed through a law proscribing the Nazi SA and SS paramilitary organizations, which had to be revoked in 1932 after pressure from right-wing forces around President Hindenburg and Defense Minister Kurt von Schleicher.

From an economic perspective, Brüning caused increased mass unemployment through his rigid austerity program of public budget balancing. On 1 June 1932 President Hindenburg, urged by Schleicher, appointed as chancellor his right-wing confidant Franz von Papen, who strove for collaboration with the Nazis in order to use their popularity with the masses for himself. A coalition between the Centre Party, the national conservative German National People's Party (DNVP), and the Nazis only failed because of Hitler's demand for chancellorship. Since Papen had courted the Nazis, he did not forbid the NSDAP as a seditious party, though the Boxheimer Dokumente written by Werner Best and leaked to the Hesse State Police in 1931 revealed plans for another putsch by the Nazis and could have given rise to stern measures. Instead Papen and Hindenburg instigated a coup against the Prussian state government, the Preußenschlag deposing the democratic state government under Minister-President Otto Braun, who was succeeded by Papen as a Reichskommissar.

In the German federal election of July 1932, the Nazi Party gained the largest number of seats in the Reichstag. After all of Papen's attempts to reach a coalition government had failed, federal elections were again held in November 1932, with the Nazis facing some losses but without any chance for Papen to reach a majority. He finally resigned, and though twenty representatives of industry, finance, and agriculture had signed the Industrielleneingabe, a petition requesting that Hindenburg make Hitler chancellor, on 2 December the president appointed Minister Schleicher. The new chancellor tried to gain the support of an anti-democratic Third Position alliance of DNVP and Nazis led by Gregor Strasser, along with national conservative pressure groups like Der Stahlhelm, referring to the joint efforts during the referendum of 1929 or the Harzburg Front of 1931. However these plans failed, and behind his back on 4 January 1933, Hitler met Papen, who agreed to join a Hitler Cabinet as vice-chancellor. Along with State Secretary Otto Meissner and Hindenburg's son Oskar, Papen could finally persuade the reluctant president to appoint Hitler. Papen and DNVP chairman Alfred Hugenberg trusted Hindenburg, who was able to depose the chancellor if necessary, and they were reassured by the fact that only two ministers in Hitler's cabinet, Hermann Göring and Wilhelm Frick, were Nazi Party members.