Macrobius Ambrosius Theodosius, commonly referred to as Macrobius, was a Roman who flourished during the early fifth century. He is primarily known for his writings, which include the Saturnalia, a compendium of ancient Roman religious and antiquarian lore, the Commentarii in Somnium Scipionis ("Commentary on the Dream of Scipio"), which was an important source for Platonism in the Latin West during the Middle Ages, and De differentiis et societatibus graeci latinique verbi ("On the Differences and Similarities of the Greek and Latin Verb") which is now lost.

The correct order of his names is "Macrobius Ambrosius Theodosius", which is how it appears in the earliest manuscripts of the Saturnalia, and how he is addressed in the excerpts from his lost De differentiis. Only in later manuscripts were his names reversed as "Ambrosius Theodosius Macrobius", which James Willis then adopted for his edition of the Commentary. Alan Cameron notes that Cassiodorus and Boethius both refer to him as "Macrobius Theodosius", while he was known during his lifetime as "Theodosius": the dedication to the De differentiis is addressed Theodosius Symmacho suo ("Theodosius to his Symmachus"), and by the dedicatory epistle to Avianus's Fables, where he is addressed as Theodosi optime.[1] 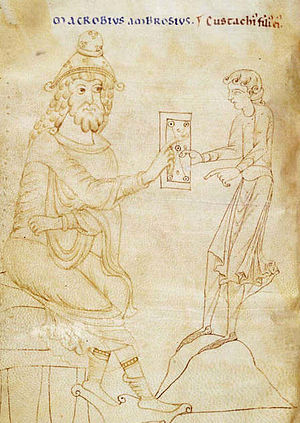 Macrobius presenting his work to his son Eustachius. From an 1100 copy of Macrobius' Dream of Scipio.

Little is known for certain about Macrobius, but there are many theories and speculations about him. He states at the beginning of his Saturnalia that he was "born under a foreign sky" (sub alio ortos caelo), and both of his major works are dedicated to his son, Eustachius.[2] His major works have led experts to assume that he was a pagan.

Which "foreign sky" Macrobius was born under has been the subject of much speculations. T. R. Glover considers Macrobius either an ethnic Greek, or born in one of the Greek-speaking parts of the Roman Empire, such as Egypt, due to his intimate knowledge of Greek literature. J. E. Sandys went further and argued that Macrobius was born in one of the Greek provinces. However other experts, beginning with Ludwig van Jan, point out that despite his familiarity with Greek literature Macrobius was far more familiar with Latin than Greek—as evidenced by his enthusiasm for Vergil and Cicero—and favor North Africa, which was part of the Latin-speaking portion of the Roman Empire.[3]

Scholars have attempted to identify him with a Macrobius who is mentioned in the Codex Theodosianus as a praetorian prefect of Spain (399–400), and a proconsul of Africa (410).[4] The Codex Theodosianus also records a praepositus (or lord chamberlain) named Macrobius in 422.[5] A number of older authorities go so far as to identify Macrobius the author with the first, and date his floruit to 399–410. There are objections to either identification: as Alan Cameron notes, the complete name of the first candidate is attested in an inscription to be "Flavius Macrobius Maximianus", while the second is excluded because "A praepositus must at this period have been a eunuch."[6]

However, since Macrobius is frequently referred to as vir clarissimus et inlustris, a title which was achieved by holding public office, we can reasonably expect his name to appear in the Codex Theodosianus. Further, Cameron points out that during his lifetime Macrobius was referred to as "Theodosius", and looking for that name Cameron found a Theodosius who was praetorian prefect of Italy in 430. "It is significant that the only surviving law addressed to this Theodosius sanctions a privilege for Africa Proconsularis on the basis of information received concerning Byzacena," Cameron notes.[7] 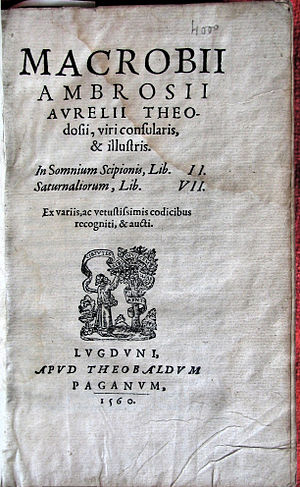 The most important of Macrobius' works is the Saturnalia, containing an account of the discussions held at the house of Vettius Agorius Praetextatus during the holiday of the Saturnalia. It contains a great variety of curious historical, mythological, critical, antiquarian and grammatical discussions. "The work takes the form of a series of dialogues among learned men at a fictional banquet."[8] There is little attempt to give any dramatic character to the dialogue; in each book some one of the personages takes the leading part, and the remarks of the others serve only as occasions for calling forth fresh displays of erudition.

The first book is devoted to an inquiry as to the origin of the Saturnalia and the festivals of Janus, which leads to a history and discussion of the Roman calendar, and to an attempt to derive all forms of worship from that of the Sun. The second book begins with a collection of bons mots, to which all present make their contributions, many of them being ascribed to Cicero and Augustus; a discussion of various pleasures, especially of the senses, then seems to have taken place, but almost the whole of this is lost. The third, fourth, fifth and sixth books are devoted to Virgil, dwelling respectively on his learning in religious matters, his rhetorical skill, his debt to Homer (with a comparison of the art of the two) and to other Greek writers, and the nature and extent of his borrowings from the earlier Latin poets. The latter part of the third book is taken up with a dissertation upon luxury and the sumptuary laws intended to check it, which is probably a dislocated portion of the second book. The seventh book consists largely of the discussion of various physiological questions.

The primary value of the work lies in the facts and opinions quoted from earlier writers. The form of the Saturnalia is copied from Plato's Symposium and Gellius's Noctes atticae; the chief authorities (whose names, however, are not quoted) are Gellius, Seneca the philosopher, Plutarch (Quaestiones conviviales), Athenaeus and the commentaries of Servius and others on Virgil.

Commentary on the "Dream of Scipio"

Macrobius is also the author of a commentary in two books on the Dream of Scipio narrated by Cicero at the end of his Republic. The nature of the dream, in which the elder Scipio appears to his (adopted) grandson, and describes the life of the good after death and the constitution of the universe from a Stoic and Neo-Platonic point of view, gave occasion for Macrobius to discourse upon the nature of the cosmos, transmitting much classical philosophy to the later Middle Ages. In astronomy, this work is noted for giving the diameter of the Sun as twice the diameter of the Earth.[9] Of a third work On the Differences and Similarities of the Greek and Latin Verb, we only possess an abstract by a certain Johannes, doubtfully identified with Johannes Scotus Eriugena (9th century).

Cicero's Dream of Scipio described the Earth as a globe of insignificant size in comparison to the remainder of the cosmos.[10] Many early medieval manuscripts of Macrobius include maps of the Earth, including the antipodes, zonal maps showing the Ptolemaic climates derived from the concept of a spherical Earth and a diagram showing the Earth (labeled as globus terrae, the sphere of the Earth) at the center of the hierarchically ordered planetary spheres.[11] (See also: flat Earth).

A prominent lunar crater is named after Macrobius.[12]

Macrobius Cove in Antarctica is named after Macrobius.