From Infogalactic: the planetary knowledge core
(Redirected from Macromolecules)
Jump to: navigation, search
For the scientific journal, see Macromolecules (journal). 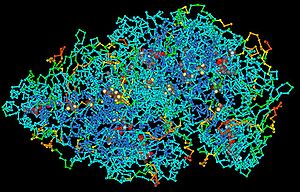 Chemical structure of a polypeptide macromolecule

A macromolecule is a very large molecule commonly created by polymerization of smaller subunits (monomers). They are typically composed of thousands or more atoms. The most common macromolecules in biochemistry are biopolymers (nucleic acids, proteins, carbohydrates and polyphenols) and large non-polymeric molecules (such as lipids and macrocycles).[1] Synthetic macromolecules include common plastics and synthetic fibres as well as experimental materials such as carbon nanotubes.[2][3]

1. In many cases, especially for synthetic polymers, a molecule can be regarded
as having a high relative molecular mass if the addition or removal of one or a
few of the units has a negligible effect on the molecular properties. This statement
fails in the case of certain macromolecules for which the properties may be
critically dependent on fine details of the molecular structure.
2. If a part or the whole of the molecule fits into this definition, it may be described
as either macromolecular or polymeric, or by polymer used adjectivally.[4]

The term macromolecule (macro- + molecule) was coined by Nobel laureate Hermann Staudinger in the 1920s, although his first relevant publication on this field only mentions high molecular compounds (in excess of 1,000 atoms).[5] At that time the phrase polymer, as introduced by Berzelius in 1833, had a different meaning from that of today: it simply was another form of isomerism for example with benzene and acetylene and had little to do with size.[6]

Usage of the term to describe large molecules varies among the disciplines. For example, while biology refers to macromolecules as the four large molecules comprising living things, in chemistry, the term may refer to aggregates of two or more molecules held together by intermolecular forces rather than covalent bonds but which do not readily dissociate.[7]

According to the standard IUPAC definition, the term macromolecule as used in polymer science refers only to a single molecule. For example,a single polymeric molecule is appropriately described as a "macromolecule" or "polymer molecule" rather than a "polymer", which suggests a substance composed of macromolecules.[8]

Macromolecules often have unusual physical properties that do not occur for smaller molecules.

For example, DNA in a solution can be broken simply by sucking the solution through an ordinary straw because the physical forces on the molecule can overcome the strength of its covalent bonds. The 1964 edition of Linus Pauling's College Chemistry asserted that DNA in nature is never longer than about 5,000 base pairs.[10] This error arose because biochemists were inadvertently breaking their samples into fragments. In fact, the DNA of chromosomes can be hundreds of millions of base pairs long, packaged into chromatin.

Another common macromolecular property that does not characterize smaller molecules is their relative insolubility in water and similar solvents, instead forming colloids. Many require salts or particular ions to dissolve in water. Similarly, many proteins will denature if the solute concentration of their solution is too high or too low.

All living organisms are dependent on three essential biopolymers for their biological functions: DNA, RNA and Proteins.[12] Each of these molecules is required for life since each plays a distinct, indispensable role in the cell.[13] The simple summary is that DNA makes RNA, and then RNA makes proteins.

DNA, RNA and proteins all consist of a repeating structure of related building blocks (nucleotides in the case of DNA and RNA, amino acids in the case of proteins). In general, they are all unbranched polymers, and so can be represented in the form of a string. Indeed, they can be viewed as a string of beads, with each bead representing a single nucleotide or amino acid monomer linked together through covalent chemical bonds into a very long chain.

In most cases, the monomers within the chain have a strong propensity to interact with other amino acids or nucleotides. In DNA and RNA, this can take the form of Watson-Crick base pairs (G-C and A-T or A-U), although many more complicated interactions can and do occur.

In contrast, both RNA and proteins are normally single-stranded. Therefore, they are not constrained by the regular geometry of the DNA double helix, and so fold into complex three-dimensional shapes dependent on their sequence. These different shapes are responsible for many of the common properties of RNA and proteins, including the formation of specific binding pockets, and the ability to catalyse biochemical reactions.

DNA is optimised for encoding information

DNA is an information storage macromolecule that encodes the complete set of instructions (the genome) that are required to assemble, maintain, and reproduce every living organism.[14]

DNA has three primary attributes that allow it to be far better than RNA at encoding genetic information. First, it is normally double-stranded, so that there are a minimum of two copies of the information encoding each gene in every cell. Second, DNA has a much greater stability against breakdown than does RNA, an attribute primarily associated with the absence of the 2'-hydroxyl group within every nucleotide of DNA. Third, highly sophisticated DNA surveillance and repair systems are present which monitor damage to the DNA and repair the sequence when necessary. Analogous systems have not evolved for repairing damaged RNA molecules. Consequently, chromosomes can contain many billions of atoms, arranged in a specific chemical structure.

Proteins are optimised for catalysis

Proteins are functional macromolecules responsible for catalysing the biochemical reactions that sustain life.[1]:3 Proteins carry out all functions of an organism, for example photosynthesis, neural function, vision, and movement.[15]

The single-stranded nature of protein molecules, together with their composition of 20 or more different amino acid building blocks, allows them to fold in to a vast number of different three-dimensional shapes, while providing binding pockets through which they can specifically interact with all manner of molecules. In addition, the chemical diversity of the different amino acids, together with different chemical environments afforded by local 3D structure, enables many proteins to act as Enzymes, catalyzing a wide range of specific biochemical transformations within cells. In addition, proteins have evolved the ability to bind a wide range of cofactors and Coenzymes, smaller molecules that can endow the protein with specific activities beyond those associated with the polypeptide chain alone.

RNA is multifunctional, its primary function is to encode proteins, according to the instructions within a cell’s DNA.[1]:5 They control and regulate many aspects of protein synthesis in eukaryotes.

RNA encodes genetic information that can be translated into the amino acid sequence of proteins, as evidenced by the messenger RNA molecules present within every cell, and the RNA genomes of a large number of viruses. The single-stranded nature of RNA, together with tendency for rapid breakdown and a lack of repair systems means that RNA is not so well suited for the long-term storage of genetic information as is DNA.

In addition, RNA is a single-stranded polymer that can, like proteins, fold into a very large number of three-dimensional structures. Some of these structures provide binding sites for other molecules and chemically-active centers that can catalyze specific chemical reactions on those bound molecules. The limited number of different building blocks of RNA (4 nucleotides vs >20 amino acids in proteins), together with their lack of chemical diversity, results in catalytic RNA (ribozymes) being generally less-effective catalysts than proteins for most biological reactions.

Polyphenols consist of a branched structure of multiple phenolic subunits. They can perform structural roles (e.g. lignin) as well as roles as secondary metabolites involved in signalling, pigmentation and defense. 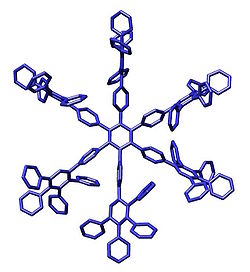