Macroom (/mə.ˈkruːm/; Irish: Maigh Chromtha) is a market town and civil parish in the barony of Muskerry West, County Cork, Ireland. It is situated in a valley of the River Sullane, about halfway between Cork city and Killarney. The name in Irish Gaelic may mean "meeting place of followers of the god Crom" or "crooked oak",[1] the latter a reference to a large oak tree that grew in the town-square during the reign of King John.[2] The town grew around the building of the castle by the Carew family around the same time.

The area was at one time a meeting place for the Druids of Munster, and is first mentioned in 6th century records. It was the site of a major battle c 1014 involving Brian Boru. In the following centuries Macroom was invaded by a succession of warring clans, including the Murcheatach Uí Briain and Richard de Cogan families; they built a series of tower houses around the area, many of which survive. In the 17th century the MacCarthy family won control and led Macroom towards prosperity through milling, markets and fairs. This fortune was short lived and followed by the Williamite wars of the 1690s when authority over the town castle waxed and waned between the Irish MacCarthy's and a number of ambitious English families. Later Macroom became a centre point of conflict in the Cromwellian conquest of Ireland.

The population was decimated in the 1840s by famine and emigration, the former evidenced by the remains of a workhouse, now the district hospital, and a mass graveyard to the west, near Clondrohid. During the 19th century a number of Anglo-Irish families settled in the area but many of their estate houses were burned out by rebels during and after the Irish War of Independence as the town was caught up in a turmoil of IRA activity. Eventually the Anglo-Irish families fled, leaving behind tracts of land that were, in the end, distributed among the wealthier of their former tenants.

Traditionally Macroom is known as "the town that never reared a fool."[3][4] The broader urban area recorded a population of 3,553 in the 2006 national census. In 1977 it hosted the Mountain Dew festival, with Rory Gallagher, Thin Lizzy and Van Morrison as the main attractions. The post-Sex Pistols John Lyndon was in attendance.

The region's Iron Age pre-history survives through ancient burial monuments; the area is unusually rich with standing stones, dolmens and stone circles.[5] Macroom seems to have been a centre for Bardic conventions and a base for the Druids of Munster.[6]

File:Knocknakilla4.jpg
The area around Macroom contains many records from pre-history and is perhaps one of the richest areas in the world in terms of Stone Age megaliths. This standing stone is part of a 3500-year-old complex in Knocknakilla between Macroom and Millstreet.

The first historical reference to Macroom dates from the 6th century, when the townland was known as Achad Dorbchon and held within the kingdom of Muscraighe Mitine.[7] The Eóganachtas were then the dominant clan of Munster; they held kingdoms from Muscraighe Mitine to the midlands town of Birr. At some point they were replaced by the Uí Floinn, who commissioned a castle in Macroom so as to establish Raithleann as capital of Muskerry.

Muscraighe Mitine underwent three invasions during the 13th century. The Murcheatach Uí Briain and Richard de Cogan arrived in 1201 and 1207 respectively; the MacCarthys became the dominant and most powerful family and held Macroom Castle until the mid-17th century.[8] 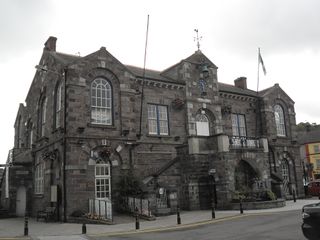 Macroom Town Hall was built for £1,000 in 1900 on premises purchased from Lady Ardilaun two years before. The first phase of work on the building was completed in 1904.[9]

From the 14th century, Macroom became the capital of the Barony of Muskerry and the centre for trade, burial and religious worship. It was one of the earliest Irish milling centres, and from the end of the 16th century the town grew from a village to a functionally diverse urban centre. The locality grew outwards from the castle. The MacCarthys established the town as a centre for markets and fairs, and in 1620 a market house was built to the east of and facing the castle. The family introduced a plantation scheme which aimed to attract new agriculture and industrial techniques and methods to the area. By the mid-17th century English families owned approximately one-third of the town in value terms.[10] The Protestant families introduced butter making to the town, an industry that was labour-intensive and had a positive effect on local dairy farming. 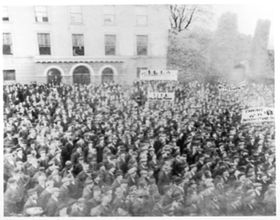 c. 1894 mass meeting, organised by the ILLA supported by small tenant farmers and agrarian labourers in the Market Square

The 1650 battle of Macroom was waged as part of the Cromwellian conquest of Ireland, when an English Parliamentarian force under Roger Boyle defeated an Irish Confederate force under David Roche. Bishop Boetius MacEgan, fighting on behalf of the MacCarthys, failed to hold the castle and was taken prisoner by the Cromwellian forces and hanged at Carrigadrohid.[11]

A 1750 tenement list details 134 buildings and 300 families, with a population ratio of 6 to 1 between Catholic and Protestants. The town had developed from a locality of mud cabins in the early 1660s to a linear shaped urban settlement of mainly thatched cabins, which were later replaced by solid cottages following a campaign by the Irish Land and Labour Association (ILLA).

Macroom Castle was for a period controlled by Admiral Sir William Penn, a British Admiral and father of William Penn, after whom the state of Pennsylvania is named. Penn spent time in his father's Irish home, particularly during his childhood. 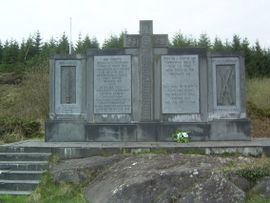 Monument at the site of the Kilmichael Ambush

Macroom was the main base in Cork for the British Auxiliary Division during the 1919–1921 Irish War of Independence. The Irish Republican Army was highly active in the county, especially in the areas around Macroom, Bandon and Dunmanway. Royal Irish Constabulary police in the town described the area as "practically in a state of war". After a series of burnings of local police barracks and courthouses[12] a curfew was imposed on the town, with a ban on public meetings and market fairs. A local IRA member wrote of a "hinterland unpoliced and unwatched". The local police felt they had lost control and the Auxiliaries were called in. The local townspeople treated them with hostility, and there were instances of patrols being stoned. They quickly found themselves embroiled in a guerrilla battle in the Muskerry hills, coming under fire from the Ballyvourney IRA cell, and lost three men – two of them officers – in one attack.[13]

In 1920 at Kilmichael, on the road between Macroom and Dunmanway, 17 members of the Macroom Auxiliary "C Company" were ambushed and killed by a local IRA cell led by the prominent general Tom Barry. In the aftermath of the attack, the British military were given the power to execute anyone found carrying arms and ammunition, to search houses, impose curfews, try suspects in military rather than civilian courts and to intern suspects without trial. On 11 December, in reprisal, the centre of Cork city was burned by Auxiliaries, British soldiers and Black and Tans.[14] 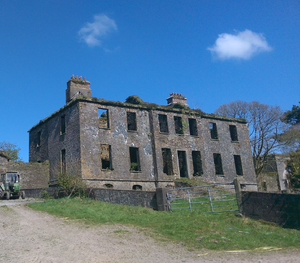 Ruined home of the Cork branch of the Massey family, burned during the War of Independence

Macroom Castle was burned out on five separate occasions; the last occasion was on 18 August 1922 following the evacuation of British Auxiliaries from the town. Members of anti-treaty forces, including Erskine Childers and Frank O'Connor, retreated from Cork City to Macroom, burning the castle before leaving.

The Massey home is located north by Kilnagurteen and gave the areas of Masseytown and Mount Massey their names. They family were major landowners in the 19th century with land covering 13,363 acres and extending from Clondrohid to Drishane. Later the home acted as was an auxiliary workhouse. It was laid siege and eventually burned in December 1920, during the War of Independence.[15]

The revolutionary leader Michael Collins was killed in 1922 in an ambush near Béal na Bláth. Lady Olivia Ardilaun, a descendant of the McCarthy's, and widow of Lord Ardilaun, sold the castle demesne in 1924[16] to a group of local businessmen, to be held in trust for the people of the town.

Macroom was built on the River Sullane, a tributary of the River Lee. Its hinterland is lies on a valley at the foot of the Boggeragh Mountains. The town stretches for about 2 miles (3.2 km) and largely consists of two long streets, Main Street and New Street, divided by the Ten Arch Bridge, which also leads off to the suburb of Massey Town, further towards the village of Ballinagree and the Boggeragh Mountains. Until the 1950s New Street was an economic hub, with many small retail outlets. It declined as family shops lost ground in favour of supemarkets.

The Gearagh, a submerged oakwood forest 2km east of the town

The Gearagh, a national nature reserve on an inland delta, is located 1.5 kilometres (0.93 mi) south of Macroom. It comprises a series of small islands, separated by anastomosing, mostly flat, river channels or streams,[17] and is bounded by Toon Bridge, Illaunmore, and Anahala Bridge. The area is thought to have been wooded since the end of the last Ice Age c. 8,000 bc.[18] The alluvial woodland extended as far as the Lee Bridge, and consisted of a large number of mature oak and ash trees.[19] The reserve was gutted in 1954 when the Lee hydro-electric scheme led to extensive tree-felling and flooding. Now submerged houses are visible from the area around Two Mile Bridge. The scheme resulted in the loss of sixty percent of the former oak woodland.[18] Today, the Gearagh is of interest and importance due to its rich and rare diversity of wildlife, and represents the only extant extensive alluvial woodland in Western Europe.[20] 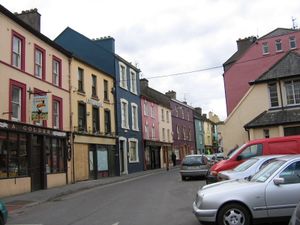 View of the back square, showing the late Gerard Golden's pub; "the pub that never served a fool"

Tourist attractions include the town centre, an 18-hole golf course, and the Castle Grounds, with fishing and golfing grounds. The town's surroundings contain large amounts of megalithic monuments, early Christian holy wells, churches and sacred sites associated with ancient visionaries and healers. Mushera Mountain is located a few kilometres to the north of the town, near Millstreet Country Park. It contains the ancient Saint John's Well. Carrigaphooca Castle, really a tower house, is 6 km west of the town, but no longer accessible to the public.

The Castle Arch, a centerpiece of the old castle grounds, admits walkers to the demesne parklands. It is still held in trust as a gift to, and possession of, the people of Macroom. This large park contains riverside walks among mature oak and beech trees. In early October it becomes an area of keen interest to mushroom enthusiasts. Macroom Oatmeal is milled here by the traditional stone-grinding process at Walton's Mill. 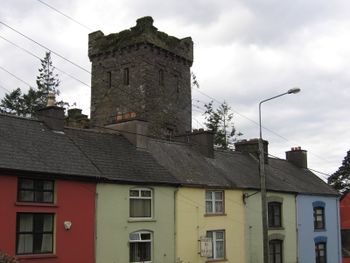 Macroom is on the national primary route N22, approximately 38 km from Cork city and 48 km from Killarney. The nearest airport is Cork Airport.

A railway ran between the town and Cork city from 1866 to 1953, terminating in the mart grounds. By 1890 there were five services each way on week days and two on Sundays, with the running time taking just over an hour. Macroom railway station opened on 12 May 1866; it closed for passenger traffic on 1 July 1935 and for goods traffic on 10 March 1947, and was finally shut down on 1 December 1953.[21]

The Convent of Mercy Secondary School is situated within the Sisters of Mercy's complex attached to St. Colmans Church, which also includes a convent, primary school, graveyard and grotto. Coláiste De La Salle was opened in 1933 and originally located in the town hall, until a permanent building was completed three years later. By the late 1970s the school was experiencing severe capacity issues and a re-structure and extension of the school was undertaken in 1982.[22] Since its opening the ratio of pupils has remained relatively stable with 40% coming the town and the rest from surrounding parishes. A new building was built in 2008 for St Colman's Boys National School after years of planning applications and appeals.