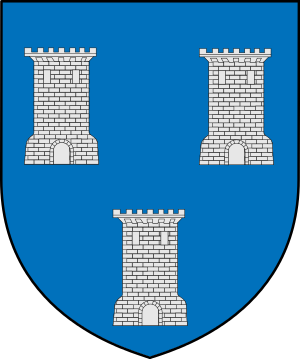 Jeanne Antoinette Poisson, Marquise de Pompadour, also known as Madame de Pompadour (29 December 1721 – 15 April 1764, French pronunciation: ​[pɔ̃.pa.duːʁ]), was a member of the French court and was the official chief mistress of Louis XV from 1745 to her death. She took charge of the king’s schedule and was a valued aide and advisor, despite her frail health and many political enemies. She secured titles of nobility for herself and her relatives, and built a network of clients and supporters. She was particularly careful not to alienate the Queen, Marie Leszczyńska. She was a major patron of architecture and decorative arts such as porcelain. She was a patron of the philosophes of the Enlightenment, including Voltaire. Hostile critics at the time generally tarred her as a malevolent political influence, but historians are more favourable, emphasizing her successes as a patron of the arts and a champion of French pride.[1]

Jeanne Antoinette Poisson, otherwise known as Reinette ("little queen") to her friends, was born on 29 December 1721 in Paris to François Poisson (1684–1754) and his wife Madeleine de La Motte (1699–1745). It is suspected that her biological father was either the rich financier Pâris de Montmartel or the tax collector (fermier général) Le Normant de Tournehem.[2] Le Normant de Tournehem became her legal guardian when François Poisson was forced to leave the country in 1725 after a scandal over a series of unpaid debts, a crime at that time punishable by death. (He was cleared eight years later and allowed to return to France.) Her younger brother was Abel-François Poisson de Vandières, who later became the Marquis de Marigny.

Poisson was intelligent, beautiful and refined. She spent her early childhood at the Ursuline convent in Poissy where she received a good education.[3] At adolescence, her mother took personal charge of her education at home by hiring tutors who taught her to recite entire plays by heart, play the clavichord, dance, sing, paint and engrave. She became an accomplished actress[3] and singer, and also attended Paris's Club de l'Entresol (formed in 1724 and suppressed in 1731). The greatest expense of her education was the employment of renowned singers and actors, such as Pierre Jélyotte, much of it paid for by Le Normant de Tournehem; and it may have been this in particular that sparked rumours of his paternity to Poisson.

She later said that, at the age of nine, her mother took her to a fortune teller who told her that she would one day reign over the heart of a king.[4]

At the age of nineteen, Jeanne Antoinette was married to Charles Guillaume Le Normant d'Étiolles, nephew of her guardian, who accepted the match and the large financial incentives that came with it. These included the estate at Étiolles (28 km south of Paris), a wedding gift from her guardian, which was situated on the edge of the royal hunting ground of the forest of Sénart. With her husband, she had two children, a boy who died a year after his birth in 1741 and Alexandrine-Jeanne (nicknamed "Fanfan"), born 10 August 1744.[3] Contemporary opinion supported by artwork from the time considered the young Mme d'Étiolles to be beautiful, with her small mouth and oval face enlivened by her wit. Her young husband was soon infatuated with her and she was celebrated in the fashionable world of Paris.[3] She founded her own salon, at Étiolles, and was joined by many philosophes, among them Voltaire. 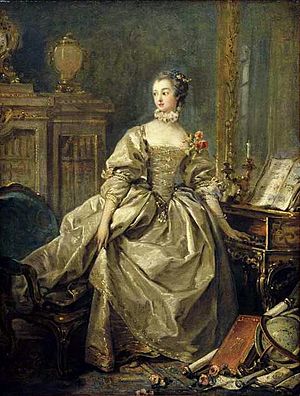 As Jeanne Antoinette became known in society, King Louis XV came to hear of her. In 1745, a group of courtiers, including her father-in-law, promoted her acquaintance with the monarch, who was still mourning the death of his third official mistress, the duchesse de Châteauroux.

Jeanne Antoinette was invited to a royal masked ball at the Palace of Versailles on the night of 25 to 26 February 1745, one of the many fêtes given to celebrate the marriage of the Dauphin Louis de France (1729–65) to the Infanta Maria Teresa of Spain (1726–46). By March, she was the king's mistress, installed at Versailles in an apartment directly above his.[5] On 7 May, the official separation between her and her husband was pronounced.[2]

To be presented at court, she required a title. The king purchased the marquisate of Pompadour on 24 June and gave the estate, with title and coat-of-arms, to Jeanne Antoinette, making her a Marquise.[2] On 14 September, she was formally introduced to the court by the king's cousin, the Princess de Conti. She quickly mastered the highly mannered court etiquette. Her mother died on Christmas Day of the same year, and did not live to see her daughter's achievement at becoming the undisputed royal mistress.

The Marquise de Pompadour had little formal political influence in France, but she wielded considerable power and control behind the scenes, which was highlighted when another of the king's mistresses, Marie-Louise O'Murphy de Boisfaily, "la belle Morphyse", attempted to replace her around 1754. In 1755, the younger and less experienced Morphyse was married off to an Auvergne nobleman, Jacques de Beaufranchet, seigneur d'Ayat (Lord of Ayat).[6]

The marquise had many enemies among the royal courtiers who felt it a disgrace that the king would thus compromise himself with a commoner. She was very sensitive to the unending libels called poissonnades, analogous to mazarinade against Cardinal Mazarin and a pun on her family name, Poisson, which means "fish" in French. Only with great reluctance did Louis take punitive action against her known enemies, such as Louis François Armand du Plessis, duc de Richelieu. 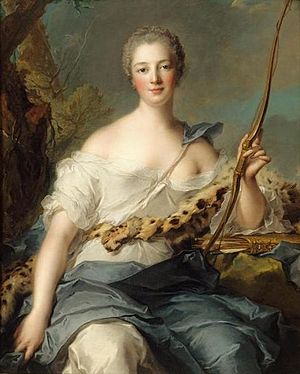 Her importance was such that she was approached in 1755 by Wenzel Anton Graf Kaunitz, a prominent Austrian diplomat, asking her to intervene in the negotiations which led to the Treaty of Versailles.[7] This was the beginning of the Diplomatic Revolution, which saw France allied to her former enemy Austria.

Under these changed alliances, the European powers entered the Seven Years' War, which saw France, Austria, and Russia pitted against Britain and Prussia. France suffered a defeat at the hands of the Prussians in the Battle of Rossbach in 1757, and eventually lost her American colonies to the British. After Rossbach, Madame de Pompadour is alleged to have comforted the king saying this now famous by-word: "au reste, après nous, le Déluge" ("Besides, after us, the Deluge").[8] France emerged from the war diminished and virtually bankrupt.

Madame de Pompadour persisted in her support of these policies, and when Cardinal de Bernis failed her, she brought Choiseul into office and supported and guided him in all his great plans: the Pacte de Famille, the suppression of the Jesuits and the Treaty of Paris (1763). Britain's victories in the war had allowed it to surpass France as the leading colonial power—something which was commonly blamed on Pompadour. Madame De Pompadour supported great ministers like Bertin and Machaut who introduced important fiscal and economic reforms (trade, infrastructure, income taxes) which made France the richest nation in the world.

There were several reasons for the Marquise de Pompadour’s lasting influence over Louis that distinguished her from past mistresses. First, she decidedly established a cordial relationship with Marie Leszczyńska.[9] The king’s previous mistresses had snubbed the Queen, but Pompadour realised that showing Marie respect eased Louis' guilt and allowed him to have a strong relationship with his children. The Queen often said "If there must be a mistress, better her than any other." She also put all of her effort into bringing fun into the King's melancholy life. Unlike the other females in the King's life, the Marquise de Pompadour accompanied him while hunting, playing cards, and touring properties.[9] She also threw dinner parties for him and put on plays that exalted him. Lastly, the royal mistress reminded Louis of her beauty by frequently commissioning paintings, mostly by François Boucher, that highlighted her exquisite features and hid her aging looks.[9] 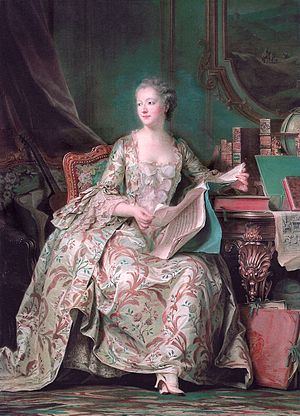 The Marquise de Pompadour was an accomplished woman with a good eye for Rococo interiors. She played a decisive role in making Paris the perceived capital of taste and culture in Europe, and her period of influence was marked with several notable achievements. She was responsible for the development of the manufactory of Sèvres, which became one of the most famous porcelain manufacturers in Europe and which provided skilled jobs for the region. She had a keen interest in literature.[3] She had known Voltaire before her ascendancy, and he apparently advised her in her courtly role. After the War of the Austrian Succession, when economy was the thing the French state needed most, she drew more and more resources into the lavish court. Her influence over Louis increased markedly through the 1750s, to the point where he allowed her considerable leeway in the determination of policy over a whole range of issues, from military matters to foreign relations.[10][11]

Madame de Pompadour was a woman of verve and intelligence.[12] She planned buildings[3] like the Place de la Concorde (then called Place de Louis XV), the military school and the Petit Trianon with her brother, the Marquis de Marigny. She employed the stylish marchands-merciers—trendsetting shopkeepers who turned Chinese vases into ewers with gilt-bronze Rococo handles and mounted writing tables with the new Sèvres porcelain plaques. Numerous other artisans, sculptors and portrait painters were employed, among them the court artist Jean-Marc Nattier, in the 1750s François Boucher, Jean-Baptiste Réveillon and François-Hubert Drouais.[13] She patronized Jacques Guay, the gemstone engraver, who taught her to engrave in onyx, jasper and other precious stones.[14] Moreover, she protected the Physiocrates school (its leader was Quesnay, her own doctor) which paved the way for Adam Smith's theories. She also defended the Encyclopédie edited by Denis Diderot and Jean le Rond d'Alembert against those, among them the Archbishop of Paris Christophe de Beaumont who sought to have it suppressed.[13] 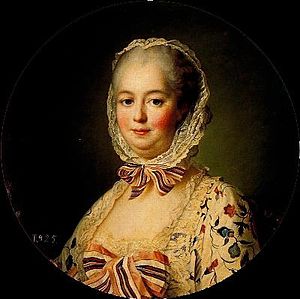 Her memorial portrait finished in 1764 after her death, but begun while she was alive, by her favourite portraitist, François-Hubert Drouais

Madame de Pompadour suffered two miscarriages in 1746 and 1749, and she is said to have arranged lesser mistresses for the King's pleasure to replace herself.[3] Although they had ceased being lovers after 1750, they remained friends, and Louis XV was devoted to her until her death from tuberculosis in 1764 at the age of forty-two.[15] Even her enemies admired her courage during the final painful weeks. Voltaire wrote: "I am very sad at the death of Madame de Pompadour. I was indebted to her and I mourn her out of gratitude. It seems absurd that while an ancient pen-pusher, hardly able to walk, should still be alive, a beautiful woman, in the midst of a splendid career, should die at the age of forty-two."[16] Many of her enemies were, however, greatly relieved. Looking at the rain during the departure of his mistress' coffin from Versailles, the King reportedly said: "La marquise n'aura pas de beau temps pour son voyage." ("The marquise won't have good weather for her journey.")[17] She was buried at the fr (Couvent des Capucines) in Paris.[18]

Portrayals in film and television

Madame de Pompadour has been depicted on screen in film and television on many occasions, beginning with Madame Pompadour directed by Herbert Wilcox in 1927, in which she was played by Dorothy Gish. Other actresses to have played her include: 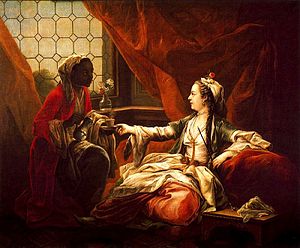 Madame de Pompadour portrayed as a Turkish lady in 1747 by Charles André van Loo, an example of Orientalism in early modern France