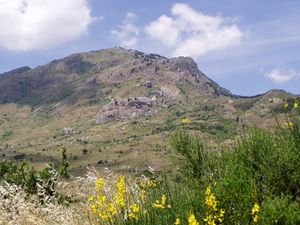 The Madonie (Italian pronunciation: [madoˈniːe]; Sicilian: Madunìi) are one of the principal mountain groups in Sicily, southern Italy, part of the Sicilian portion of the Apennines. It is located in Palermo Province. Apart from Mount Etna, it includes the highest elevations in Sicily: the highest peak of the range is the Pizzo Carbonara (1,979 m), followed by closely neighbouring Pizzo Antenna (1,977 m).

The area and became famous for the Circuito Piccolo delle Madonie, where the Targa Florio race was held from 1906 to 1977.

The mountains were safeguarded in 1989 by the formation of the Parco delle Madonie, a regional natural park. Within the park area there are outcrops of rocks which have been dated over a 200-million-year period and represent all aspects of the geology of Sicily apart from the current volcanic activity. Madonie Geopark is a member of the European Geoparks Network and the UNESCO Global Network of National Geoparks.

There is a wide range of fossils present within the mountains' rocks. Buildings made from these rocks in the Madonie towns often show visible fossils.