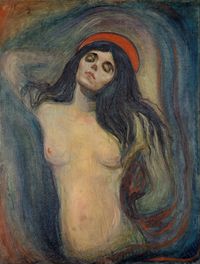 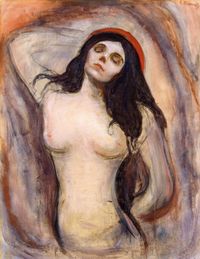 Madonna is the usual title given to a composition by the Norwegian expressionist painter Edvard Munch. Munch painted several versions of the composition, showing a bare-breasted half-length female figure, between 1892 and 1895, using oils on canvas. He also produced versions in print form.[1]

The version owned by the Munch Museum of Oslo was stolen in 2004 but recovered two years later. Two other versions are owned by the National Gallery of Norway and the Kunsthalle Hamburg. Another one is owned by businessman Nelson Blitz, and one was bought in 1999 by Steven A. Cohen.

The lithographic print of the composition is distinguished by a decorative border depicting wriggling sperm, with a fetus-like figure in its bottom left corner. The 1893 version of the painting had a frame with similar decoration, but it was later removed and lost.[1] The print also exists in a number of different versions.

Although it is a highly unusual representation, this painting might be of Mary, the mother of Jesus. Whether the painting is specifically intended as a representation of Mary is disputed. Munch used more than one title, including both "Loving Woman" and "Madonna".[1] Munch is not famous for religious artwork and was not known as a Christian. The affinity to Mary might as well be intended nevertheless, as an emphasis on the beauty and perfection of his friend Dagny Juel-Przybyszewska, the model for the work, and an expression of his worship of her as an ideal of womanhood.[2]

Werner Hofmann suggests that the painting is a "strange devotional picture glorifying decadent love. The cult of the strong woman who reduces man to subjection gives the figure of woman monumental proportions, but it also makes a demon of her."[3] Sigrun Rafter, an art historian at the Oslo National Gallery suggests that Munch intended to represent the woman in the life-making act of intercourse, with the sanctity and sensuality of the union captured by Munch. The usual golden halo of Mary has been replaced with a red halo symbolizing the love and pain duality. The viewer's viewpoint is that of the man who is making love with her. Even in this unusual pose, she embodies some of the key elements of canonical representations of the Virgin: she has a quietness and a calm confidence about her. Her eyes are closed, expressing modesty, but she is simultaneously lit from above; her body is seen, in fact, twisting away from the light so as to catch less of it, even while she faces it with her eyes. These elements suggest aspects of conventional representations of the Annunciation. Robert Melville states that the image portrays "ecstasy and pain in the act of love". Commenting on the lithograph version, he says that the "decorative border [is] composed of sperms trailing long wriggly filaments which meander round three sides of the image and end in a foetus-like pendant."[4] Feminist critic Carol Duncan is inclined to interpret the figure as a femme fatale,

Other critics have also seen the portrayal of the woman as implicitly paradoxical. According to Peter Day, it is a potentially vampiric figure.

Day identifies a "dichotomy" between the haunting image of a monstrous mother and of female subjectivity and self-sufficiency.[6]

For more details on the theft of Munch's paintings, see The Scream § Thefts.

On March 29 1990 a version of Madonna and three other artworks were stolen from the Gallery Kunsthuset AS in Oslo. On June 22 1990 the police located three of the artworks in a private home in Drammen, Norway. The fourth had been located the previous day in a private home in nearby Sande.[7] During the court trials, Ole Christian Bach was suspected of having organized both the theft and the handling. In September 1992, Bach was sentenced to prison for seven months for handling stolen goods.[8]

On Sunday, 22 August 2004, the Munch Museum's versions of Madonna and The Scream were stolen by masked men wielding firearms. The thieves forced the museum guards to lie down on the floor while they snapped the cable securing the paintings to the wall and escaped in a black Audi A6 station wagon, which police later found abandoned.

Both paintings were recovered by the Oslo Police on 31 August 2006. The following day Ingebjørg Ydstie, director of the Munch Museum, said the condition of the paintings was much better than expected and that the damage, including a 2.5 cm hole in the Madonna, could be repaired.[9]

In 2010 a hand-colored version of the print sold for £1.25 million by Bonhams, London, becoming the most expensive print ever sold in Britain.[10]

On 15 February 2013 four Norwegian postage stamps were published by Posten Norge, reproducing images from Munch's art to recognise the 150th anniversary of his birth. A close-up of the Madonna's head from one of the lithographic versions was used for the design of the 17 krone stamp.[11]