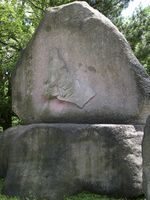 Matsu as she is depicted in a sculpture at the Oyama Shrine in Kanazawa.
In this Japanese name, the family name is Maeda.

Maeda Matsu (前田まつ?), aka Omatsu no Kata (お松の方) (1547–1617), was a Japanese woman of the 16th century. She was the wife of Maeda Toshiie, who founded the Kaga Domain. Matsu had a reputation for intelligence; she was skilled at both literary and martial arts. Her sons—Toshinaga, Toshimasa, and other Toshiie's sons-Toshitsune, Toshitaka, and Toshitoyo were each allowed their own individual title of daimyo and their own private fief. She also had four daughters: Kō, Maahime, Gōhime and Chiyo.