From Infogalactic: the planetary knowledge core
Jump to: navigation, search
In this Japanese name, the family name is Maeda.

Maeda Toshiie (前田 利家?, January 15, 1538 – April 27, 1599) was one of the leading generals of Oda Nobunaga following the Sengoku period of the 16th century extending to the Azuchi-Momoyama period. His father was Maeda Toshimasa. He was the fourth of seven brothers. His childhood name was "Inuchiyo" (犬千代). His preferred weapon was a yari and he was known as "Yari no Mataza" (槍の又左), Matazaemon (又左衛門) being his common name. The highest rank from the court that he received is the Great Counselor Dainagon (大納言).

Toshiie was born in the village of Arako (present-day Nakagawa-ku, Nagoya),[1] the fourth son of Maeda Toshimasa, who held Arako Castle. Toshiie served Oda Nobunaga from childhood (first as a page) and his loyalty was rewarded by being allowed to be the head of the Maeda clan, very unusual for a fourth son with no apparent failures among his elder brothers. Just like Nobunaga, Toshiie was also a delinquent, usually dressed in the outlandish style of a kabukimono. It is believed he also became a friend to Kinoshita Tokichiro (later Toyotomi Hideyoshi) in their youth. Just as Hideyoshi was known as Saru, 猴 or "monkey," it is believed that Toshiie was called Inu, 犬 or "dog" by Nobunaga. Due to a long-standing belief that dogs and monkeys are never friendly to each other, Toshiie is often depicted as reserved and stern, in contrast to Hideyoshi's talkative and easy-going nature.

Toshiie began his career as a member of the akahoro-shū (赤母衣衆), the unit under Oda Nobunaga's personal command. He later became an infantry captain (ashigaru taishō 足軽大将) in the Oda army. During his military career, Toshiie made the acquaintance of many important figures, such as Hashiba Hideyoshi,[1] Sassa Narimasa, Akechi Mitsuhide, Takayama Ukon, and others. Toshiie also was a lifelong rival of Tokugawa Ieyasu. After defeating the Asakura clan, Maeda fought under Shibata Katsuie in the Hokuriku area. He was eventually granted a han (Kaga Domain) spanning Noto and Kaga Provinces. Despite its small size, Kaga was a highly productive province which would eventually develop into the wealthiest han in Edo period Japan, with a net worth of 1 million koku (百万石); thus, it was nicknamed Kaga Hyaku-man-goku (加賀百万石).

Toshiie benefited from a core group of very capable senior vassals. Some, like Murai Nagayori and Okumura Nagatomi, were retainers of long standing with the Maeda.

After Nobunaga's assassination at Honnō-ji (本能寺) by Akechi Mitsuhide and Mitsuhide's subsequent defeat by Hideyoshi, he battled Hideyoshi under Shibata's command in the Battle of Shizugatake. After Shibata's defeat, Toshiie worked for Hideyoshi and became one of his leading generals. Later somewhere during this time he was forced to fight another of his friends, Sassa Narimasa. Narimasa was greatly outnumbered and felled by Toshiie, following the major Maeda victory at the Battle of Suemori Castle. Before dying in 1598, Hideyoshi named Toshiie to the council of Five Elders to support Toyotomi Hideyori until he was old enough to take control on his own.[2] However, Toshiie himself was ailing, and could manage to support Hideyori for only a year before he died as well.

Toshiie was succeeded by his son Toshinaga. 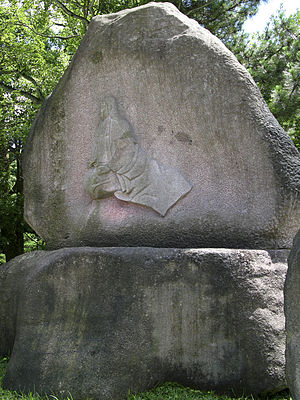 Matsu depicted in a sculpture at the Oyama Shrine in Kanazawa

Toshiie's wife, Maeda Matsu, was famous in her own right. Strong-willed from childhood, she was well-versed in the martial arts and was instrumental in Toshiie's rise to success. After her husband died, Matsu, then known by her Buddhist nun name of Hoshun-in, assured the safety of the Maeda clan after the year 1600 by voluntarily going as a hostage to Edo, capital of the new shogun, Tokugawa Ieyasu, whom she loathed throughout her life as she watched him, her husband, and Hideyoshi compete for power.

Their sons all became daimyo in their own right. Their daughters married into prestigious families; the eldest, Kō, married Maeda Nagatane, a distant relative of Toshiie who became a senior Kaga retainer; Ma'a, was a concubine of Toyotomi Hideyoshi,[2] Gō was adopted by Hideyoshi and became the wife of Ukita Hideie,[2][3] and Chise, who was first wedded to Hosokawa Tadaoki's son Tadataka, later married Murai Nagayori's son Nagatsugu.