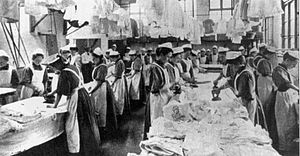 Magdalene asylums, also known as Magdalene laundries, were institutions from the 18th to the late 20th centuries ostensibly to house "fallen women", a term used to imply female sexual promiscuity or work in prostitution. Asylums operated throughout Europe and North America for much of the nineteenth and well into the twentieth century, the last one closing in 1996. The institutions were named after the Biblical figure Mary Magdalene, in earlier centuries characterised as a reformed prostitute.

The first Magdalene institution was founded in late 1758 in Whitechapel, England,[1] which led to the establishment of a similar institution in Ireland by 1767.[1] The first Magdalene asylum in the United States was the Magdalen Society of Philadelphia, founded in 1800; other North American cities, including New York, Boston, Chicago, and Toronto, quickly followed suit.[2][3] In the nineteenth and early twentieth centuries, Magdalene asylums were common in several countries.[2] By 1900, there were more than 300 asylums in England and more than 20 in Scotland.[1][4]

From the early 1890s to the 1960s, most Australian state capitals had a large convent which contained a commercial laundry where the work was done by mostly teenage girls who were placed in the convent, voluntarily or involuntarily, for reasons such as being destitute, uncontrollable, or picked up by the police.[5] According to James Franklin, the girls came from a variety of very disturbed and deprived backgrounds and were individually hard to deal with in many cases.[6]

Laundry work was regarded as suitable as it did not require much training nor substantial capital expense. Memories of conditions in the convent laundries by former inmates are consistently negative, detailing verbal abuse, and very hard work. In accordance with the traditions of the nuns, much of the day proceeded in silence.[7] Like orphanages, they received almost no government funds. As in any underfunded institution, the food was described as bland. The nuns shared the conditions of the inmates, such as the bad food, hard work, the confinement and the long periods of silence. Education for residents was either of poor quality or lacking altogether. There was no physical contact on the part of the sisters, and no emotional contact in the sense of listening to the girls’ own concerns.

Dangers included diseases and workplace accidents. In 1889 one of the sisters of Abbotsford lost her hand in an accident involving a laundry machinery.[8] Conditions of manual work were harsh everywhere. The state-run Parramatta Girls Home, which also had a laundry, had similar harsh conditions but a worse record for assaults.[9]

The asylums were initially established as refuges, with the residents free to leave. In the early 1900s, they reluctantly began to accept court referrals.[8] "They took in girls whom no-one else wanted and who were forcibly confined, contrary to the wishes of both the girls and the nuns."[6] A 1954 report of the Sun Herald of a visit to the Ashford laundry found 55 girls there involuntarily, 124 voluntary inmates including 65 mentally challenged adult women and about 30 who were originally there involuntarily but had stayed on, with dormitories described as seriously overcrowded.[10]

A network of asylums across Canada were operated by the Congregation of the Sisters of Misericorde, which was founded in 1848. According to the Catholic Encyclopedia: "In receiving patients no discrimination is made in regard to religion, colour, or nationality. After their convalescence, those who desire to remain in the home are placed under a special sister and are known as 'Daughters of St. Margaret'. They follow a certain rule of life but contract no religious obligations. Should they desire to remain in the convent, after a period of probation, they are allowed to become Magdalens and eventually make the vows of the Magdalen institute."[11] The order also ran several other types of institutions, including some in the United States.[citation needed]

The first Magdalen institution, Magdalen Hospital for the Reception of Penitent Prostitutes, was founded in late 1758 in London and was active to 1966.[1] 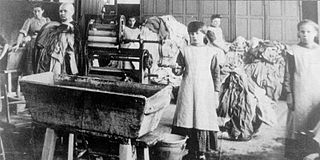 An estimated 30,000 women were confined in Irish asylums. The first asylum in Ireland opened on Leeson Street in Dublin in 1765, founded by Lady Arabella Denny. The last Irish asylum closed in 1996. In Belfast, in Northern Ireland, the Church of Ireland-run Ulster Magdalene Asylum was founded in 1839, while parallel institutions were run by Catholics and Presbyterians.[12][13]

A mass grave containing 155 corpses was discovered in 1993 at the grounds of a former convent in Dublin.[14] This eventually led to media revelations about the operations of the secretive institutions. A formal state apology was issued in 2013, and a €60 million compensation scheme was set up. The Vatican and the four religious institutes that ran the Irish asylums have refused to compensate the survivors of abuse, despite demands from the Irish government, the UN Committee on the Rights of the Child and the UN Committee Against Torture.[15][16][17][18]

The Magdalene Sisters, a 2002 film by Peter Mullan, is based on historical facts about four young women incarcerated in a Dublin Magdalene Laundry from 1964 to 1968.

Senator Martin McAleese's report on the Laundries glossed over[according to whom?] details of the abuse.[19] In 2013 the BBC did a special investigation, Sue Lloyd Roberts "Demanding justice for women and children abused by Irish nuns." [20] The Sisters of Mercy, Sisters of Our Lady of Charity of the Good Shepherd, and Sisters of Charity, have ignored requests by the UN Committee on the Rights of the Child and the UN Committee Against Torture to contribute to the compensation fund for victims including 600 still alive in March 2014.[21]

Asylum records show that in the early history of the Magdalene movement, many women entered and left the institutions of their own accord, sometimes repeatedly. Lu Ann De Cunzo wrote in her book, Reform, Respite, Ritual: An Archaeology of Institutions; The Magdalene Society of Philadelphia, 1800-1850,[22] that the women in Philadelphia's asylum "sought a refuge and a respite from disease, the prison or almshouse, unhappy family situations, abusive men and dire economic circumstances."[citation needed] In its early years, the Magdalen Society Asylum functioned as a refuge for prostitutes. Most of these stayed only a few days or a few weeks, just long enough to get reclothed and recuperated. Attempts at rehabilitation met with little success. In 1877, the asylum was changed into a home for wayward girls, with a rule requiring a stay for twelve months. As the Magdalen Society Asylum became more selective, relaxed its emphasis on personal guilt and salvation, and standardized in some respects the treatment of the inmates, its rate of failure diminished.[23]

The Female Penitent's Refuge Society of Boston was incorporated in 1823.[24]

New York's Magdalen Society was established in 1830 with the purpose of rescuing women from lives of prostitution and vice— sometimes kidnapping them from brothels. In 1907 a new home was established in the Inwood section of Manhattan. This was the second time the Society found it necessary to move to a larger facility. Many of the young women who passed through the doors of the Inwood institution had worked the taverns, brothels and alleyways of lower Manhattan before being “rescued” by the Society. Girls were generally committed for a period of three years. Through the years several girls died or were injured climbing out of windows in failed escape attempts. In 1917 the Magdalen Benevolent Society changed its name to Inwood House. In the early 1920s bichloride of mercury was commonly used to treat new arrivals for venereal disease, resulting in a number of cases of mercury poisoning. The property was later sold and the agency relocated. Inwood House continues to operate, with its main focus on teen pregnancy.[25]