Rosslyn Hill Mining is wholly owned by and the principal operating asset of Canadian company Ivernia Inc., an international base metals mining, exploration and development company listed on the Toronto Stock Exchange (TSX) under the symbol IVW. Enirgi Group Corporation, an Australian firm is majority shareholder in Ivernia, Inc. [1] [2]

The Magellan Mine is an open cut cerussite (lead carbonate) mine and concentrating facility.[3] The mine is now known as Paroo Station Mine.[1]

The company was formerly known Magellan Metals first registered in 1996.[4] The company has faced challenges with operating and transporting the lead to export markets.[5]

Following the reported deaths of native birds at Esperance in Western Australia between December 2006 and March 2007, it was discovered that lead being exported through the town's Port had caused or contributed to their deaths.

On 12 March 2007, the Board of the Esperance Port Authority put an immediate stop to any further shipments of lead carbonate through the Port.

A Parliamentary Inquiry into the event was instigated and investigated the bird deaths, high blood-lead levels in Esperance residents and the contamination of the town's water tanks.

The Parliamentary Inquiry report[6] was published in November 2007.

The Inquiry found that the issues were complex and involved multiple parties including the Esperance Port Authority and the Department of Environment and Conservation (DEC).

The DEC subsequently instigated legal action against the Esperance Port Authority on various matters relating to polluting the Esperance town site. The Port entered a guilty plea in October 2009 on most charges against it and was subsequently fined A$525,000 under the WA Environmental Protection Act 1986, the biggest fine ever under the Act.[7]

The government is spending an estimated A$20 million on the cleanup in Esperance.[8] Magellan agreed to make a voluntary contribution of A$9 million to the Western Australian State Government towards the cleanup of Esperance and separate A$1 million for community projects in the town. 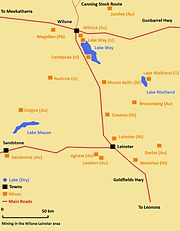 Mining in the Wiluna-Leinster area.

The sealed shipment process[10] used by Magellan Metals is a method of transporting concentrate in sealed, doubled lined bags inside locked steel shipping on rail from the mine site near Wiluna to the Port.

As part of the process for approving the updated Operating Conditions the Minister received advice from the Environmental Protection Authority of Western Australia (EPA) that “the current transport and handling methods are more than sufficient to protect human health and the environment”, that “The transportation of bulk bags in shipping containers is over and above what is required and is best practice”.[11]

The sealed shipment process was developed following issues with the bulk loading of lead carbonate concentrate at the Port of Esperance in 2006/07, which resulted in fugitive dust emissions, and the Magellan Mine being placed on care and maintenance in 2007.

In August 2009, after extensive community and Government consultation, Magellan Metals obtained final approvals to commence bagged and containerised sealed shipments of lead carbonate concentrate through the Port of Fremantle.

In late 2010 Magellan advised the Office of Environmental Protection Authority (OEPA) that airborne lead above baseline levels may have been identified within a small number of sealed containers. The Minister for Environment issued a Stop Order on 31 December 2010.[12]

In late February 2011 the Government lifted the Stop Order to enable Magellan Metals to commence transporting again.[15] However, after two further interruptions to the transport process in February and March the company’s owner, Ivernia Inc, placed the Magellan Mine operations on care and maintenance on 7 April 2011[16] in order to undertake a comprehensive review of the sealed shipment process.

During the period from April 2011 to July 2012, Magellan Metals undertook a complete review of its operating procedures to ensure the integrity of the sealed shipment process. Western Australian Government agencies also investigated and reviewed the events of early 2011 and confirmed that Magellan Metals had not breached its Operating Conditions and no action would be taken against the company.