From Infogalactic: the planetary knowledge core
Jump to: navigation, search
For other uses, see Magician. 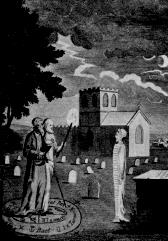 A magician is a practitioner of magic who attains objectives or acquires knowledge using supernatural means.[1]

Some modern magicians, such as Aleister Crowley and those who follow the traditions of the Hermetic Order of the Golden Dawn and Ordo Templi Orientis, describe magic in rational terms, using definitions, postulates and theorems.[2] Aleister Crowley said "the magician of the future will use mathematical formulas".[2]

The paranormal kind of magician (unlike the stage illusionist) can also be referred to as an enchanter, wizard, mage, magus or thaumaturgist. These overlapping terms may be distinguished by some traditions or some writers. When such distinctions are made, sorcerers are more often practitioners of evocations or black magic,[citation needed] and there may be variations on level and type of power associated with each name.

Some names, distinctions or aspects may have more of a negative connotation than others, depending on the setting and the context. (See also Magic and Magic and religion, for some examples.)

Many illusionists attempting parlor tricks and sleight of hand receive the title of magician whether it be by label or self description. A wizard, in this case, is a person who claims to be aptly skilled in arts considered hidden or arcane.

Throughout history, there have been many who have claimed having secret knowledge was a result of supernatural powers, insofar as certain platitudes alluding to an ability and knowledge of the occult (literally, "hidden") techniques often felt could be of great importance. Perhaps the oldest example of this is knowledge of the jealously guarded secret of the making and tending of fire.[3][4]

In particular, the practice of alchemy contains many elements that in the modern era would now be considered magical, while other sciences unknown by practitioners of the past have been incorporated into the study and application of chemistry.

Legends in medieval Europe attributed Virgil with prophetic powers, and sometimes more magical abilities, as in the fairy tale "Virgilius the Sorcerer" collected in The Violet Fairy Book. The figure of Faust appears to have been based on an actual alchemist, Johann Georg Faust, who was accused in his lifetime of practising magic. Merlin, a magician of Arthurian Legend, is among many other legendary characters with a basis in fact or, indeed, pure fiction.