Lua error in Module:Redirect at line 61: could not parse redirect on page "Partial magma". 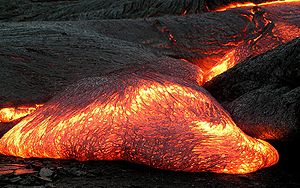 Lava flow on Hawaii. Lava is the extrusive equivalent of magma.

Magma (from Greek μάγμα, "thick unguent") is a mixture of molten or semi-molten rock, volatiles and solids[1] that is found beneath the surface of the Earth, and is expected to exist on other terrestrial planets. Besides molten rock, magma may also contain suspended crystals, dissolved gas and sometimes gas bubbles. Magma often collects in magma chambers that may feed a volcano or solidify underground to form an intrusion. Magma is capable of intrusion into adjacent rocks (forming igneous dikes and sills), extrusion onto the surface as lava, and explosive ejection as tephra to form pyroclastic rock.

Environments of magma formation and compositions are commonly correlated. Environments include subduction zones, continental rift zones,[3] mid-ocean ridges and hotspots. Despite being found in such widespread locales, the bulk of the Earth's crust and mantle is not molten. Except for the liquid outer core, most of the Earth takes the form of a rheid, a form of solid that can move or deform under pressure. Magma, as liquid, preferentially forms in high temperature, low pressure environments within several kilometers of the Earth's surface.

While the study of magma has historically relied on observing magma in the form of lava outflows, magma has been encountered in situ three times during geothermal drilling projects—twice in Iceland (see #Magma usage for energy production below), and once in Hawaii.[4][5][6]

Melting of solid rocks to form magma is controlled by three physical parameters: its temperature, pressure, and composition. Mechanisms are discussed in the entry for igneous rock.

When rocks melt they do so incrementally and gradually; most rocks are made of several minerals, all of which have different melting points, and the physical/chemical relationships controlling melting are complex. As a rock melts, its volume changes. When enough rock is melted, the small globules of melt (generally occurring in between mineral grains) link up and soften the rock. Under pressure within the earth, as little as a fraction of a percent partial melting may be sufficient to cause melt to be squeezed from its source. Melts can stay in place long enough to melt to 20% or even 35%, but rocks are rarely melted in excess of 50%, because eventually the melted rock mass becomes a crystal and melt mush that can then ascend en masse as a diapir, which may then cause further decompression melting.

The Iceland Deep Drilling Project, while drilling several 5000m holes in an attempt to harness the heat in the volcanic bedrock below the surface of Iceland, struck a pocket of magma at 2,100m. Being only the third time in recorded history that magma had been reached, IDDP decided to invest in the hole, naming it IDDP-1.

A cemented steelcase was constructed in the hole with a perforation at the bottom close to the magma. The high temperatures and pressure of the magma steam were used to generate 36MW of power, making IDDP-1 the world’s first magma-enhanced geothermal system.[7]

At high degrees of partial melting of the mantle, komatiite and picrite are produced.

Magma develops within the mantle or crust when the temperature-pressure conditions favor the molten state. Magma rises toward the Earth's surface when it is less dense than the surrounding rock and when a structural zone allows movement. Magma develops or collects in areas called magma chambers. Magma can remain in a chamber until it cools and crystallizes forming igneous rock, it erupts as a volcano, or moves into another magma chamber.

There are two known processes by which magma ceases to exist: by volcanic eruption, or by crystallization within the crust or mantle to form a pluton. In both cases the bulk of the magma eventually cools and forms igneous rocks.

When magma cools it begins to form solid mineral phases. Some of these settle at the bottom of the magma chamber forming cumulates that might form mafic layered intrusions. Magma that cools slowly within a magma chamber usually ends up forming bodies of plutonic rocks such as gabbro, diorite and granite, depending upon the composition of the magma. Alternatively, if the magma is erupted it forms volcanic rocks such as basalt, andesite and rhyolite (the extrusive equivalents of gabbro, diorite and granite, respectively).

During a volcanic eruption the magma that leaves the underground is called lava. Lava cools and solidifies relatively quickly compared to underground bodies of magma. This fast cooling does not allow crystals to grow large, and a part of the melt does not crystallize at all, becoming glass. Rocks largely composed of volcanic glass include obsidian, scoria and pumice.

Before and during volcanic eruptions, volatiles such as CO2 and H2O partially leave the melt through a process known as exsolution. Magma with low water content becomes increasingly viscous. If massive exsolution occurs when magma heads upwards during a volcanic eruption, the resulting eruption is usually explosive.

Silicate melts are composed mainly of silicon, oxygen, aluminium, alkalis (sodium, potassium, calcium), magnesium and iron. Silicon atoms are in tetrahedral coordination with oxygen, as in almost all silicate minerals, but in melts atomic order is preserved only over short distances. The physical behaviours of melts depend upon their atomic structures as well as upon temperature and pressure and composition.[8]

Viscosity is a key melt property in understanding the behaviour of magmas. More silica-rich melts are typically more polymerized, with more linkage of silica tetrahedra, and so are more viscous. Dissolution of water drastically reduces melt viscosity. Higher-temperature melts are less viscous.

Characteristics of several different magma types are as follows:

SiO2 < 45%
Fe–Mg > 8% up to 32%MgO
Temperature: up to 1500°C
Viscosity: Very Low
Eruptive behavior: gentle or very explosive (kimberilites)
Distribution: divergent plate boundaries, hot spots, convergent plate boundaries; komatiite and other ultramafic lavas are mostly Archean and were formed from a higher geothermal gradient and are unknown in the present

At any given pressure and for any given composition of rock, a rise in temperature past the solidus will cause melting. Within the solid earth, the temperature of a rock is controlled by the geothermal gradient and the radioactive decay within the rock. The geothermal gradient averages about 25 °C/km with a wide range from a low of 5–10 °C/km within oceanic trenches and subduction zones to 30–80 °C/km under mid-ocean ridges and volcanic arc environments.

As magma buoyantly rises it will cross the solidus-liquidus and its temperature will reduce by adiabatic cooling. At this point it will liquefy and if erupted onto the surface will form lava. Melting can also occur due to a reduction in pressure by a process known as decompression melting.[9]

It is usually very difficult to change the bulk composition of a large mass of rock, so composition is the basic control on whether a rock will melt at any given temperature and pressure. The composition of a rock may also be considered to include volatile phases such as water and carbon dioxide.

The presence of volatile phases in a rock under pressure can stabilize a melt fraction. The presence of even 0.8% water may reduce the temperature of melting by as much as 100 °C. Conversely, the loss of water and volatiles from a magma may cause it to essentially freeze or solidify.

Also a major portion of all magma is silica, which is a compound of silicon and oxygen. Magma also contains gases, which expand as the magma rises. Magma that is high in silica resists flowing, so expanding gases are trapped in it. Pressure builds up until the gases blast out in a violent, dangerous explosion. Magma that is relatively poor in silica flows easily, so gas bubbles move up through it and escape fairly gently.