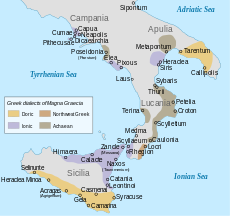 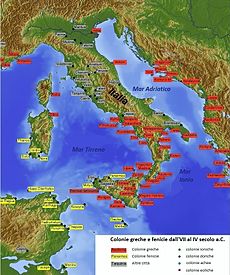 Magna Graecia (/ˌmæɡnə ˈɡriːsiə, ˈɡriːʃə/, US /ˌmæɡnə ˈɡreɪʃⁱə/; Latin meaning "Great Greece", Greek: Μεγάλη Ἑλλάς, Megálē Hellás) is the name of the coastal areas of Southern Italy on the Tarentine Gulf that were extensively populated by Greek settlers; particularly the Achaean settlements of Croton, and Sybaris, and to the north, the settlements of Cumae and Neapolis.[1] The settlers who began arriving in the 8th century BC brought with them their Hellenic civilization, which was to leave a lasting imprint in Italy, such as in the culture of ancient Rome, in which the Roman poet Ovid in his poem Fasti referred to the south of Italy as the land of greater Greece.

In the 8th and 7th centuries BC, for various reasons, including demographic crises (famine, overcrowding, etc.), the search for new commercial outlets and ports, and expulsion from their homeland, Greeks began to settle in southern Italy (Cerchiai, pp. 14–18). Also during this period, Greek colonies were established in places as widely separated as the eastern coast of the Black Sea, Eastern Libya and Massalia (Marseille). They included settlements in Sicily and the southern part of the Italian Peninsula. The Romans called the area of Sicily and the foot of Italy Magna Graecia (Latin, “Great Greece”), since it was so densely inhabited by the Greeks. The ancient geographers differed on whether the term included Sicily or merely Apulia and Calabria — Strabo being the most prominent advocate of the wider definitions.[citation needed]

With this colonization, Greek culture was exported to Italy, in its dialects of the Ancient Greek language, its religious rites and its traditions of the independent polis. An original Hellenic civilization soon developed, later interacting with the native Italic civilisations. The most important cultural transplant was the Chalcidean/Cumaean variety of the Greek alphabet, which was adopted by the Etruscans; the Old Italic alphabet subsequently evolved into the Latin alphabet, which became the most widely used alphabet in the world.[citation needed]

Following the Pyrrhic War in the 3rd century BC, Magna Graecia was absorbed into the Roman Republic.[citation needed]

During the Early Middle Ages, following the disastrous Gothic War, new waves of Byzantine Christian Greeks came to Southern Italy from Greece and Asia Minor, as Southern Italy remained loosely governed by the Eastern Roman Empire. The iconoclast emperor Leo III appropriated lands that had been granted to the Papacy in southern Italy[2] and the Eastern Emperor loosely governed the area until the advent of the Lombards then, in the form of the Catapanate of Italy, superseded by the Normans.[citation needed]

A remarkable example of this influence is the Griko-speaking minority which still exists today in the Italian regions of Calabria and Apulia. Griko is the name of a language combining ancient Doric, Byzantine Greek, and Italian elements, spoken by few people in some villages in the Province of Reggio Calabria and Salento. There is a rich oral tradition and Griko folklore, limited now, though once numerous, to around 30,000 people most of them having become absorbed into the surrounding Italian element. Some believe[who?] that the origins of the Griko language may ultimately be traced to the colonies of Magna Graecia.[citation needed]

Although most of the Greek inhabitants of Southern Italy were entirely Italianized during the Middle Ages (for example, Paestum was by the 4th century BC), pockets of Greek culture and language remained and survived into modernity. This is because of continuous migration between southern Italy and the Greek mainland. One example are the Griko people who still maintain their Greek language and customs.[citation needed]

For example, Greeks re-entered the region in the 16th and 17th century in reaction to the conquest of the Peloponnese by the Ottoman Empire. Especially after the end of the Siege of Coron (1534), large numbers of Greeks took refuge in the areas of Calabria, Salento and Sicily. Greeks from Coroni - the so-called Coronians - were nobles that brought with them substantial movable property. They were granted special privileges and tax exemptions.

Other Greeks who moved to Italy came from the Mani Peninsula of the Peloponnese. The Maniots were known for their proud military traditions and for their bloody vendettas. Another portion of these Greeks moved to Corsica; cf. the Corsican vendettas.[citation needed]