From Infogalactic: the planetary knowledge core
Jump to: navigation, search
Not to be confused with electric sail or photon sail.

A magnetic sail or magsail is a proposed method of spacecraft propulsion which would use a static magnetic field to deflect charged particles radiated by the Sun as a plasma wind, and thus impart momentum to accelerate the spacecraft.[1][2] A magnetic sail could also thrust directly against planetary and solar magnetospheres.

The magnetic sail was invented by Dana Andrews and Robert Zubrin working in collaboration in 1988. At that time, Andrews was working on a concept to use a magnetic scoop to gather ions to provide propellant for a nuclear electric ion drive spacecraft, allowing the craft to operate in the same manner of a Bussard ramjet, but without the need for a proton-proton fusion propulsion drive. He asked Zubrin to help him compute the drag that the magnetic scoop would create against the interplanetary medium. Zubrin agreed, but found that the drag created by the scoop would be much greater than the thrust created by the ion drive. He therefore proposed that the ion drive component of the system be dropped, and the device simply used as a sail. Andrews agreed, and the magsail was born. The two then proceeded to elaborate their analysis of the magsail for interplanetary, interstellar, and planetary orbital propulsion in a series of papers published from 1988 through the 1990s.

Principles of operation and design

The magsail operates by creating drag against the local medium (planet's magnetic field, solar wind, or interstellar winds), thereby allowing a spacecraft accelerated to very high velocities by other means, such as a fusion rocket or laser pushed lightsail, to slow down - even from relativistic velocities - without requiring the use of onboard propellant. It can thus reduce the delta-V propulsion required for an interstellar mission by a factor of two. This capability is the most unique feature of the magsail, and perhaps the most significant in the long term.

In typical magnetic sail designs, the magnetic field is generated by a loop of superconducting wire. Because loops of current-carrying conductors tend to be forced outwards towards a circular shape by their own magnetic field, the sail could be deployed simply by unspooling the conductor and applying a current through it.

The solar wind is a continuous stream of plasma that flows outwards from the Sun: near the Earth's orbit, it contains several million protons and electrons per cubic meter and flows at 400 to 600 km/s (250 to 370 mi/s). The magnetic sail introduces a magnetic field into this plasma flow which can deflect the particles from their original trajectory: the momentum of the particles is then transferred to the sail, leading to a thrust on the sail. One advantage of magnetic or solar sails over (chemical or ion) reaction thrusters is that no reaction mass is depleted or carried in the craft.

For a sail in the solar wind one AU away from the Sun, the field strength required to resist the dynamic pressure of the solar wind is 50 nT. Zubrin's proposed magnetic sail design would create a bubble of space of 100 km in diameter (62 mi) where solar-wind ions are substantially deflected using a hoop 50 km (31 mi) in radius. The minimum mass of such a coil is constrained by material strength limitations at roughly 40 tonnes (44 tons) and it would generate 70 N (16 lbf) of thrust,[3] giving a mass/thrust ratio of 600 kg/N. If operated within the solar system, high temperature superconducting wire would be required to make the magsail practical. If operated in interstellar space conventional superconductors would be adequate.

The operation of magnetic sails using plasma wind is analogous to the operation of solar sails using the radiation pressure of photons emitted by the Sun. Although solar wind particles have rest mass and photons do not, sunlight has thousands of times more momentum than the solar wind. Therefore, a magnetic sail must deflect a proportionally larger area of the solar wind than a comparable solar sail to generate the same amount of thrust. However, it need not be as massive as a solar sail because the solar wind is deflected by a magnetic field instead of a large physical sail. Conventional materials for solar sails weigh around 7 g/m2 (0.0014 lb/sq ft), giving a thrust of 0.01 mPa (1.5×10−9 psi) at 1 AU (150,000,000 km; 93,000,000 mi). This gives a mass/thrust ratio of at least 700 kg/N, similar to a magnetic sail, neglecting other structural components.

The solar and magnetic sails have a thrust that falls off as the square of the distance from the Sun.

When close to a planet with a strong magnetosphere such as Earth or a gas giant, the magnetic sail could generate more thrust by interacting with the magnetosphere instead of the solar wind, and may therefore be more efficient.

In order to reduce the size and weight of the magnet of the magnetic sail, it may be possible to inflate the magnetic field using a plasma in the same way that the plasma around the Earth stretches out the Earth's magnetic field in the magnetosphere. In this approach, called mini-magnetospheric plasma propulsion (M2P2), currents that run through the plasma will augment and partially replace the currents in the coil. This is expected to be especially useful far from the Sun, where the increased effective size of a M2P2 sail compensates for the reduced dynamic pressure of the solar wind. The original NASA design[4] proposes a spacecraft containing a can-shaped electromagnet into which a plasma is injected. The plasma pressure stretches the magnetic field and inflates a bubble of plasma around the spacecraft. The plasma then generates a kind of miniaturized magnetosphere around the spacecraft, analogous to the magnetosphere that surrounds the Earth. The protons and electrons which make up the solar wind are deflected by this magnetosphere and the reaction accelerates the spacecraft. The thrust of the M2P2 device would be steerable to some extent, potentially allowing the spacecraft to 'tack' into the solar wind and allowing efficient changes of orbit.

In the case of the (M2P2) system the spacecraft releases gas to create the plasma needed to maintain the somewhat leaky plasma bubble. The M2P2 system therefore has an effective specific impulse which is the amount of gas consumed per newton second of thrust. This is a figure of merit usually used for rockets, where the fuel is actually reaction mass. Robert Winglee, who originally proposed the M2P2 technique, calculates a specific impulse of 200 kN·s/kg (roughly 50 times better than the space shuttle main engine). These calculations suggest that the system requires on the order of a kilowatt of power per newton of thrust, considerably lower than electric thrusters, and that the system generates the same thrust anywhere within the heliopause because the sail spreads automatically as the solar wind becomes less dense. However, this technique is less understood than the simpler magnetic sail and issues of how large and heavy the magnetic coil would have to be[3][5] or whether the momentum from the solar wind can be efficiently transferred to the spacecraft[6] are under dispute.

The expansion of the magnetic field using plasma injected has been successfully tested in a large vacuum chamber on Earth, but the development of thrust was not part of the experiment. A beam-powered variant, MagBeam,[7] is also under development. 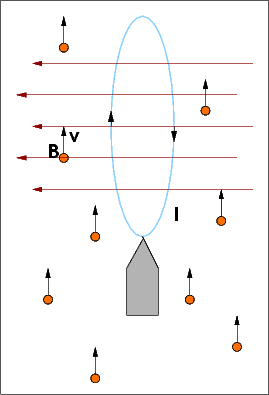 A magnetic sail in a wind of charged particles. The sail generates a magnetic field, represented by red arrows, which deflects the particles into the page. The force on the sail is out of the page.

In a plasma wind

In this mode, the amount of thrust generated by a magnetic sail falls off with the square of its distance from the Sun as the flux density of charged particles reduces. Solar weather also has major effects on the sail. It is possible that the plasma eruption from a severe solar flare could damage an efficient, fragile sail.

A common misconception is that a magnetic sail cannot exceed the speed of the plasma pushing it. As the speed of a magnetic sail increases, its acceleration becomes more dependent on its ability to tack efficiently. At high speeds, the plasma wind's direction will seem to come increasingly from the front of the spacecraft. Advanced sailing spacecraft might deploy field coils as "keels," so the spacecraft could use the difference in vector between the solar magnetic field and the solar wind, much as sailing yachts do.

Inside a planetary magnetosphere

The range of maneuvers available to a magnetic sail inside a planetary magnetosphere are more limited than in a plasma wind. Just as with the more familiar small-scale magnets used on Earth, a magnetic sail can only be attracted towards the magnetosphere's poles or repelled from them, depending on its orientation.

The thrust that a magnetic sail delivers within a magnetosphere decreases with the fourth power of its distance from the planet's internal magnetic dynamo.

This limited maneuvering capability is still quite useful. By varying the magnetic sail's field strength over the course of its orbit, a magnetic sail can give itself a "perigee kick" raising the altitude of its orbit's apogee.

Repeating this process with each orbit can drive the magnetic sail's apogee higher and higher, until the magnetic sail is able to leave the planetary magnetosphere and catch the solar wind. The same process in reverse can be used to lower or circularize the apogee of a magsail's orbit when it arrives at a destination planet.

Interstellar space contains very small amounts of hydrogen. A fast-moving sail would ionize this hydrogen by accelerating the electrons in one direction and the oppositely charged protons in the other direction. The energy for the ionization and cyclotron radiation would come from the spacecraft's kinetic energy, slowing the spacecraft. The cyclotron radiation from the acceleration of particles would be an easily detected howl in radio frequencies.

Thus, in interstellar spaceflight outside the heliopause of a star a magnetic sail could act as a parachute to decelerate a spacecraft. This removes any fuel requirements for the deceleration half of an interstellar journey, which would benefit interstellar travel enormously. The magsail was first proposed for this purpose in 1988 by Robert Zubrin and Dana Andrews, predating other uses, and evolved from a concept of the Bussard ramjet which used a magnetic scoop to collect interstellar material.

Magnetic sails could also be used with beam-powered propulsion by using a high-power particle accelerator to fire a beam of charged particles at the spacecraft.[8] The magsail would deflect this beam, transferring momentum to the vehicle. This would provide much higher acceleration than a solar sail driven by a laser, but a charged particle beam would disperse in a shorter distance than a laser due to the electrostatic repulsion of its component particles. This dispersion problem could potentially be resolved by accelerating a stream of sails which then in turn transfer their momentum to a magsail vehicle, as proposed by Jordin Kare.

The ancestor of the magsail, the Bussard magnetic scoop, first appeared in science-fiction in Poul Anderson's 1967 short story To Outlive Eternity, which was followed by the novel Tau Zero in 1970. The magsail appears as a crucial plot device in The Children's Hour, a Man-Kzin Wars novel by Jerry Pournelle and S.M. Stirling (1991). It also features prominently in the science-fiction novels of Michael Flynn, particularly in The Wreck of the River of Stars (2003); this book is the tale of the last flight of a magnetic sail ship when fusion rockets based on the Farnsworth-Hirsch Fusor have become the preferred technology.