From Infogalactic: the planetary knowledge core
Jump to: navigation, search
For other uses, see Magnificat (disambiguation).

The Magnificat (Latin for: [My soul] magnifies) —also known as the Song of Mary, the Canticle of Mary and in Byzantine tradition the Ode of the Theotokos; Greek: Ἡ ᾨδὴ τῆς Θεοτόκου—is a canticle frequently sung (or spoken) liturgically in Christian church services. It is one of the eight most ancient Christian hymns and perhaps the earliest Marian hymn.[1][2] Its name comes from the first word of the Latin version of the canticle's text.

The text of the canticle is taken directly from the Gospel of Luke (Luke 1:46-55) where it is spoken by the Virgin Mary upon the occasion of her Visitation to her cousin Elizabeth.[1] In the narrative, after Mary greets Elizabeth, who is pregnant with John the Baptist, the child moves within Elizabeth's womb. When Elizabeth praises Mary for her faith, Mary sings what is now known as the Magnificat in response.

Mary's Magnificat, celebrated only in Luke's Gospel, is one of four hymns, distilled from a collection of early Jewish-Christian canticles, which complement the promise/fulfillment theme of Luke's infancy narrative. These songs are Mary's Magnificat; Zechariah's Benedictus (1:67-79); the angels' Gloria in Excelsis (2:13-14); and Simeon's Nunc Dimittis (2:28-32). In form and content, these four psalms are patterned on the "hymns of praise" in Israel's Psalter. In structure, these songs reflect the compositions of pre-Christian contemporary Jewish hymnology. The first stanza displays graphically a characteristic feature of Hebrew poetry—synonymous parallelism—in ascribing praise to God: "my soul" mirrors "my spirit"; "proclaims the greatness" with "has found gladness"; "of the Lord" with "in God my Savior." The balance of the opening two lines bursts out into a dual Magnificat of declaring the greatness of and finding delight in God. The third stanza again demonstrates parallelism, but in this instance, three contrasting parallels: the proud are reversed by the low estate, the mighty by those of low degree, and the rich by the hungry.[3]

Although there is some scholarly discussion of whether the historical Mary herself actually proclaimed this canticle, Luke portrays her as the singer of this song of reversals and the interpreter of the contemporary events taking place. Mary symbolizes both ancient Israel and the Lucan faith-community as the author/singer of the Magnificat.[3]

The canticle echoes several Old Testament biblical passages, but the most pronounced allusions are to the Song of Hannah, from the Books of Samuel (1Samuel 2:1-10). Scriptural echoes from the Torah, the Prophets and the Writings complement the main allusions to Hannah's "magnificat of rejoicing" in l Samuel 2:1-10.[3] Along with the Benedictus, as well as several Old Testament canticles, the Magnificat is included in the Book of Odes, an ancient liturgical collection found in some manuscripts of the Septuagint. 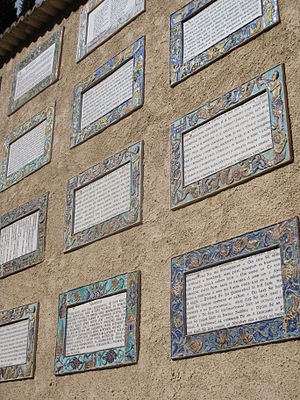 The original language of the Magnificat is Koine Greek, the language of the New Testament. However, in the liturgical and devotional use of the Western Church, it is most often found in Latin or the vernacular.

In Eastern Orthodox worship, the Ode of the Theotokos is accompanied by the following refrain sung between the verses (a sticheron) and called a megalynarion, which is the second part of the Axion Estin hymn:

Τὴν τιμιωτέραν τῶν Χερουβὶμ καὶ ἐνδοξοτέραν ἀσυγκρίτως τῶν Σεραφίμ, τὴν ἀδιαφθόρως Θεὸν Λόγον τεκοῦσαν, τὴν ὄντως Θεοτόκον, σὲ μεγαλύνομεν. ('You who are more to be honoured than the Cherubim and incomparably more glorious than the Seraphim, you who, uncorrupted, gave birth to God the Word, in reality the God-bearer, we exalt you.') 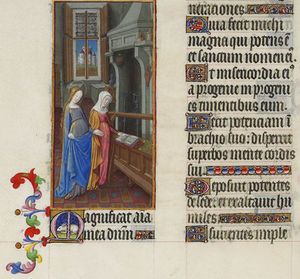 The Visitation in the Book of Hours of the Duc de Berry; the Magnificat in Latin 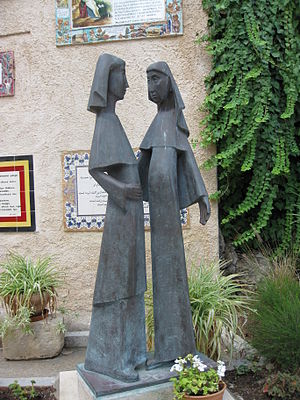 My soul doth magnify the Lord : and my spirit hath rejoiced in God my Saviour.
For he hath regarded : the lowliness of his handmaiden.
For behold, from henceforth : all generations shall call me blessed.
For he that is mighty hath magnified me : and holy is his Name.
And his mercy is on them that fear him : throughout all generations.
He hath shewed strength with his arm : he hath scattered the proud in the imagination of their hearts.
He hath put down the mighty from their seat : and hath exalted the humble and meek.
He hath filled the hungry with good things : and the rich he hath sent empty away.
He remembering his mercy hath holpen his servant Israel : as he promised to our forefathers, Abraham and his seed for ever.

Like all psalms and canticles, the Magnificat is followed by the Lesser Doxology in Anglican services if the Gloria in excelsis Deo is not being said or sung in the same service.

My soul glorifies the Lord, *
my spirit rejoices in God, my Saviour.
He looks on his servant in her lowliness; *
henceforth all ages will call me blessed.

The Almighty works marvels for me. *
Holy his name!
His mercy is from age to age, *
on those who fear him.

He puts forth his arm in strength *
and scatters the proud-hearted.
He casts the mighty from their thrones *
and raises the lowly.

He fills the starving with good things, *
sends the rich away empty.

He protects Israel, his servant, *
remembering his mercy,
the mercy promised to our fathers, *
to Abraham and his sons for ever.

Liturgy of the Hours (ICEL)

My soul proclaims the greatness of the Lord,
my spirit rejoices in God my Savior
for he has looked with favor on his lowly servant.

From this day all generations will call me blessed:
the Almighty has done great things for me,
and holy is his Name.

He has mercy on those who fear him
in every generation.

He has shown the strength of his arm,
he has scattered the proud in their conceit.

He has cast down the mighty from their thrones,
and has lifted up the lowly.

He has filled the hungry with good things,
and the rich he has sent away empty.

He has come to the help of his servant Israel
for he has remembered his promise of mercy,
the promise he made to our fathers,
to Abraham and his children for ever. 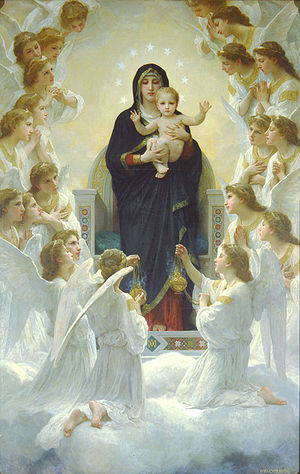 Virgin and Angels by Bouguereau, an example of Marian art

My soul proclaims the greatness of the Lord, my spirit rejoices in God my Saviour;
he has looked with favour on his lowly servant.

From this day all generations will call me blessed;
the Almighty has done great things for me and holy is his name.

He has mercy on those who fear him,
from generation to generation.
He has shown strength with his arm
and has scattered the proud in their conceit,

Casting down the mighty from their thrones
and lifting up the lowly.

He has filled the hungry with good things
and sent the rich away empty.

He has come to the aid of his servant Israel,
to remember his promise of mercy,

The promise made to our ancestors,
to Abraham and his children for ever.

My soul magnifies the Lord,
and my spirit rejoices in God, my Savior;

For He has regarded
the lowliness of His handmaiden.

For behold, from this day
all generations will call me blessed.

For the Mighty One has done great things to me,
and holy is His name;

And His mercy is on those who fear Him
from generation to generation.

He has shown strength with his arm;
He has scattered the proud in the imagination of their hearts.

He has cast down the mighty from their thrones
and has exalted the lowly.

He has filled the hungry with good things,
and the rich He has sent empty away.

He has helped his servant Israel in remembrance of his mercy
as He spoke to our fathers, to Abraham and to his seed forever.

In Eastern Orthodox worship, the Magnificat is usually sung during the Matins service before the Irmos of the ninth ode of the canon. After each biblical verse, i.e. as a sticheron, the following megalynarion or troparion is sung:

"More honourable than the Cherubim, and more glorious beyond compare than the Seraphim, without corruption thou gavest birth to God the Word: true Theotokos, we magnify thee."

As a canticle, the Magnificat has frequently been set to music. Most compositions were originally intended for liturgical use, especially for Vesper services and celebrations of the Visitation, but some are also performed in concert.

As the Magnificat is part of the sung Vespers, many composers, starting with the Renaissance, set the words, for example Claudio Monteverdi in his Vespers for the Blessed Virgin (1610). Vivaldi composed a setting of the Latin text for soloists, choir and orchestra, as did Johann Sebastian Bach in his Magnificat (1723, rev. 1733). Anton Bruckner composed a "Magnificat" for soloists, choir, orchestra and organ. Rachmaninoff, and more recently John Rutter also made settings, inserting additions into the text, as Rutter inserted "Of a Rose, a lovely Rose" and other texts in his Magnificat.[7] Arvo Pärt composed a setting for choir a cappella.

Together with the Nunc dimittis, the Magnificat is a regular part of the Anglican Evensong. The "Mag and Nunc" has been set by many composers - such as Thomas Tallis, Ralph Vaughan Williams, Herbert Sumsion, Charles Wood and John Tavener - of Anglican church music, often for choir a cappella or choir and organ. Since the canticles are sung every day at some cathedrals, Charles Villiers Stanford wrote a Magnificat in every major key, and Herbert Howells published twenty settings over his career.

An Orthodox Church setting of the Magnificat (text in Latin and English) is to be found in the 2011 All-night Vigil (Section 11) by the English composer Clive Strutt.

In Nicaragua, the Magnificat is a favourite prayer among many peasants and is often carried as an amulet. During the Somoza years, campesinos were required to carry proof of having voted for Somoza; this document was mockingly referred to as the Magnificat.[8]