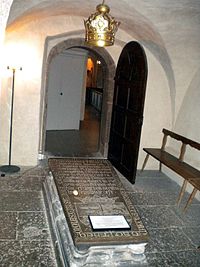 This 16th-century grave monument at Vreta is thought to have been for King Magnus II (not Magnus I as the stone shows), though his actual burial probably took place elsewhere within the cloister compound, now in ruins.[1]

Magnus II; Swedish: Magnus Henriksson (died 1161) was a Danish lord and King of Sweden between 1160 and 1161, thereafter treated as a usurper.

His mother was Ingrid Ragvaldsdotter, a granddaughter of Inge I. His father was the Danish lord Henrik Skatelår, son of an illegitimate son of king Sweyn II of Denmark.

Magnus, a claimant to the competed throne, ambushed and killed Eric the Saint as he left the church in Uppsala on May 18, 1160. He reigned as king of almost all of Sweden until he was murdered by the men of Charles Sverkerson, the rival king, the year after.