Magnus I of Sweden

King Magnus III of Sweden, in Swedish "Magnus Ladulås", was at times in error called "Magnus I". 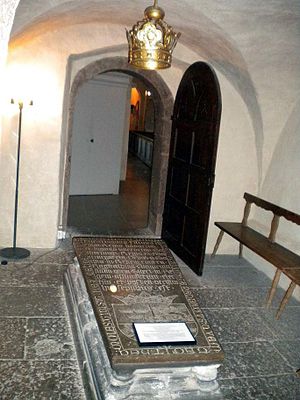 The grave monument of King Magnus was placed at Vreta in the 16th century but is a cenotaph – the location of his actual burial is not known.

Magnus I (Swedish: Magnus Nilsson ; Danish: Magnus Nielsen[1]) (born about 1106, died 4 June 1134 in the Battle of Fotevik), was a Danish duke who ruled Gothenland in southern Sweden from 1125 to 1130. His status as ruler of Sweden was disputed in his own time, but today he is recognized as one of the historical Swedish monarchs.[2][3] Snorri Sturlason invented an epithet for him: Magnus the Strong.

Magnus was the son of King Niels I of Denmark and Margaret Fredkulla, the second or eldest daughter of King Inge the Elder of Sweden.

When Margaret's first cousin King Inge the Younger died in 1125, Magnus claimed the throne as the eldest grandson of Inge the Elder. Magnus was recognized by the Geats (Göterna) of Gothenland, but according to the Westrogothic law, had to be accepted also by the Swea, another tribe to the north of the Geats. The Swea, however, had selected Ragnvald Knaphövde. According to Saxo Grammaticus, Ragnvald had shown disrespect towards the Geats by not taking a Geat hostage. As retaliation, Ragnvald was murdered by Magnus's supporters not long after.

Around 1127, Magnus married Richeza, daughter of Boleslaw III of Poland. In 1130, Magnus backed Boleslaw III in conquering Rügen. The Polish forces together with a Danish fleet compelled the Rani to recognize Polish rule over the island.[4] Magnus is not mentioned as King in the law of Västergötland and was probably ousted from Sweden by his successor Sverker I of Sweden around 1130.

In 1131, Magnus had his cousin and potential rival for the Danish throne, Canute Lavard, murdered, in order to position himself as heir presumptive to his father King Niels.[1] Though he was eventually backed by Niels, Magnus found himself in a civil war against Lavard's half-brother Eric Emune.[1] He died on 4 June 1134 during the Battle of Fotevik in Scania, where his father was also decisively defeated. Niels died later the same year.

After Magnus's death, his widow Richeza returned to the other side of the Baltic Sea where she married Volodar of Minsk, a Rurikid ruler of Viking origins. She later returned to Sweden and thirdly married the man who defeated Magnus, King Sverker I.