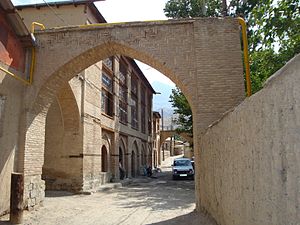 Mahalle (Arabic: محلة‎‎ maḥallä) (abbreviated mh. or mah.) is an Arabic word, adopted into Turkish, which is variously translated as district, quarter, ward, or "neighborhood." [2] It is an official administrative unit in many Middle Eastern countries. In the Ottoman Empire, the mahalle was the smallest administrative entity. The mahalle is generally perceived to play an important role in identity formation, with the local mosque and the local coffee house as the main social institutions. It lies at the intersection of private family life and the public sphere. Important community-level management functions are performed through mahalle solidarity, such as religious ceremonies, life-cycle rituals, resource management and conflict resolution.[3]

The mahalle is represented in the municipality and government by its muhtar. The muhtarlık (the office of muhtar) has been designed as the smallest administrative office, with representative and enforcement powers at the local level. However, in some cases, the muhtar acts as not only the representative of the government towards the community but also the head of the community towards the government and subverts official government policies through intricate face-to-face mahalle-level relationships.[3]