Mahavir Jayanti, also known as Mahavir Janma Kalyanak, is the most important religious holiday for Jains. It celebrates the birth of Mahavira, twenty fourth and the last Tirthankara of the present time cycle. On the Gregorian calendar, the holiday occurs either in March or April.[3]

Most modern historians consider Vasokund as Mahavira's birthplace.[4] According to Jain texts, Mahavira was born on the thirteenth day of the bright half of the moon in the month of Chaitra in the year 599 BCE.[5] Mahavira was born in a democratic kingdom (Ganarajya), Vajji, where the king was chosen by votes. Vaishali was its capital.[6]

As a child, Mahavira was called with the name 'Vardhamana', which means "One who grows", because of the increased prosperity in the kingdom at the time of his birth.[7]

Today, though Jain families are not present at Vasokund, Mahavira is still much revered by the villagers. A place called Ahalya bhumi has not been ploughed for hundreds of years by the family that owns it, as it is considered to be the birthplace of Mahavira.[6] 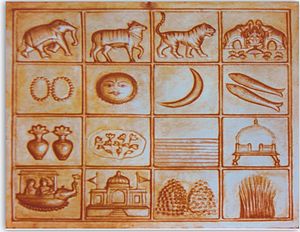 Sixteen auspicious dreams seen by the mother of all Tirthankaras

Mahavira was born into royalty as the son of King Siddartha of Kundgraam and Queen Trishala. During her pregnancy, Trishala was believed to have had a number of auspicious dreams, all signifying the coming of a great soul. The exact number of dreams differs according to the school of Jainism; Svetambaras generally believe that the actual number is fourteen while Digambaras claim sixteen instead. Regardless, the astrologers who interpreted these dreams claimed that the child would become either a Chakravarti or a Tirthankara. It is said that when Queen Trishala gave birth to Mahavira, the god-king Indra bathed the newborn himself with celestial milk, a ritual essentially marking him as a Tirthankara. 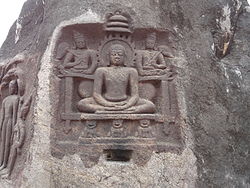 The idol of Mahavira is carried out on a chariot, in a procession called rath yatra.[8] On the way bhajans (religious rhymes) are recited.[9] Local statues of Mahavira are given a ceremonial bath called the abhisheka. During the day, most members of the Jain community engage in some sort of charitable act. Many devotees visit temples dedicated to Mahavira to meditate and offer prayers. Lectures by monks and nuns are held in temples to preach the path of virtue as defined by Jainism. Donations are collected in order to promote charitable missions like saving cows from slaughter or helping to feed poor people. Ancient Jain temples across India typically see an extremely high volume of practitioners come to pay their respects and join in the celebrations.

Ahimsa runs [10] and rallies preaching the Mahavira's message of Ahiṃsā are taken out on this day.[11][12]

On April 1, 2015, President of India extended his greeting on the occasion of Mahavir Jayanti.[13]

Many political leaders and government officials extend their greetings on this occasion.[14][15]