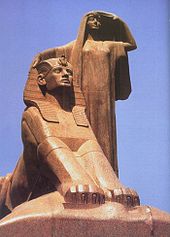 Mahmoud Mukhtar (Arabic: محمود مختار‎‎) (May 10, 1891 - March 28, 1934) was an Egyptian sculptor. He attended the School of Fine Arts in Cairo upon its opening in 1908 by Prince Yusuf Kamal[1], and was part of the original "Pioneers" of the Egyptian Art movement. Despite his early death, he greatly impacted the realization and formation of contemporary Egyptian art. His work is credited with signaling the beginning of the Egyptian modernist movement, and he is often referred to as the father of modern Egyptian sculpture.

Born in the Nile Delta in a small village called Douar skouila, in the region of Mahalla al-Kubra, in the village of Tanbara, where his father was the mayor ('Omda). Mukhtar moved to Cairo as a child with his mother, and in 1908 joined the newly founded Egyptian School of Fine Arts. He was highly influenced by Laplagne, who was the director of the school and a professor of sculpture. In 1911, he was granted a scholarship to study art in Paris at the Ecole des Beaux Arts.

In France, he befriended members of the Wafd Party and was inspired to create the prototype of his famous statue, Nahdit Misr aka "Egypt's Renaissance," which was initially unveiled in Ramses Square in 1928 and now stands opposite the Cairo University Bridge.

He was able to demonstrate through his sculpture, “Egyptian Awakening,” of the sphinx and a peasant woman lifting her veil, symbolizing the embracing of Egypt's past and hope for the future as the country moved forward from colonization into a modern age of independence.

Winning many honours and awards in Paris and Cairo, Mokhtar also became famous for his two monumental statues of Saad Zaghlul (one in Alexandria, the other in Cairo). Some of his other well-known sculptures include "The Secret Keeper," "Isis," "The Nile's Bride" and "Khamaseen."